Read the full Our Stories publication online here: https://specialpubs.austcommunitymedia.com.au/e-mags/2021/SJT/0722_01/ JOHNS is a surname synonymous with t... 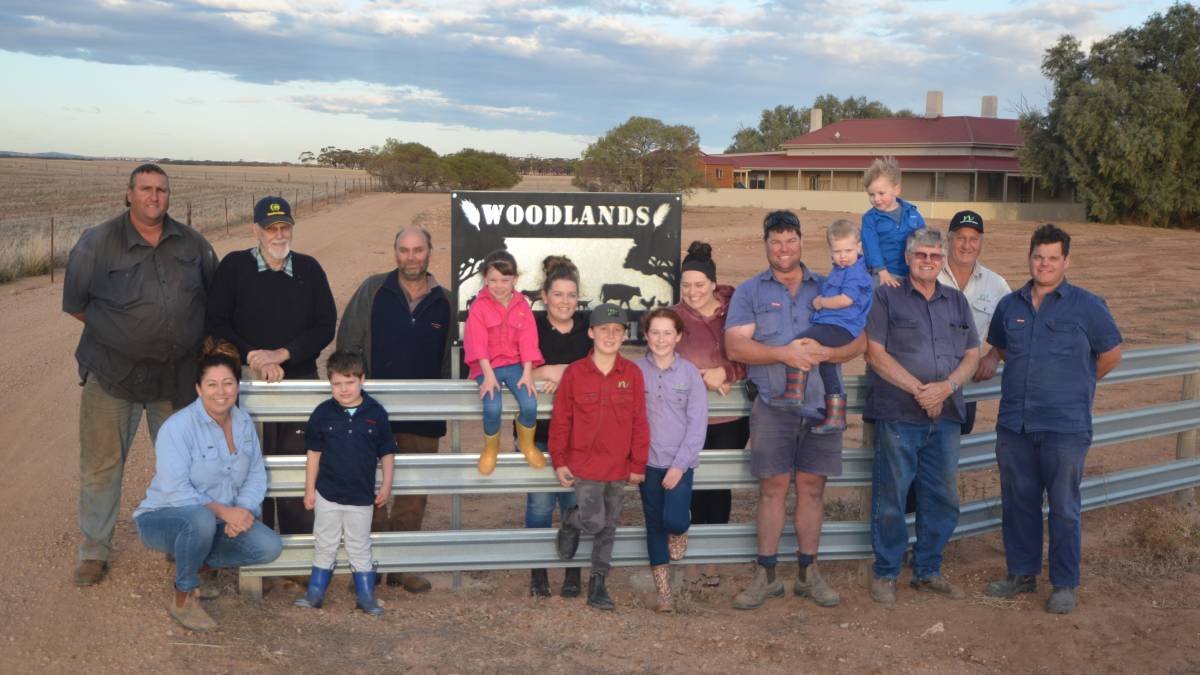 Farming at Pirie East since: 1890s

JOHNS is a surname synonymous with the Pirie East district.

While others have come and gone, numerous branches of the Johns family tree have been farming in the region for 120 years.

Three families, all descendants of Thomas Johns, still remain and while their mutual link is from generations ago, it is evident they stem from the same forebears, all sharing a quick wit, dry sense of humour, a love of farming and family.

All on neighbouring properties between the Spencer and Augusta Highways south of Port Pirie are Philip and Denise Johns, who run a mixed enterprise with sons Byron and Leighton and their respective families; Daryle and Roslyn with sons Steven and Simon on a mixed holding with a large sheep focus; and Brendon and Denise, who have five children and operate a cropping business called Northern Grain.

The Johns farming history dates back more than 200 years to Cornwall, England.

Nicholas Johns and family reached Lyndoch in 1839, before his sixth son Thomas made a move to Nelshaby in 1875.

Thomas - the common ancestor for the remaining three families - then bought a property in Pirie East in 1892 called Woodlands and established roots that remain to this day.

Working with three generations at a time has become tradition for the Johns branch of the family that owns Thomas' original block 'Woodlands'.

Philip and wife Denise farm with sons Byron and Leighton, running a 1300-head self-replacing White Dorper flock and growing 2000ha of barley, 700ha of wheat, as well as vetch, peas and lentils.

Philip said he worked with his father Ron and grandfather Frank, with his boys doing the same.

Philip's father Ron passed away last year, aged 94, and was still helping out on the farm into his 90s.

While Philip said he didn't often make it obvious, he was very proud to see the next generations carrying on the family farming legacy.

The multi-generation tradition is one the family is keen to see continue and is one of the motivations behind their continued expansion.

Since Philip left school to work full-time on the family farm 50 years ago, their holding (a mix of owned and leased) has increased from 850ha to 4400ha.

The livestock mix has also evolved from dairy cows and pigs, to trade wethers, to Dorpers.

"We were heavily involved in the shipper (wether) trade for a long time," Philip said.

"Dad was well known at the Jamestown market because he used to buy a lot of wethers from there. This country is very good fattening country, so we could buy pretty poor sheep and have them on a boat within eight months.

"When that eventually became unviable, Byron was home by that stage and was keen to try Dorpers.

"Having tried them, we switched to them 100 per cent within four or five years because they have advantages like no shearing, they suit the country and fatten on nothing."

"It's good that the Johns' are still going and I'd think Thomas would be pretty proud of what the fourth, fifth, sixth generations are up to." - Philip Johns

While Byron has a natural passion for stock work and manages the livestock side of the farm, Leighton has always steered towards cropping.

"I think that's why it works. Byron manages the stock side of things and Leighton manages the cropping side and I just make sure there's enough money floating around," Philip chuckled.

Both Byron and Leighton said their passion for agriculture was stoked at a young age, spending all of their free time helping out on-farm.

They both now have kids of their own.

Byron and wife Amanda have a daughter Ruby, 5, and son Harry, 3, with the kids the sixth generation of the Johns family to live at the Woodlands homestead.

Leighton and wife Kama have two sons Campbell, 4, and Lawson, 2.

With the passage of time naturally taking branches of families in different directions, the connection the descendants of Thomas still share is rare.

Byron and Brendon's children are seventh cousins, but still live around the corner from each other, catch the school bus together and share the Johns name.

"A new war memorial was put up at Wandearah not too long ago and it turned out of the many that volunteered for the first World War, the Johns' were the only family that were still in the district farming," Philip said.

"It's good that the Johns' are still going and I'd think Thomas would be pretty proud of what the fourth, fifth, sixth generations are up to."

Situated farthest east of the three Johns properties is Dingly Dell, of which Brendon is the fourth generation to call it home.

They have been continuous croppers for 20 years, citing labour and economics as the key drivers for saying goodbye to livestock, and were early adopters of lentils.

Brendon said he and his father began growing them in the early 1990s and they had been a profitable part of their program ever since.

The couple described the Pirie East region as being reliable for cropping, but with no high expectations from year to year.

"It's marginal, but we get reasonable yields and I think a lot of that comes down to technology, rotations and advice we use," Denise said.

"The biggest key to our business is that we surround ourselves with good people..." - Brendon Johns

The hosts of many on-farm trials, Brendon and Denise utilise any new technology available to them, get advice from two agronomists, practice no-till, abide by economies of scale, actively seek marketing opportunities and keep up-to-date with the latest cropping research.

Their approach to farming is unapologetically business-like.

They run an advisory board, with a financial planner, accountant and broker joining them for meetings three times a year to track how the business is performing and where it is heading.

"The biggest key to our business is that we surround ourselves with good people, whether it's suppliers, accountants or advisers," Brendon said.

Brendon is the driving force of the production side of the enterprise, overseeing and working with a full-time worker, part-time mechanic and casual staff during seeding and harvest.

Formerly a school teacher, Denise dived headfirst into the farm business after marrying Brendon. The couple completed a Business Degree together and Denise undertook an agronomy course, before she completed her Masters in Business.

She spends four days a week in the office doing bookkeeping, organising meetings, planning, selling and marketing and is aptly described by her husband as "the face of Northern Grain".

While working together, living together and raising a family together can have its challenges, Brendon and Denise say they both love what they do and make a good partnership.

"We're both on the same page and are very driven people, and very passionate about agriculture," Denise said.

A strong work ethic runs through generations of the family - Brendon recalls his grandma Dulcie rising to light the fire, milk cows and cook breakfast before waking the men up so they could start work.

The fifth generation of Johns on Dingley Dell are already displaying that trademark work ethic, with the kids expected to help on-farm during school holidays.

Though their children are relatively young, Brendon and Denise say many of their business decisions have been made with succession in mind.

The name Northern Grain means the girls will still have a sense of ownership even if they get married and take on a different name, while land purchases have been made with the next generation of the family in mind.

While their sons Steven and Simon currently run 600 Dorpers, crop 500ha of wheat, barley and lentils and operate a small lamb feedlot, Daryle and Roslyn Johns said his family farming business had ventured down many paths in years past.

They had dairy cows until 1964, had a piggery from 1983-94, have been sheep traders, ran Boer goats and grew Eucalyptus trees for cut foliage among other things.

Daryle is a keen historian and has a sense of pride when it comes to the Johns family's association with the district and the good and bad farming years it has provided.

"There have been Johns families in this district for generations," he said.

"At one point, there were five Johns families with adjoining properties. Now there are three remaining."

Daryle and Steven agreed that modern farming techniques had helped transform the region from marginal to reasonably reliable in that time.

What used to be a smattering of cropping paddocks among grazing land is now mostly arable land.

"My father and I were labouring on this house, but it didn't rain at all to sow a crop.

"1982 was the next bad drought. I'd never dragged so much sand in all my life in the header trying to get my seed back. But, in the family's time here, 1914 was the worst drought. They had to send all their draught horses down to Innes National Park to keep them alive and the story goes that when they went to collect them, only one of the 28 horses remembered them."

Continuing on the family farming legacy was never a question for Steven and Simon.

Daryle and Rosyln's third son Mathew realized there wasn't enough work for the three sons on the farm so went to university in Adelaide and has been working in Queensland for the past 15 years.

He has now moved back to Adelaide and is hoping his family can spend more time visiting the farm.

A larrikin through and through, Steven was quick to joke that he wished the family had stayed at Lyndoch, where they could be selling housing blocks, but his love for the industry does eventually shine through.

"If you didn't want to do it, you'd find something else to do."

The Johns family's passion for agriculture has extended into the local Nelshaby Ag Bureau.

Thomas Johns is a life member and joined in 1922 after the Pirie bureau folded and the Nelshaby chapter was established.

Daryle has his 50-year membership badge and Steven has been involved for more than 20 years, while Philip - a 30-year-plus member - and son Leighton are past presidents and Byron is the current treasurer.

Brendon has also notched up more than 20 years membership and is a past president.

"It's a good social gathering and we're very lucky because we have several agronomists that are bureau members and share their knowledge and create good discussion," Daryle said.

"We've got about 50 members and are one of the more active bureaus in the state."