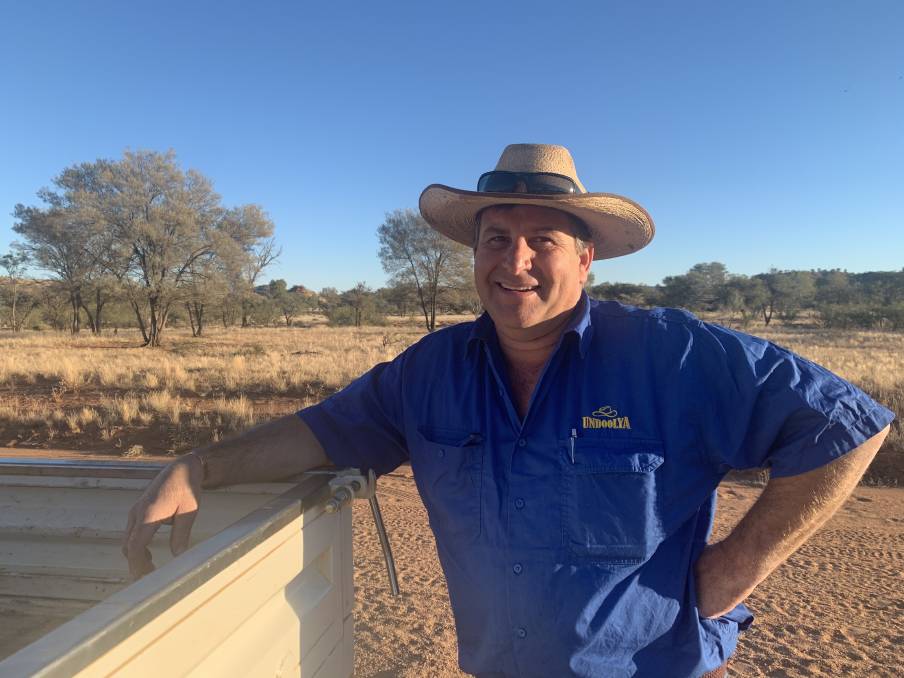 REBUILD BEGINS: Undoolya Station's Ben Hayes will hang onto this season's females instead of selling them, to rebuild his herd after destocking throughout the drought.

AFTER three consecutive years of drought, central Australian cattle producers began selling off some of the largest numbers of stock in the country, reducing local herd sizes by up to 50 per cent.

AFTER three consecutive years of drought, central Australian cattle producers began selling off some of the largest numbers of stock in the country, reducing local herd sizes by up to 50 per cent.

But as NT stations started to rebuild after rain arrived in March, the flow-on effect from years of drought has meant saleyards and local bull sales have begun to feel the pinch, with reduced numbers being offered.

With market cancellations in the past few weeks caused by a lack of cattle hitting the market, Elders Alice Springs branch manager Herbie Neville said it would take a further 18 months before numbers would return to "somewhat normal".

"The stations are back to breeding but with a lot less numbers. They sold a lot more cattle last year because of the continued dry," he said. "Those cattle would normally be sold this year and it is definitely making an impact.

"There are feeder and lighter cattle floating around but virtually no females or calves are being offered."

Mr Neville said the shortage also came from about 90pc of the Territory's females being sold to slaughter for the past few years.

"This, combined with producers holding onto all of their new females, means the numbers are just not there and won't be for a while."

But this season is looking a lot better to rebuild herds and producer confidence, Mr Neville says, and cattle are responding "unbelievably" to the rain.

Undoolya Station's Ben Hayes runs about 2000 Poll Hereford females just out of Alice Springs and said sourcing bulls this year was a bit of a challenge.

"The season broke a bit later for us so we started looking for bulls in January," he said. "Our agent sourced more bulls from NSW than usual, there seems to be a lack around."

"There was a lack of numbers this year because a lot of studs had already sold lines," he said. "But some studs sold privately before the sale was meant to be held, so we picked up a couple of extra bulls."

After destocking throughout the past couple of years from about 5000 breeders down to 2000, the road to rebuilding stock numbers has begun for the Alice Springs station.

"Calves have begun dropping and it has been a good season. But that means the cattle we would ordinarily sell will be retained as breeders," Mr Hayes said.

Prostock Central Alice Springs agent Alec Rainnie said cattle turn-off was quite low across the Territory, compared with past seasons.

"Some parts of the Territory have not kicked in with selling yet though," he said.

"The south of Alice had really late rain, so they waited to join and selling is now at least a few months behind."

But despite the lack of numbers being offered so far, Mr Rainnie said many producers would begin to sell in the coming weeks.

"But there are not a lot of calves on the ground. Females did not have the condition at joining," he said.

"But since the rain, cows were getting in-calf but now won't drop until the end of the year."

Another issue for Territorians is actually accessing cattle that are suitable for market, further impacting numbers at saleyards.

"Producers set water traps to collect cattle but since the rain, there is a lot of water everywhere, so two things are happening - cattle are not attracted to water points and water is also blocking mustering a bit too," he said.

Mr Rainnie said the cost to move cattle via helicopter was feasible with herds at full capacity, but not when breeder numbers were at the present low levels.

Despite NT stations not requiring as many bulls in the past few years, Days Whiteface stud at Bordertown has sold into the Territory for 40 years and inquiry has increased this year.

Stud principal Lachy Day sent a few bulls to the NT in early July, a week prior to the Alice Springs Show bull sale.

But the event was cancelled through a lack of numbers being offered.

"It was not ideal that it was cancelled but the numbers were just not there. I think people got a bit nervous with travelling during potential COVID restrictions too," he said. "We were lucky though, we had clients still purchase the bulls we sent up there because they really needed them this year."