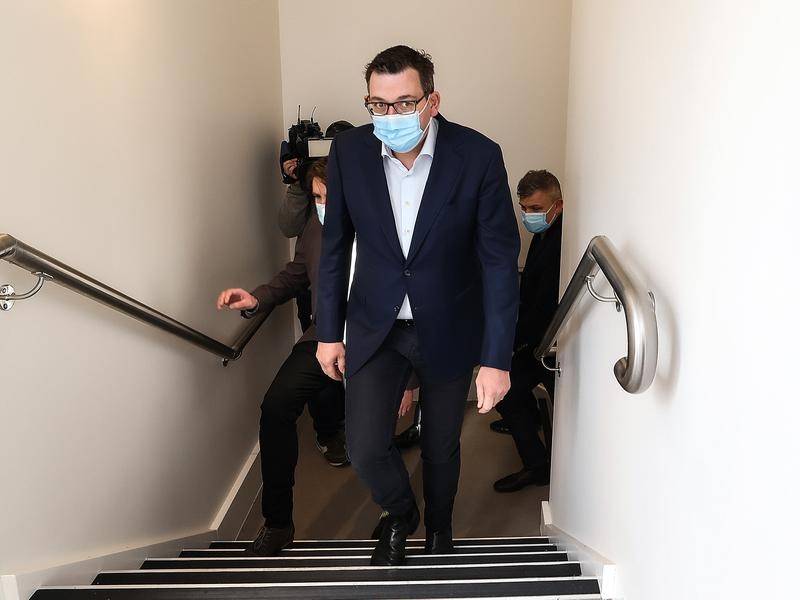 Premier Daniel Andrews is expected to announce another snap lockdown for Melbourne from midnight.

Melbourne is expected to enter a snap lockdown from midnight in an effort to contain the growing outbreak of the COVID-19 Delta variant in the state.

Melbourne is expected to enter a snap lockdown from midnight in an effort to contain the growing outbreak of the COVID-19 Delta variant in the state.

AAP understands Victorian ministers and public health officials are holding meetings on Thursday to discuss how long the lockdown will last.

An announcement is expected to be made by Premier Daniel Andrews on Thursday afternoon.

It will be the fifth lockdown for Victoria since the start of the pandemic and the third in 2021.

It comes after Victoria recorded two new COVID-19 cases - an adult and a child who attended an AFL match between Carlton and Geelong at the MCG on Saturday.

The two cases are in addition to 10 locally acquired infections recorded in the 24 hours to Thursday morning, all of which were previously reported.

COVID-19 Commander Jeroen Weimar said the cases appear to be linked to an infectious Maribyrnong man who attended the match and was seated the MCC member's reserve on level 2.

But he said the duo were not known contacts of the infected man and it appeared to be a case of "stranger-to-stranger transmission".

"They were sitting in very different parts of the ground. There's no obvious relationship between them. The interviews and discussions are ongoing," Mr Weimar told reporters.

The infected man, aged in his 60s, attended the game with his friend, a teacher from Bacchus Marsh Grammar school who lives in Barwon Heads.

The teacher and two of his family members, a nine-year-old child and a man in his 60s, have also subsequently tested positive for COVID-19.

Both Bacchus Marsh Grammar and Barwon Heads Primary School have been closed and more than 3500 students and staff are self-isolating.

The child who tested positive on Thursday is understood to have attended St Patrick's Primary School in Murrumbeena, which has also closed.

The Maribyrnong man lives at the Ariele Apartments complex, where removalists from NSW, who have since tested positive to COVID-19, were working on July 8.

Another chain of community transmission occurred at Craigieburn Coles on Saturday, when a man contracted the virus after speaking to a member of a family that had recently returned from NSW.

The family of four have all progressively tested positive since Sunday. They live in the local government area of Hume and were granted a red zone permit to return from NSW.

Mr Weimar said there were 16 active COVID-19 cases connected to the two chains of transmission and more than 75 exposure sites.

Some 1500 primary close contacts and 5000 secondary contacts are self-isolating.

Meanwhile, it was announced late on Wednesday that anyone aged over 12 will be required to wear a mask in all indoor settings, unless an exception applies.

Victorian locations where there is a risk you may have been exposed to COVID-19: https://www.coronavirus.vic.gov.au/exposure-sites