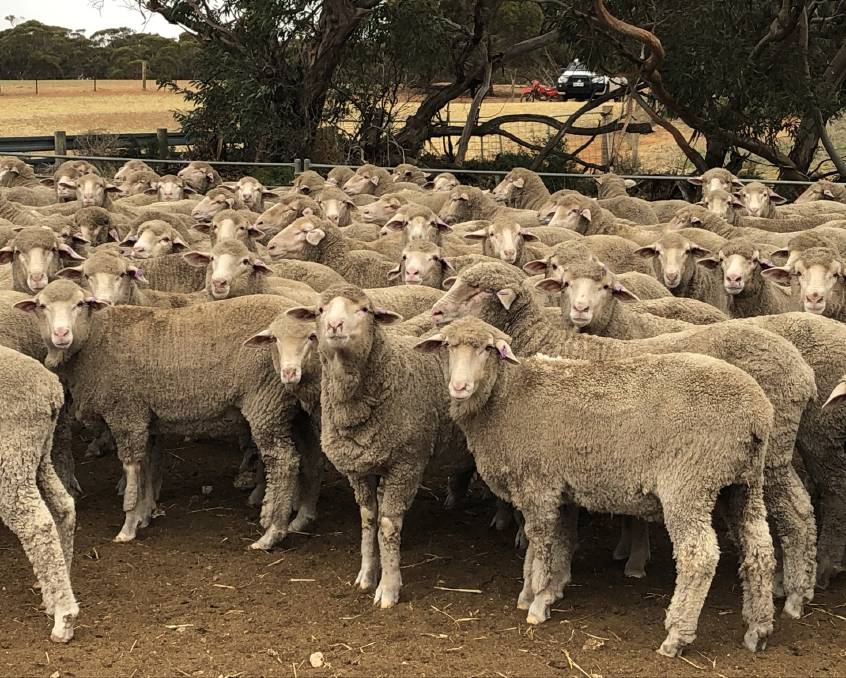 WELL-NOURISHED WOOL: Kamora Netley Park's goal is to produce Poll Merinos which can thrive in any environment.

"Lambs on the ground, wool thumping the table and meat in the cool room - that's why we keep coming back to Kamora Netley Park," says Ben Reichstein, Mantung, South Australia.

"There is never a bad ram in the sale which enables us to buy with confidence plus the after-sales service from Kamora Netley Park is fantastic.

"Reggie (Kamora Netley Park stud principal Justin Boughen) classes our ewes every year, and each year we are seeing improvements in the quality of the rams and our flock."

Mr Rechstein finishes his wether lambs to heavy weights after shearing in March, with the lead drafts out of the feedlot usually dressing around 36kg.

Over the past 50 years the team at Kamora Netley Park has developed Poll Merinos that are big boned, with excellent square structure, good pasterns and lovely loose soft skin carrying white, stylish wools.

The strict classing requirements ensures that all their sheep have white crimpy wools with lock, which is something the stud has worked hard at.

Our staple length averages 110 millimetres, yielding around 65.7 per cent, with an average fleece weight of 8.5kg. Kamora Netley Park began breeding dual-purpose Poll Merinos in 1963 and meat and wool were just as important back then as they are today. - Justin Boughen, Kamora Netley Park Merinos

Wools with good lock keep out the elements, which is particularly important for yield, Justin Boughen said.

"We believe that yield and staple length with lock gives us weight," Mr Boughen said.

"Our staple length averages 110 millimetres, yielding around 65.7 per cent, with an average fleece weight of 8.5kg.

"Kamora Netley Park began breeding dual-purpose Poll Merinos in 1963 and meat and wool were just as important back then as they are today."

The stud's goal is to produce Poll Merinos which can thrive in any environment, with bright white, well-nourished wools.

"We breed these sheep to make a profit ourselves knowing that the people who buy them will to. We are proud that our breeding can cope with any environment, from drought country to high rainfall regions, the south east of South Australia through to Victoria, and all parts of NSW." 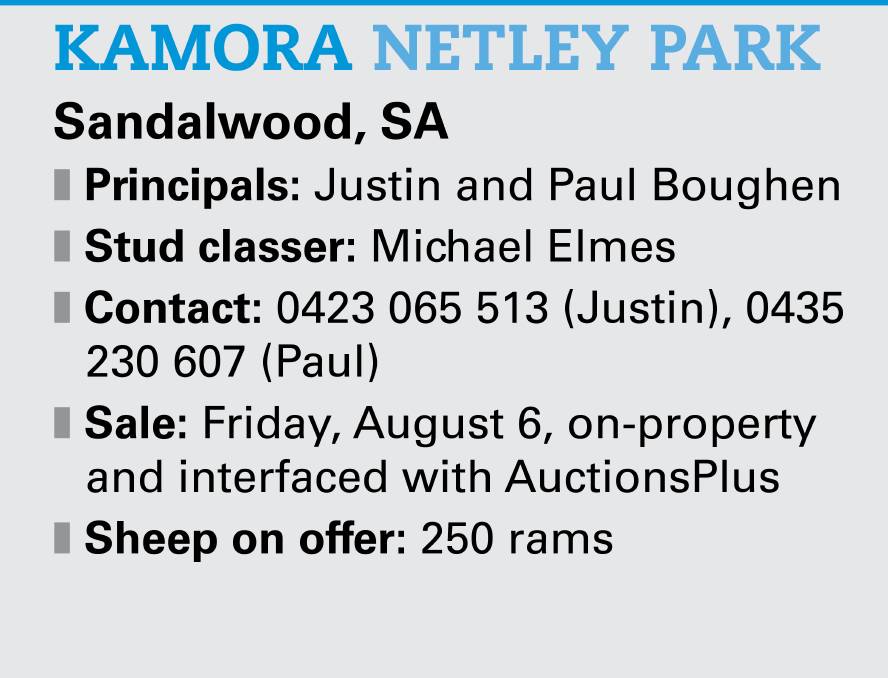 Kamora Netley Park is based near Sandalwood, SA, in the heart of the SA Murray Mallee.

"We are in sandy loam, red flat country with 12 inches on average rainfall a year," Mr Boughen said.

"Our sheep know how to survive on not much out here in the Mallee.

"We also AI (artificially inseminate) 100 to 150 ewes each year, but we believe in keeping our best young sires for natural mating which gives us breeding predictability," Mr Boughen said.

"We single mate as many rams as possible having between 20 and 25 mobs at lambing, so we know how each sire is performing."

Kamora Netley Park sells about 400 rams each year through its on-property auction and private sales.

Its August 6 sale, which will be interfaced with AuctionsPlus, features 250 rams.