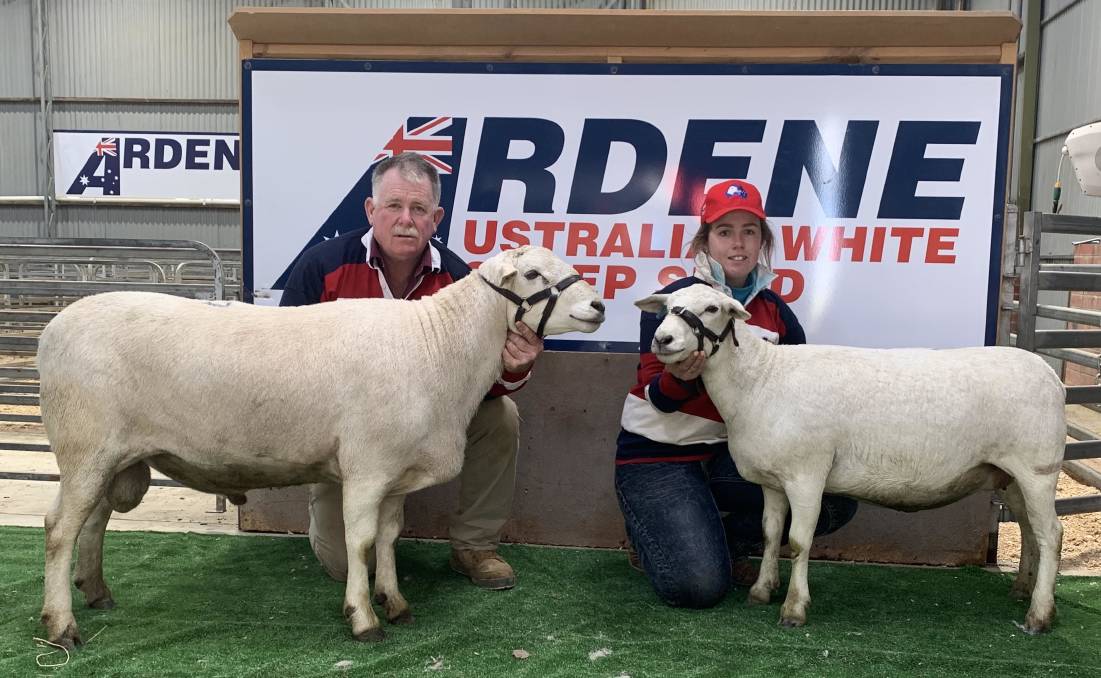 IMPRESSIVE GENETICS: Bruce and Ali Hodgson with Magnum and Martina which are having a big impact at Ardene.

The stud, based at Mount Torrens in South Australia, has 650 stud ewes, selling 150 stud and flock rams throughout the year, including at the annual on-property sale in October.

Before establishing Ardene, the Hodgsons were running a commercial prime lamb business with 1200 composite ewes joined to Poll Dorset and Texel rams.

"We were introduced to the Australian White as an easy care, fast growing, shedding meat breed that could handle our high rainfall, as well as proving a solution to the negative return and labour required to shear our composite ewes," Mr Hodgson said.

"We initially tried some Aussie White rams over our composite ewes and were very pleased with the fast, even growth of the lambs, who were able to be sold as suckers at 17 weeks, dressing at an average of 24 kilograms. There was no need to wean and feed to get to a saleable weight."

The Hodgsons were able to see the potential impact with the breed in the prime lamb industry, and they started the stud in 2012.

"The excellent first-time result gave us an incentive to start our own stud, and supply rams to prime lamb producers through out Australia and internationally," Mrs Hodgson said.

"Once starting the stud we found we could run 30 per cent more Aussie White sheep per hectare than the composite ewes we had been running. This was due to the more efficient conversion of pastures as they weren't growing a fleece - the nutrition was all going into the carcase."

Since the establishment of the stud, they've aimed to improve the structural correctness and carcase shape of the flock, along with increasing fertility.

"We have lifted our lambing percentages from 120pc to 165pc," Mr Hodgson said.

"This has been achieved by extensive embryo transfer programs over the last eight years, as well as purchasing the right genetics to complement and improve our flock."

Among the recent genetics added to the Ardene program were the record-setting Tattykeel Magnum and Tattykeel Martina, purchased last year for $53,000 and $13,000 respectively. Magnum has been used in three embryo transfer programs and three natural joinings, and his first drop of lambs have grown out well, with some being shown at this year's Australian Sheep & Wool Show at Bendigo, as well as Royal Adelaide Show.

Martina was purchased in lamb, producing twins, and has since been flushed in a ET program, joined to Magnum. She's currently in lamb again to Magnum, through a natural joining.

Once starting the stud we found we could run 30 per cent more Aussie White sheep per hectare than the composite ewes we had been running. This was due to the more efficient conversion of pastures as they weren't growing a fleece - the nutrition was all going into the carcase. - Jannie Hodgson, Ardene Aussie Whites

"We liked their general type, which complements our breeding objectives - both of them have all the positive attributes that the breed is known for," Mr Hodgson said.

"We are hoping that Magnum's influence in our stud will be as good, if not better than 150140 we purchased for $20,000 in 2016, from the same stud, while complementing our own line of home-bred stud sires.

"We will have more than 300 progeny born this year from Magnum from our best ewes. This will allow us to select the best of the best for our future dams and sires in our stud moving forward, thus continually providing the highest quality stock to our clients."

Ardene has clients in all states except the Northern Territory and Queensland, and their genetics have been used as the foundation for studs, as well as many commercial operations.

"We have had a number of clients, who have switched over from running cattle to running commercial Aussie White flocks, with minimal output," Mrs Hodgson said.

"Minor alterations to cattle facilities is all that's been required, because there's no need for shearing infrastructure."

On offer in this year's sale are 10 stud rams, 90 flock rams and 50 stud ewes. All flock rams will be sold with the certified AWSBA ear tag, recognising the stud's registration with the association.

Thirty ewes will be sold scanned-in-lamb to Magnum or with Magnum lambs at foot, and another 20 stud ewes are available. 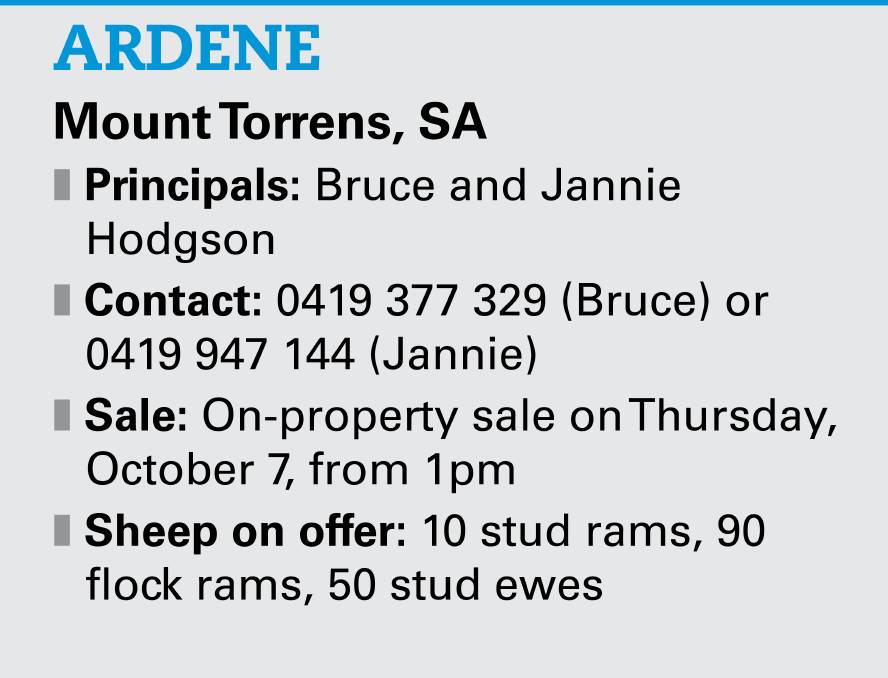