Bruce and Jannie Hodgson have passed in cropping to focus solely on their stud. 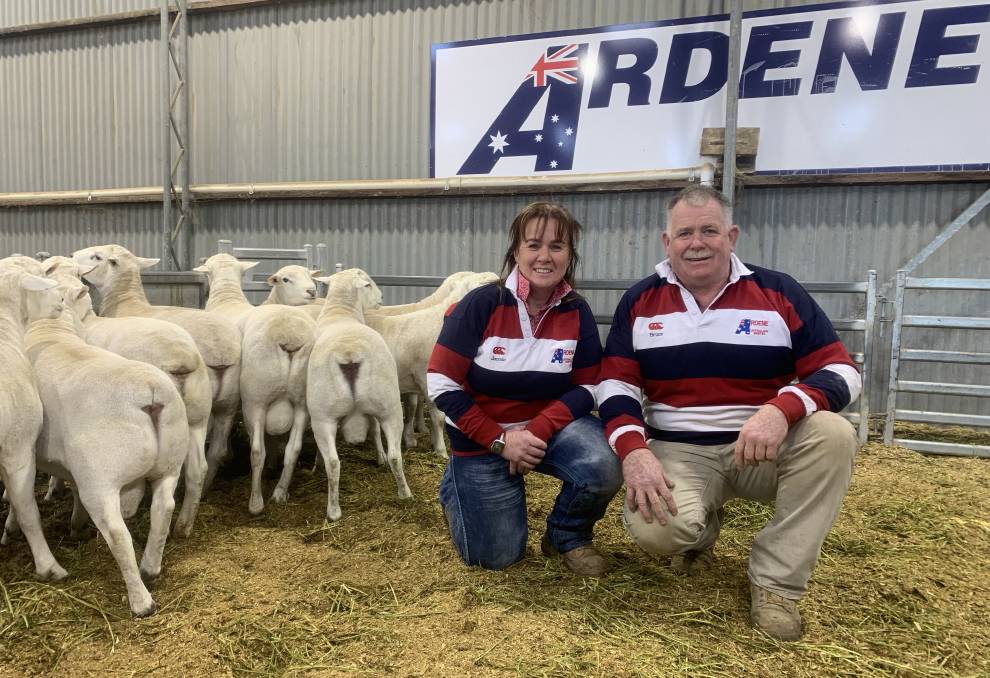 TheArdene Australian White stud principals from Mount Torrens, SA, run about 650 stud ewes and sell up to 150 rams to the commercial and stud sectors each spring.

The former Victorian breeders paid a whopping $53,000 for a Tattykeel ram in September 2020, along with three ewes including a new world record price of $13,000 for an Australian White.

Mr Hodgson said he was keen to increase the qualities of his progeny on his 243-hectare property in the Adelaide Hills.

He and his wife have been shortlisted for the Zoetis Trade Champion award.

"Our objective is to produce fast-growing, high-yielding carcase animals and we're focused on the structure of our animals and the carcase shape," he said.

"We're producing an animal that will handle any of Australia's country, whether it's on pastoral or improved country."

The Hodgsons started breeding sheep in 1992 when they bought their first property at Darlington, Vic, where they remained running the stud and cropping operation until 2018 when they relocated to SA.

Mr Hodgson said the move allowed him to focus more on the stud, which was established in 2012, forgoing the cropping enterprise.

"There is no major difference between Victoria and SA, it's a different climate for sure, but we're in a high rainfall area of about 650 millimetres so the sheep still do extremely well," he said.

"The majority of our rams are sold to commercial clients who are spread out across Australia in every state and territory except the NT and Queensland."

Lamb off their property is sold to a handful of butchers in the Adelaide Hills, and also sold direct to consumers and a few other hospitality businesses in the region.

"It's been very successful and demand is only increasing," Mr Hodgson said.

"We're struggling to meet supply at the moment and we're working with a few clients, other breeders who have bought our genetics, to source lamb from them."

Before Australian Whites, the couple ran composite ewes in Victoria.

When they switched breed, they found out they could run 30 per cent more Australian Whites per hectare compared to their composite predecessors.

"The main reason I put it down to is that the Australian White is not growing a fleece so there is less energy requirement for the ewe, compared to the intake of a composite ewe," Mr Hodgson said.

"Even though we were sitting on 175-180pc lambing for our composite ewes, now with the Australian Whites we're at 160pc but we're running 30pc more lambs per hectare so we're turning off more lambs than we did before."

He said flock numbers would likely remain where they were for the foreseeable future, however, with four days of embryo transfers this year along with natural joining and artificial insemination, there was scope to increase numbers to meet demand.