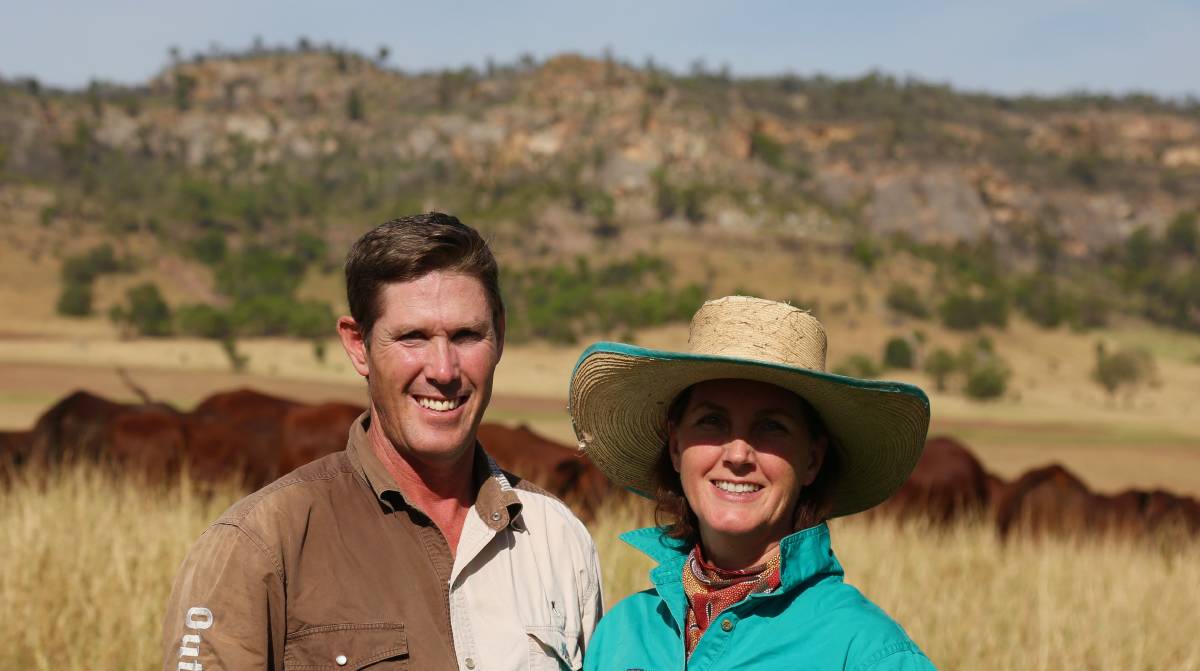 LONG HISTORY: Gyranda Santa Gertrudis Stud near Cracow, was established in 1952 and is now under the third generation of management with Peter and Nikki Mahony.

Gyranda Santa Gertrudis Stud has developed a reputation for maintaining growth and fertility in the most trying conditions, but it is their focus on carcase, and combining meat quality with efficiency that looks set to have a marked impact on northern beef production.

Gyranda Pastoral Company is owned by Peter and Nikki Mahony.

It is stud number three and one of the two oldest Santa Gertrudis studs in Australia, established in 1952 and now under the third generation of management.

The Mahonys operate 15,000 hectares near Cracow in Central Queensland with a herd of 3500 head of cattle.

They join 800 stud and 250 commercial cows and sell more than 200 bulls annually. Their steers and heifers are largely turned off as heavy feeders, but 100-plus steers are annually finished on grass or ownership retained in feedlots. These are placed into the EU or Jap Ox markets.

Gyranda is a mix of brigalow, scrub and forest with native and buffel grasses and legumes. Additionally, they have 32 kilometres of Dawson River frontage and 360ha of irrigation.

"We are enjoying a reasonable season with a good reserve of summer feed and recent rain providing useful grass and legume growth," Mr Mahony said.

The females are joined for a 10-week to three-month period, depending on the season, and they cull for fertility.

"Heifers are joined as yearlings and the average Gyranda cow is in the top 25 per cent of the breed for Days to Calving - Fertility EBVs. Our average fertility rate for mature cows is 88 to 92pc," Mr Mahony said.

As well as the breeding operation, the Mahonys trade a number of cattle, predominately young stock of flat back types.

"This year we have bought in Santas, Angus, Droughtmasters and some Charbrays. In these trading cattle, temperament, growth and carcase quality are our primary concerns and in our environment Santas usually perform exceptionally well," Mr Mahony said.

We have seen a marked improvement of MSA grades in Gyranda cattle - grades that do not negatively affect yield and deliver a higher return per carcase. - Peter Mahony, Gyranda Santas

From a breeding perspective, fertility and growth have always been the primary drivers of profitability to their clients and hence selection in their herd. However, over the past decade, an increasing emphasis has been placed on carcase quality in the Gyranda cattle.

"With a strong Shorthorn influence, carcase quality in Santa Gertrudis has always been a strength but can conflict with the need for constitution and toughness to thrive in the challenging heat, flies and ticks of northern Australia," Mr Mahony said.

"A higher IMF has traditionally acted counter to higher growth and feed efficiency (for which in northern Australia fertility may be used as something of a proxy).

"The utilisation of data- both EBVs and careful analysis of kill sheet feedback - has allowed for the selection of those animals that grow well and regularly raise a calf in variable conditions, but also maintain carcase quality - that is sufficient fat, excellent muscle and increasingly high IMF to lift the MSA grades.

"We have seen a marked improvement of MSA grades in Gyranda cattle - grades that do not negatively affect yield and deliver a higher return per carcase."

This combination of MSA grades and yield have seen Gyranda cattle take out champion steer carcase at Calide Dawson Carcase competition in 2020, following champion heifer in 2019. Gyranda has also performed consistently well in weight gain competitions such as the RNA Paddock to Palate.

"The beef market is becoming increasingly segmented and Wagyu of Wagyu F1s have their own complete production system to deliver a premium product with marbling scores from three to 10," Mr Mahony said.

"Most beef - and most beef production systems - do not, however, target marbling scores in excess of two and, in fact, many premium brands with four or five star MSA will not exceed a marbling score of two.

"It is my belief that in tropically adapted breeds few, if any, can surpass the consistent carcase quality of Santa cattle; that in the variable conditions of north Australia where Santas thrive they can package the marbling with both the growth and yield to deliver a more profitable carcase out of both a grass- and grain-finished system.

"By utilising data and the best available genetics from around the world we are honing a product which will consistently be considered at the premium end - without compromising those core tenants of growth and fertility."