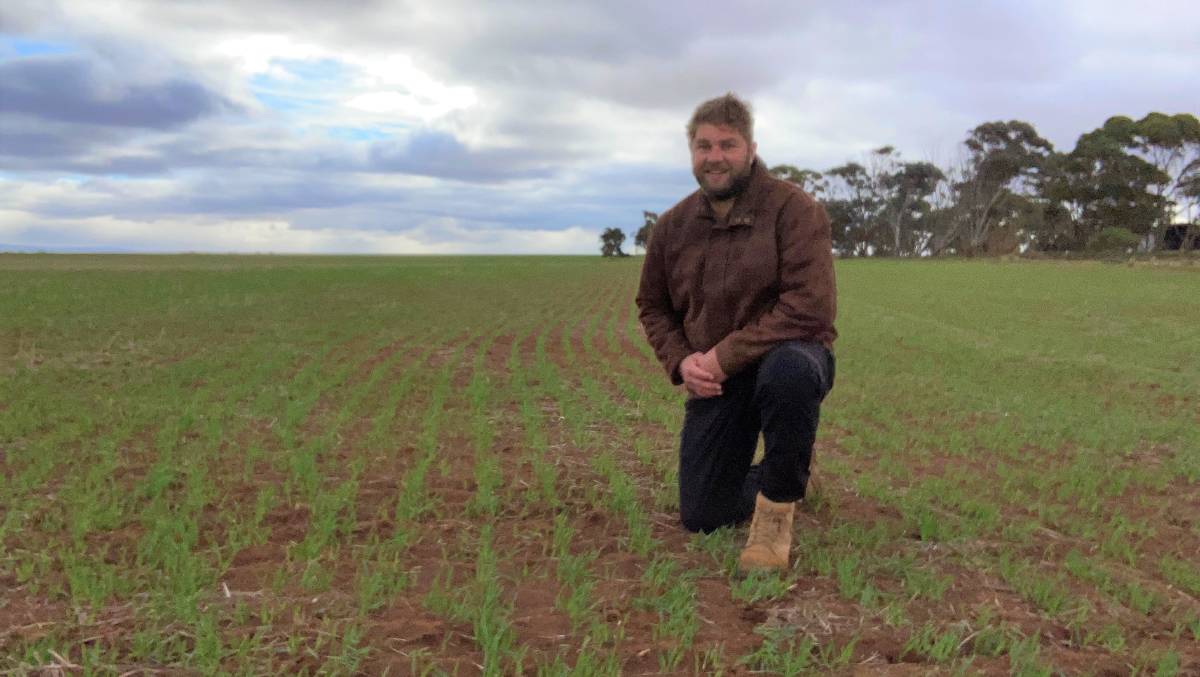 BARLEY AWAY: Condowie mixed farmer Ashley Hentschke in a barley crop that was sown on May 19. Mr Hentschke dry-sowed the majority of his cropping program.

CROP and pasture growth came to a halt earlier this month, after a late start to the season and low temperatures put pressure on crop emergence.

CROP and pasture growth came to a halt earlier this month, after a late start to the season and low temperatures put pressure on crop emergence.

But with the recent arrival of rain across the state, many crops are getting back on track.

Although most croppers decided to risk it and dry sow, some SA Mallee growers did wait for rain and only began seeding about two weeks ago.

Loxton-based independent consultant Chis McDonough said the northern Mallee received the highest falls in the past two weeks that helped to "spark germination".

"There has been a lot of dry seeding going on up until the other week - so the latest 8 millimetres will behave more like 15mm in the furrow.

"Some growers have probably cut down their sowing programs, but will still try and get a fair bit in now that the rain has come."

Damaging winds across the majority of SA also affected crops in the Mallee, causing soil drift and seed displacement.

With just a few millimetres of rain falling in March and April, the last solid rainfall in the northern Mallee was in November last year, so Mr McDonough said growers were certainly looking for a solid spring finish to get crops over the line.

In the Mid North, Ashley Hentschke sowed most of his crops dry at Condowie, and until recently, the early-sown crops were "struggling ahead of the rain".

"I finished in the first few days of June and hopefully from here on in, we will get solid rainfall," he said.

"It has been a very tough start, but we have had about 9mm across the farm so far this week."

Mr Hentschke said despite having increased confidence for the season ahead since crops began to emerge, his main concern was still pasture growth.

"We are feeding lambs because of slow emergence and growth - there is not be the bulk of feed we need," he said.

"Pastures would be three to four weeks behind last year, so the main focus at the moment is keeping the sheep happy until pastures grow."

Seeding has been a "long journey" on the Yorke Peninsula, according to AW Vater & Co agronomist Zack Zweck, Kadina.

"Most croppers received about 15-30mm in the past week or so and the majority are finished their programs now," he said.

But Mr Zweck said pasture growth was incredibly slow, causing limited feed, and despite early-sown crops being on track, the majority were only at one or two leaf stage, which is about a month behind compared to 2020.

Germination is slightly uneven, Mr Zweck said, but about 50 per cent of crops in the area have poked through.

"Dry-sown crops that were out of the ground have been chopped off a bit and some crops are yellow after being covered over by soil," he said.

"The area got about 25-40mm this week, which has helped after such a delay to the season. But it is crucial there is some follow up rain."

"Some re-sowing will need to happen so hopefully the weather is kind in the weeks ahead," he said.

Herbicide damage has also been recorded in some parts of the Lower North, after dry soil profiles were compounded by a late start.

"There is some crop damage from water-soluble herbicides particularly," Mr Davis said.

It came after "horrendous" winds lashed paddocks in the days before, but thankfully, minimal damage was caused.

Early-sown canola crops across the EP were patchy because of low rainfall, but plant numbers had improved since rain arrived in the past few weeks.

There have been some rotation changes, including larger areas sown to canola and barley, so rain frequency is increasingly important after the late, dry start.

"It has been a slow, tough start, but we had significant rainfall on Tuesday night, with most areas getting about 22mm," he said.

"Early crops are about 3-4 leaf stage. But beans have taken more than a month to emerge, which is a sign of the limited rainfall."

Pasture sowing is also in full swing across the SE, but most were lucky to avoid soil drift or seed displacement during the windy weather last week.