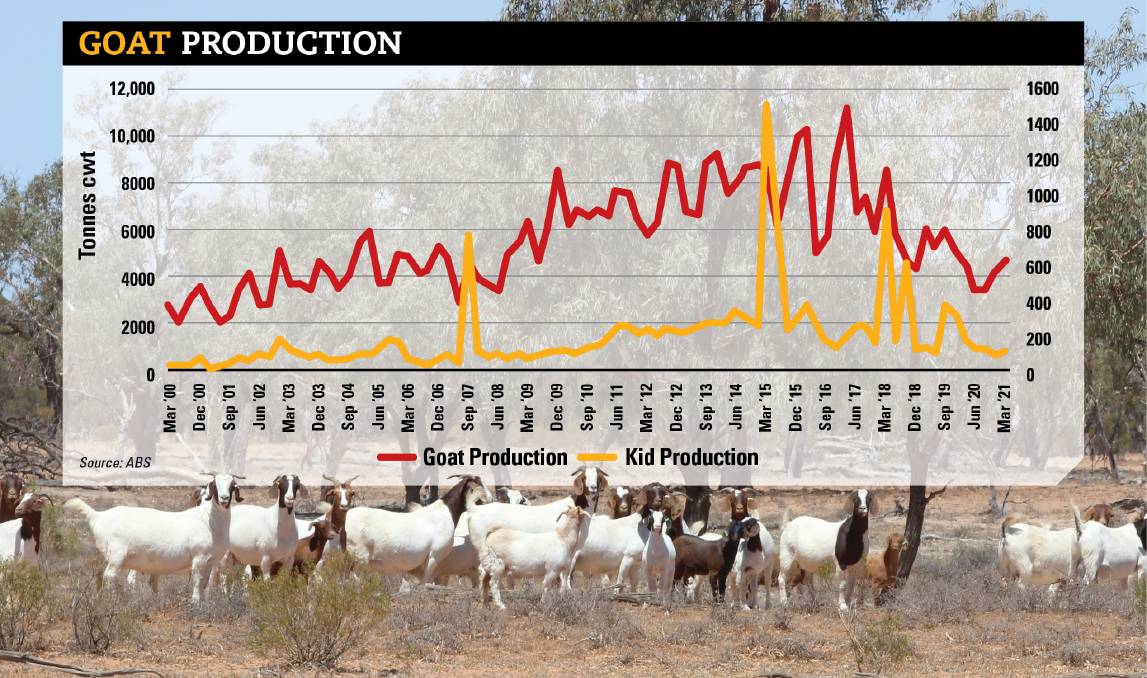 Australia's goatmeat production has plummeted as the national herd rebuilds following years of drought but industry experts say they expect to see the trend reverse in the coming year.

Australia's goatmeat production has plummeted as the national herd rebuilds following years of drought but industry experts say they expect to see the trend reverse in the coming year.

According to recent ABS data published by Meat & Livestock Australia, there has been a declining level of goatmeat production since 2016.

The data places goatmeat production at 4,632 tonnes cwt for the March quarter, a 5 per cent lift from the 2020 March quarter, but 37pc below the 10-year quarter average.

The largest declines have been in NSW and Western Australia, with only 96 and 2 tonnes produced by each state respectively, while Victoria has experienced a modest lift in production.

Goat Industry Council of Australia president John Falkenhagen said the figures were reflective of the rebuild phase currently being experienced across livestock industries, with the goat sector no exception.

"You can see that from the sales from property to property," he said.

"People are retaining stock and building up herd numbers so hopefully in the next 12 to 18 months we'll see those numbers start to climb and stabilise into the future."

"There's a lot of interest, a lot of people coming into the game so they've got to start selling them at some point," he said.

"I think we've got a bit of a double whammy where we're building herd numbers up but we've also got newcomers as well who are taking does and retaining them."

Mr Falkenhagen said the state trends point towards the role that rangeland goats play within the overall industry.

"Rangeland make up 88pc of the total goatmeat market and the back of NSW is one of the places that got hardest hit with the drought and the rangeland isn't a managed system, it's moving that way and maturing into it which hopefully will stabilise as well," he said.

"Victoria is all farm, NSW is all rangeland and that's been our heartland for a number of years and Queensland is where there's big growth happening, where people are retaining or buying stock to grow their herd.

"I think Queensland is going to be fairly strong going into the future."

The drop in production also highlights that a decrease in rangeland goat harvesting as compared to during the drought, with it expected populations will build up again.

Australia only caters for about 1pc of the global goat production, with limited domestic demand.

At present, the US is acquiring 55pc of goatmeat exports, with the rest bound for Asia and the Caribbean.