DAIRYFARMERS are able to have more confidence for the year ahead, as processors come out strong with opening prices for the 2021-22 season.

LOOKING AHEAD: Lyndon Cleggett, Glencoe, who milks about 350 Guernsey cows, says there has been some positive signs in the sector.

DAIRYFARMERS are able to have more confidence for the year ahead, as processors come out strong with opening prices for the 2021-22 season.

With more competition for milk, processors have come out with prices said to be at near-record levels, while the new requirement for mandatory contracts has led to something of a bidding war.

"The opening prices for the new season have set farmers mind at ease that things are looking good for another year," he said.

"(Prices) are where we expected them to be and it also shows (processors) are abiding by the code of conduct in getting prices out there."

A number of companies have already revised and increased their averaged weighted price ahead of opening, in order to maintain a "competitive" price.

Saputo Dairy Australia, Bega Cheese and Fonterra have each revised their prices upwards, just days after announcing their initial price earlier this month.

After initially offering an opening weighted average milk price for the southern region of $6.55 a kilogram milk solids on June 1, Saputo increased its offering to $6.85/kgMS, saying it was "committed to paying our suppliers competitive milk prices".

It means milk is being treated as having different standards of quality, which is helping us get over that $1 a litre period - an attitude that smashed the industry. - LYNDON CLEGGETT

Mr Hunt said dairyfarmers should still take the time to explore the contracts and see what options suited their farms.

But he said there were other good signs with a relatively "kind" season, and feed prices down on the highs of the past few years.

He said other reasons for optimism were the new free trade agreement with the United Kingdom and the next step of the Australian Dairy Plan, which is expected to be "on the table" within the next month, with a goal to "put money in farmer's pockets".

The latest global quarterly dairy report from Rabobank is also showing good prices on the global and farmgate level.

He said Rabobank had also revised its prices and was forecasting a full-year milk price of $6.90/kgMS in the southern export sector.

RELATED:Forum to focus on dairy beef

Opening prices increase across the board

"We have revised our forecast up from $6.50/kgMS, as market conditions support the recent milk price announcements based on our models, and a number of dairy companies announcing second and third step-ups prior to the season getting underway on July 1," he said.

"That said, our modelling suggests there is limited price upside as the season progresses, unless the global market and the Australian dollar outperform our expectations."

Despite the positivity, the report does warn that "global markets are delicately poised", with an international year-on-year growth of just 1 per cent predicted in the next 12 months. 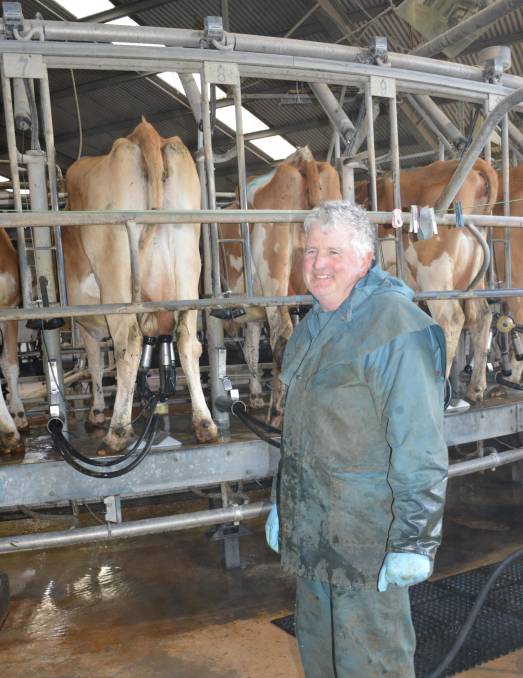 LOOKING AHEAD: Lyndon Cleggett, Glencoe, who milks about 350 Guernsey cows, says there has been some positive signs in the sector.

SOUTH East dairyfarmer Lyndon Cleggett, Glencoe, said there were some positive shoots and signs of recovery in the dairy industry in the past few years.

He said there were indications this upcoming season could be the third consecutive year of solid performance.

While he said there was still some caution, and increasingly expensive inputs, a run of better years had relieved some pressure.

"We've spent a bit on machinery and upgrading and making sure everything is running OK," he said.

He said during the leaner years there was reluctance to spend too much money, but that had changed.

"You don't sit there worrying about it. If you have to do it, you do it now," he said.

But he said there was still some way to go.

"We need another couple of years before the industry is buoyant," he said.

Mr Cleggett was skeptical about the benefits of mandatory dairy contracts.

"If (processors) did a good job, you stayed with them, and if they did a bad job, you moved," he said.

He supplies UDC, saying their focus on cream suited his Guernsey herd.

But the increasing range of smaller and larger players in the industry was helping boost competition.

"The industry needs competition," he said.

"It's nice for farmers to know they're not going to have prices crash in the middle of the year."

He said the diversity of milk products was also a bonus, not just for prices, but for the feeling within the industry.

"It means milk is being treated as having different standards of quality, which is helping us get over that $1 a litre period - an attitude that smashed the industry," he said.

"It's probably one of the biggest things in the industry in the past few years, that change."