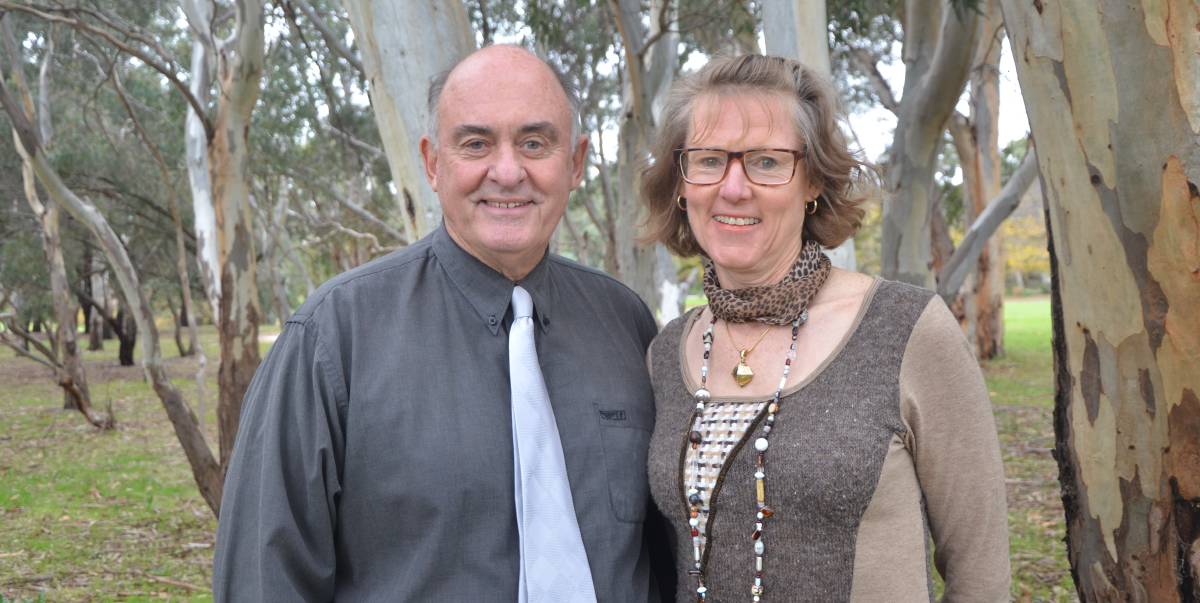 John Crosby and wife Mary Jo Fisher were chuffed to hear of his Queen's Birthday Honour.

AN agribusiness figurehead who has made a mark on a wide range of agricultural sectors, John Crosby has received a Queen's Birthday Honour for significant service to agribusiness, and to the farming sector.

AN agribusiness figurehead who has made a mark on a wide range of agricultural sectors, John Crosby has received a Queen's Birthday Honour for significant service to agribusiness and to the farming sector.

The current Peninsula Ports chair, and new Member of the Order of Australia, has been involved in farming and farm-related business all of his life, growing up on a farm at Kadina before moving to Moree, NSW, to develop a property with his three brothers and father.

"I was born and bred on a farm and went to Roseworthy College so it was ingrained in me from an early age to be involved in agriculture in some way, shape or form," Mr Crosby said.

"I spent the early years on the farm, but became very interested in the downstream area from the farm - the agribusiness sector.

"I could see that, from the point of view of agriculture generally, the connection into the marketplace was an area that was very expensive and had a big impact on the net farm income."

Agribusiness and advocacy for the sector have been where Mr Crosby has made his mark.

Over a long career, he estimates he has been a member of 100 different agricultural organisations and chaired about 50 of those.

His introduction to that side of agriculture came in the late 1980s when he joined a local branch of NSW Farmers.

Mr Crosby went on to become senior vice president of both NSW Farmers and the National Farmers Federation from 1992 to 1994.

He moved back to SA to take up the director's position with Elders and served in that role from 1993-99, while also finding the time to run an irrigated and dryland cropping and cattle enterprise at Lucindale.

Among a litany of other roles, he served as president of the Agribusiness Association of Australia on two separate occasions (1996-97 and 2004-08) - and was named a life member in 2019 - was chairman of the SA Committee during the implementation of the National Livestock Identification System from 2004-07 and was chairman of the Quarantine and Export Advisory Council for the Department of Agriculture from 2007-10.

Mr Crosby's impact has been felt across a number of sectors, chairing the SA Government Beef Industry Development Board from 2005-08, chairing the Wheat Industry Expert Group in 2008 and working as the general manager of the Dairy Authority of South Australia from 2012-16.

His previous awards and recognition include a Distinguished Alumni Award from the University of Adelaide in 2017 and an Award of Merit from the Roseworthy Old Collegians Association in 2018.

While he has an extensive list of roles, achievements and awards, Mr Crosby said there were two career achievements which he was especially proud of.

One, when he was part of the NFF, was being an integral player in convincing the Reserve Bank that very high interest rates seen during the '80s and '90s were counter-productive to long-term industries like agriculture.

"We formed a coalition and we continually condemned the Reserve Bank and the Government on their policies in that area and managed to get them to change them and start the period of lowering interest rates," Mr Crosby said.

Mr Crosby, also while at the NFF, was a key player in the floating of Elders, which was part of Fosters at the time.

He hopes his third major achievement will be the building of the multi-commodity Peninsula Ports port on the Eyre Peninsula.

While he tries to take on less of a workload these days, Mr Crosby still serves as chair of Peninsula Ports, chairs the Agribusiness Advisory Board at the University of Adelaide and is a patron of its Agricultural Education Fund.

He says his ongoing involvement in the University of Adelaide adopting such a major focus on agriculture, food, wine and agribusiness is something that gives him immense satisfaction.