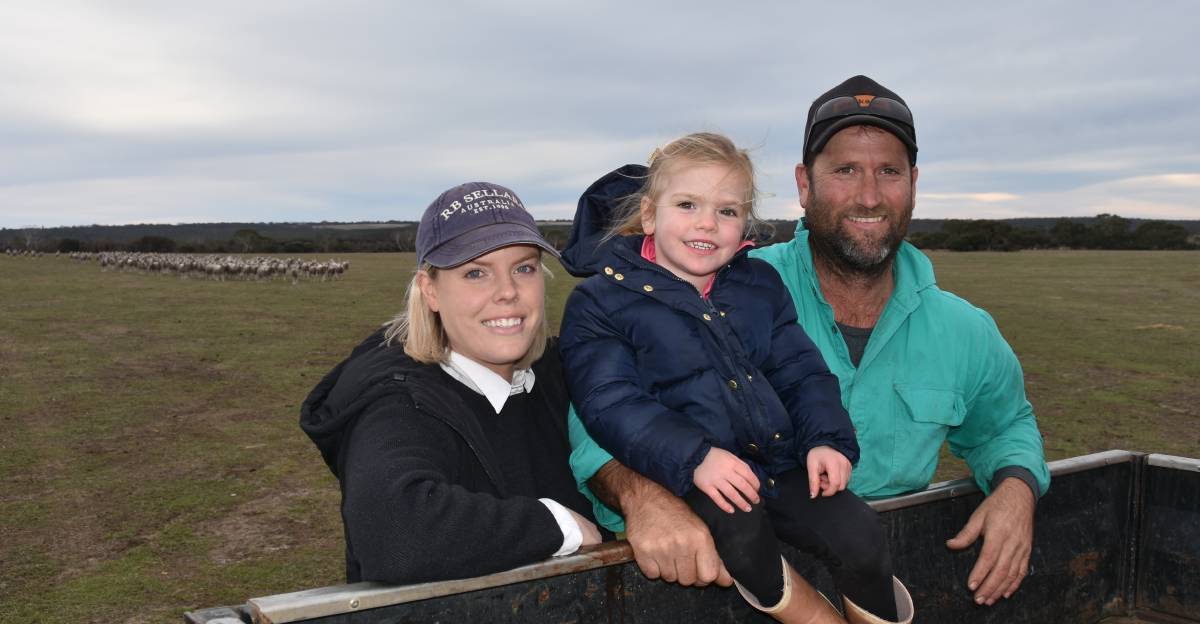 Stephanie and Tom Wurst, with daughter Charlotte, have maintained a positive outlook ever since the 2019/20 Kangaroo Island fires.

KI graziers Tom and Stephanie Wurst are firmly focused on what they believe will be a bright farming future.

AFTER losing their house, sheds, half of their livestock and seeing 90 per cent of their farm ravaged by the Kangaroo Island fires 18 months ago, Stokes Bay graziers Tom and Stephanie Wurst and their three young children could be forgiven for lamenting their circumstances, but the positive family are firmly focused on what they believe will be a bright farming future.

While much of their day-to-day farm work revolves around rebuilding - establishing shelter belts, rebuilding their flock and fencing - Tom says he doesn't think about the events of December 2019 and January 2020 very often.

"The past 18 months have been hard, but we've just had to put our heads down and get into it - it's been very busy," he said.

"It's just part of life. I don't think about the event a lot. This is life and this is what we're doing now."

"I probably see it differently to Tom," says Stephanie.

"You're not reliving it, but it is there in everything we do. There's the reminder in the dead trees, you're chasing your tail as far as workload goes and everything's about planning, recovery and rebuild."

The Wurst's ordeal began on December 20, 2019, when lightning strikes started the Duncan fire, with a strike on their property burning through 60 hectares.

On January 3, the Ravine fire swept through.

In total, 90pc of the Wurst's 750ha farm was burnt, their house was incinerated, all of their infrastructure lost and 1100 Merinos and 50 cattle succumbed to fire.

With an attitude typical of the resilient KI community, the Wursts said they made a decision in the aftermath of the fires to focus on their business and make quick decisions to ensure its future.

"We were lucky enough to get a rental reasonably close to the farm so we were comfortable enough there and we made a conscious decision to focus on the business," Tom said.

"We had to make some quick decisions to ensure there wasn't a huge financial loss. We had to restock straight away to get that cashflow going again," added Stephanie.

"We've tried to look at what happened with the fire as a challenge and an opportunity. We've tried to be really positive over the past year and a half and that's helped us manage the workload because it has been such a big process to undertake.

"With three young children, trying to balance family time, the farm and rebuilding has been challenging."

The Wursts bought in replacement sheep from WA, NSW and Vic, set about replacing fences with the help of BlazeAid and centralised their new sheds and infrastructure.

An early break and a good spring following the fires was a godsend, as was the support from community, volunteers and all levels of government.

"People have been really generous, doing anything they can to help basically," Stephanie said.

The Wursts are now running 3500 breeding ewes, more than they were pre-fire, and say the financial toll on their business and family has been softened by their insurance and grants available to fire victims.

The next step in their recovery, one which the kids are very excited about, is the move from the rental back to a house on the farm.

"We're positive about the future and that's the only way you can be," Tom said.

"There's no point getting hung up on what happened.

"Farming's a long-term venture and we've got a young demographic of farmers on the Island so we're all working towards something that's going to be better in the long run."