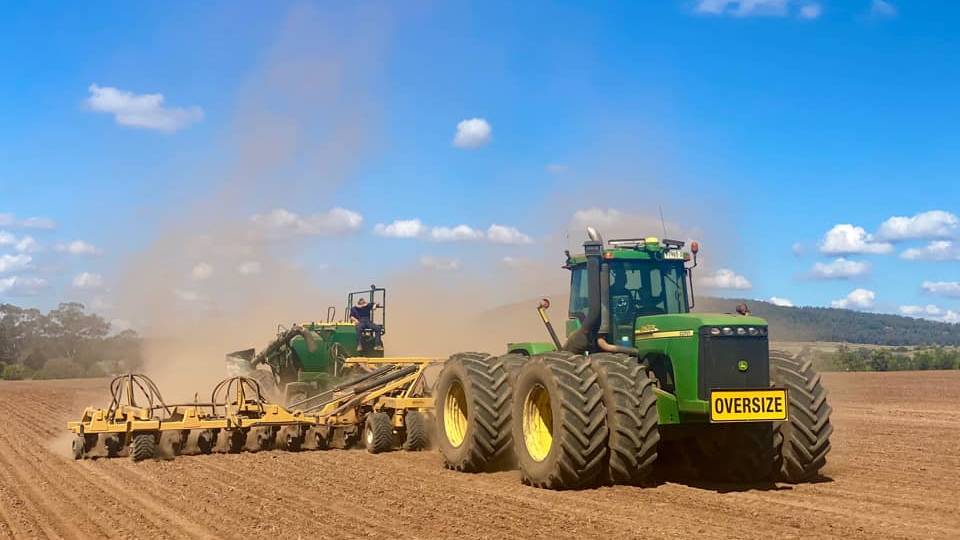 There has been a big plant in NSW this season, with this farmer at Gunnedah busily putting the crop in. Photo: Terri-Lea Hubbard.

ABARES is tipping a second consecutive boom year for Australia's winter croppers, with an estimated crop of 46.8m tonnes.

THE TYPICALLY conservative Australian Bureau of Agricultural and Resource Economics and Sciences has come out with a large number in its initial crop forecast for the year.

In its June 2021 crop report ABARES is predicting a record plant on the back of favourable climate conditions and high world prices, the main driver behind its estimate of a national winter crop of 46.8 million tonnes,

This is below last year's crop of 55.2m tonnes, the second largest on record.

However, the estimate for last year's crop in the June 2020 crop report was 44.5m tonnes.

Canola is tipped to be the star performer off the back of a whopping expected 25 per cent rise in plantings as farmers seek to cash in on the highest prices on record for the oilseed.

Acting ABARES executive director Jared Greenville said winter crop prospects are forecast to be well above average nationally, but there will be differences across growing regions.

He said while Western Australia and NSW in particular looked good at this stage of the season there were other parts of the cropping belt, such as South Australia and western Victoria that would bring average yields down if there was not a change in fortunes.

Planted area is expected to be a record 23.2m hectares, up 2pc year on year.

In terms of yield estimates Dr Greenville said NSW and WA would lead the way.

"Crop yields in New South Wales are forecast to be lower than the record highs achieved last season but well above the 10-year average to 2020-21," he said.

"In Western Australia, crop yields are forecast to be comparable to last season at around 9pc above the 10-year average to 2020-21."

"In contrast, planting conditions in most regions in South Australia and Victoria were generally unfavourable," he said.

"Most producers in these two states will be reliant on winter rainfall to finish planting, and for crops to establish and develop."

Another potential downside for yield potential is the mouse plague, although Dr Greenville expected this to impact gross margins more than production.

"Increased mice populations in the eastern states have resulted in producers undertaking more baiting than usual this season," he said. "This will increase costs of production in affected regions but farm management practices have so far minimised damage to winter crop plantings and development in affected regions.

"Some producers are likely to suffer production losses from mouse damage despite the step up in control activity, but national production levels are expected to be largely unaffected given the vast size of Australia's cropping region."

"Early indicators are that mouse numbers have peaked in most regions as cold and wet winter conditions slow breeding rates. "However, some risk remains if warmer weather in spring results in a resurgence of mice."

In terms of planted area, ABARES has the wheat crop at 13.1m ha, a 1pc year on year increase, while it tips barley will fall by 4pc to 4.2m ha.

Canola will be the big mover, with a tipped increase in plantings of 25pc on the back of the high prices and excellent conditions in WA and NSW.