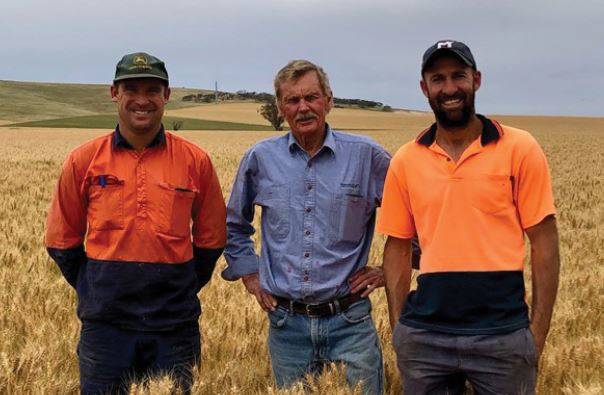 Getting crop nutrition and disease protection right early is helping a farmily family in SA get their crops up and away in good condition.

A FOCUS on protecting the crop in its vulnerable stages just after germinating is paying dividends in South Australia's Mid North.

Snowtown grain producers Simon and Nick McCormack make sure they have their seed treatments on to combat both insect and disease pressure and have said it has made a difference in getting good early vigour in crops.

This year, with a dry start, keeping plants as healthy as possible will be even more important to ensure yield is not lost come harvest time.

"We've had about 30mm in the past fortnight or so, with 20mm in one rain about a week ago, but now you would not even know it has rained," Simon said.

The farm, a fifth generation family enterprise going back to 1873 which the brothers operate in conjunction with father Paul, features a wide variety of soils from sandy loams to iron-rich heavier red soils.

It has 2100 hectares of cropping country and 500ha, primarily hillier ground, for grazing sheep, with average annual rainfall of 400mm.

The cropping paddocks are run on controlled traffic and do not have livestock on them at any stage.

"We've been no-till farming since 2001 and zero till for the past six years, with all the equipment on full controlled traffic," said Simon.

The McCormacks cropping program consists of lentils, wheat, canola and barley, with benchmark returns of 4tonnes a hectare on cereals and 2t/ha on lentils and canola.

Scepter is the primary wheat variety. Prior to seeding it is treated with the fungicide seed treatment Rancona Dimension, an ipconazole / metalaxyl based product especially effective on crown rot and rhizoctonia, which also is effective against smuts and bunts.

Simon said crown rot and rhizoctonia were two of the major disease threats in the local area.

"They have the potential to be quite nasty and it is good to give yourself some protection at sowing," he said.

He said the family would be closely monitoring crown rot this season as it often was worse after a dry summer and autumn.

"Up until this recent rain we had very little for 2021 so it will be one to keep an eye on," Simon said.

As well as the fungicide, the imidacloprid-based insecticide Guardian also went on the seed, which prevents aphid damage and associated aphid-spread viruses, along with Zincflo, a zinc supplement.

Simon said he had been satisfied with the performance of the seed treatments.

"We've seen improvements in the crop standing as well as higher yields using this seed treatment program which all leads to increased profits at the end of the day."

"If you can get that germination right that can play a big part in getting healthier plants during the season."

As well as disease, Simon said the family were keeping an eye on mice numbers.

"We're nothing like NSW but we do have more than usual and we've been out baiting, especially with a lack of other food options you don't want the mice targeting the seed you've got in the ground."

He said weed management focused around the usual major problem weeds, grasses like rye and brome grass and broadleaf weeds like bifora and vetch.