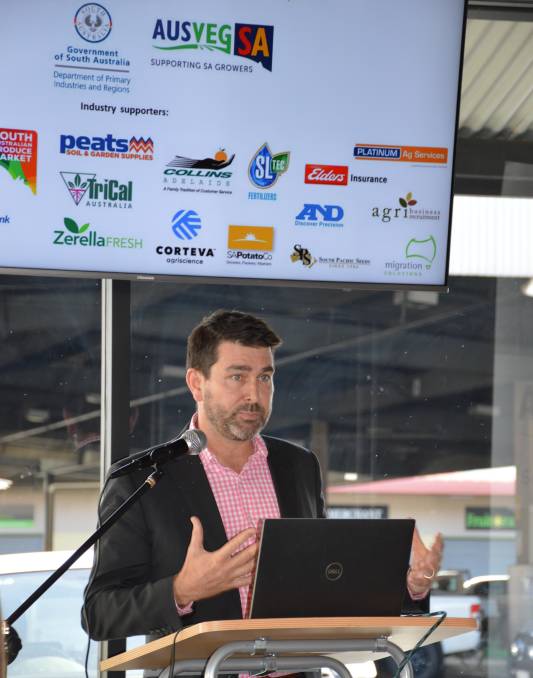 Speaking a the recent Hort SA conference, he said Australia was largely back to pre-2020 levels for spending in a number of categories, in what was a very fast-paced recovery from the largest economic recession since the global financial crisis.

Rabobank food and agribusiness research general manager Tim Hunt told listeners of the RaboResearch podcast that Australia, alongside China and the United States, had food service sales in March this year at or above March 2019 levels.

This came with a move away of the high retail sales of one year ago, with a return to restaurants and pubs.

He said more people returning to the office also meant more people in the central business districts and shopping centres.

"That's more likely to trigger the impulse product pick up, such as a bakery item or takeaway coffee," he said.

Mr Hunt said there was also a return to supermarkets having Sunday as their dominant day of trading.

"That's instead of it spreading across the week when we were all stuck at home," he said.

He said while there was largely a stabilisation in the marketplace, which would only increase as vaccination levels rose, there were still potential headwinds, such as further lockdowns.

Mr Hunt said it was also difficult to forecast if the food service lift would continue.

"The food spend benefited from people having money that hadn't been able to spend it on services, like entertainment, sports, cinemas and travel," he said.

"But these are starting to open up again, which may take away from people's money to spend on food."

NielsenIQ analyst Lewis Muscat said the Harvest to Home project with Hort Innovations was showing a shift in the way people were spending.

He said the biggest trend was that people were making fewer trips to the supermarkets but spending more once they were there.

"It's fewer trips but larger baskets," he said.

He said the larger shopping, combined with an increase in the value of fruit and vegetables in the past year, meant an increase in returns to the industry.

The same experience is also being noted in the dairy industry with Dairy Australia senior industry analyst Sofia Omstedt saying a habit that seems to have remained from COVID shopping was a shift towards larger packs, less often.

"They're buying a lot more when they do buy, but it's less often," she said.

"Usually Australia is a very mature market for dairy, and only grows with population growth, but over COVID we saw a significant growth in volume sales, although it is starting to go back to normal, there is still some minor growth.

"It's the larger pack sizes, such as a 3-litre milk carton is growing much quicker than a 2L or 1L carton."

She said volume packs tend to retail at a lower price but since there had been a pretty significant growth in value for dairy, this had been counteracted, but it could be an issue in the future.

Ms Omstedt said consumers were being more active, and outside, in restaurants and cafes - rather than staying at home and cooking - but takeaway consumption was still the biggest trend.

"Lots of dairy tends to be used (in takeaway), such as cheese on pizza or milk in coffee," she said.

While consumer behavior was largely back to normal, Mr Harvey said there were some permanent shifts that may have been present before but were accelerated by the pandemic.

The first was health and wellness, particularly focused on immunity boosting.

There was also a push towards larger, more established brands, in part because of their more developed supply chains and ability to meet the market.

Sustainability, including reduced packaging and carbon neutrality, had continued to grow in awareness.

Mr Harvey said snacking had always been popular but there had been changes, with more people at home more, as well as with the increased health and wellness trend.

The popularity of plant-based food had also accelerated during the pandemic, he said.

The final push was in e-commerce options.

He said while food service had typically been slower to embrace e-commerce options, many companies say their online strategies are five years in advance of where they would have been otherwise.