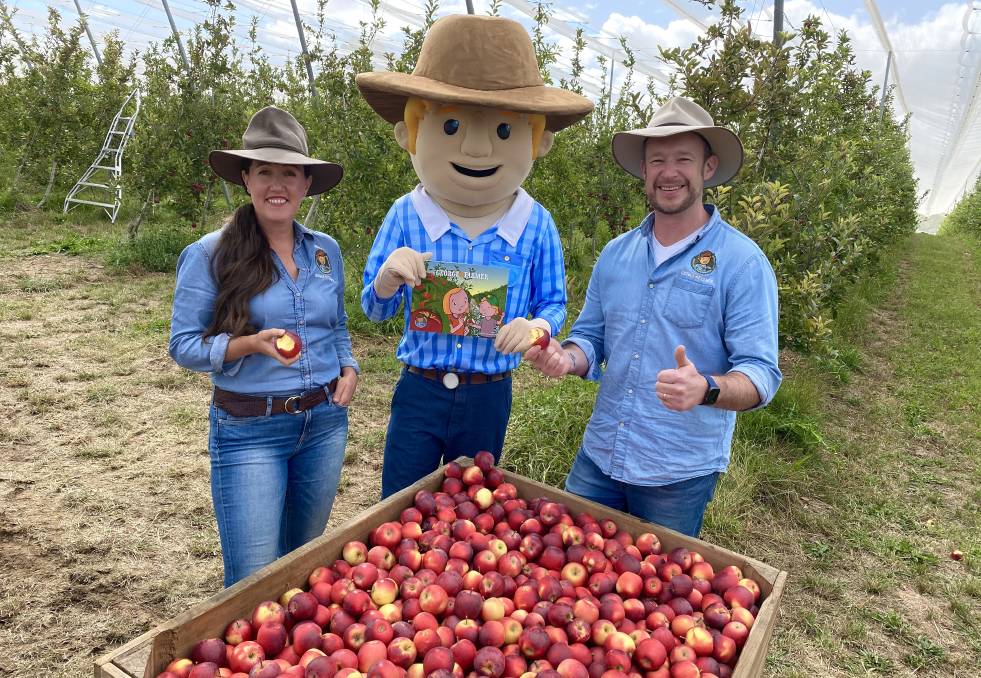 THE next generation of consumers - and potential producers - are getting some insight into the world of where their food comes from.

In the past two months, two more picture books telling stories about the sectors of agriculture have been launched under the George the Farmer brand.

In early April, a new book, entitled George the Farmer and the Hailstorm Heroes, came out, telling the story of orchardists recovering from a damaging storm - inspired by real life.

Co-creator Simone Kain said the story idea came after Hort Innovation launched its campaign following a hailstorm through the Adelaide Hills in 2018, affecting much of the apples at harvest time.

"I thought it would be great to tell the story through George, Ruby and the kids," she said.

During the story, the couple's children - Lucy and Jack - are devastated to hear that their apple-growing friends could have ruined crops.

They come up with a campaign to help their friends, by promoting apple juice, but also by educating consumers.

"As consumers - of all ages - we expect to see the fruit and vegetables looking perfect when we go into the supermarket," Simone said.

"It is important for kids to understand that they don't have to look perfect to still be delicious and nutritious."

She said there has been a great response from the apple and pear industry to the book.

Simone said there were a number of great stories to be told in the agriculture industry.

"We need consumers to understand that ag isn't just beef and sheep. It's really diverse," she said.

"We'd like to cover lots of different industries within the ag sector, such as bushfoods and insects - things kids find interesting - and tell the stories of what ag is about."

At the start of this month, the George the Farmer team travelled to Rockhampton, Qld, to attend Beef Australia 2021, where they also launched their latest book Beef Bonanza.

Beef Bonanza is the story of George, Ruby and the twins travelling from Penola to Rocky to attend "the biggest beef event in the country".

On the way, they stop to visit a friend in Moree, NSW, who has been impacted by floods and needs a helping hand.

Simone said they had wanted to do a "trip" story for a while and originally considered a hay run before deciding to cover the floods.

She said inspiration from stories often came through conversations with people from many different sectors.

"I'll learn something new about an industry and think 'wow, kids will love that'," she said.

She said she always runs the finished story and illustrations back past the original inspiration to make sure all facts and drawings were correct.

While originally designed as an interactive app, Ms Kain said George the Farmer "took on a life of it's own".

They soon had requests for physical picture story books, not just digital.

"We thought we were being quite cutting edge with digital - it's nice to see people still want to hold books," she said.

The characters of George and Ruby were also originally intended to be "inspirational", but after hearing the statistics that showed a large number of school students were not aware of where their food came from, she and co-creator Ben Hood realised it needed to be educational too.

Simone said while there was good progress on the brand in regional areas, and great feedback from teachers in metropolitan areas, they were still working to crack the urban market.

"Our return customer rate is really good - once people find the books, they tend to come back," she said.

"I think with COVID-19 and the shortage in supermarkets of certain food raised a lot of questions. Year on year, the interest in increasing about where food is from."

But she said these stories were just as important in regional areas, as often people growing up surrounded by one agriculture sector might not know much about many of the other sectors out there.

The pandemic also had an impact on the creative team behind George and Ruby.

I'll learn something new about an industry and think 'wow, kids will love that'. - SIMONE KAIN

After spending the past few years with a lot of travel and live events, 2020 forced Simone and Ben to sit back and take stock.

They decided that in 2021, they wanted to focus on creating more content.

They have already released two books this year, with another two planned from October onwards.

They have also teamed up with Primary Producers SA, using a federal government grant, to create four paddock-to-plate videos - on apples, chickpeas, dairy and forestry - which will be launched in August, while another three are being made in the NT.