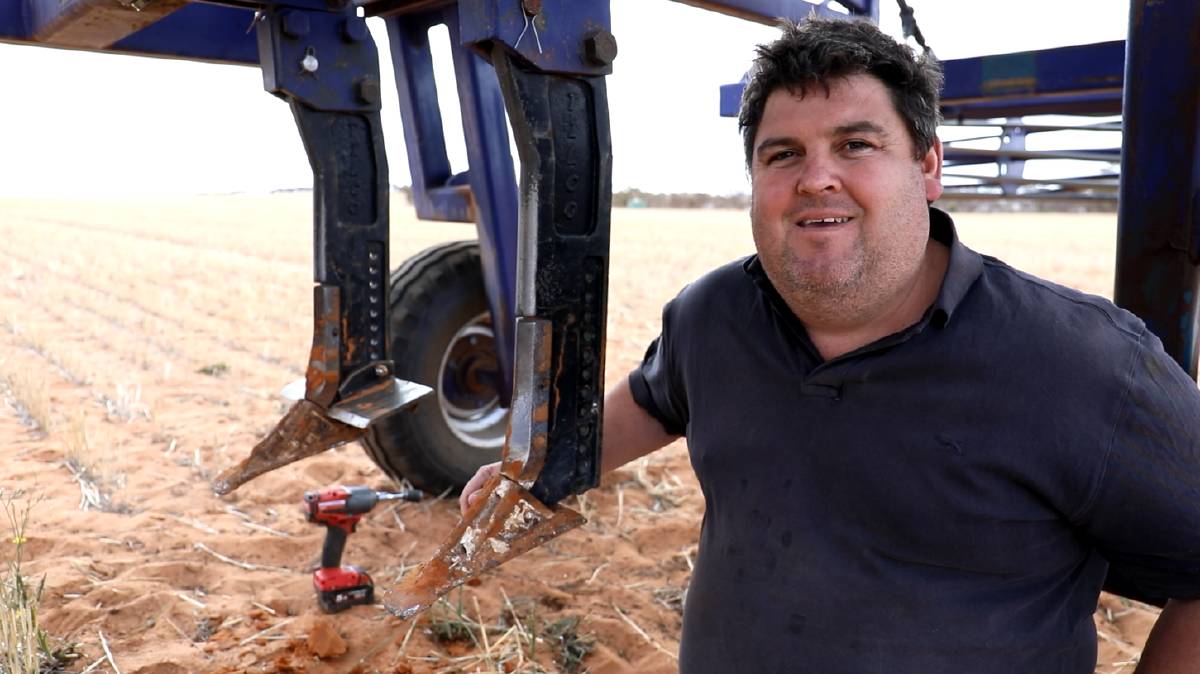 BETTERING EFFICIENCY: Michael Moodie is leading a Mallee trial looking at the use of wings on deep ripping tynes. Photo: Mallee Sustainable Farming.

A new trial in the Mallee is looking into whether deep ripping efficiency can be improved by adding wings to the bottom of tynes, if it would then mean less tynes are needed.

A new trial in the Mallee is looking into whether deep ripping efficiency can be improved by adding wings to the bottom of tynes, if it would then mean less tynes are needed.

Funded by the SA Grains Industry Trust, the trial is being run at Woodleigh by Mallee Sustainable Farming, with Frontier Farming Systems' Michael Moodie leading the project.

It builds on MSF research completed last year, where deep ripping resulted in a yield improvement of more than one tonne a hectare when straight tynes were spaced 450 millimetres apart. The same yield increase was still able to be achieved at a wider tyne spacing of 750mm, but only if wings was added to the tynes.

The wings are made of steel, extend about 150mm either side of the tyne, and screw onto the bottom of the tyne at a 45-degree angle, which is the same angle as the tip of the tyne foot. By having the wings down at a depth, soil disturbance at the surface is minimised, but soil at depth is loosened.

"The wings allow for increased soil loosening, without dragging a huge thick tyne through the soil - we're trying to maximise the area loosened by the tyne, while minimising the draft forces of pulling it through the soil," Mr Moodie said.

"We want to minimise the cost of the ripping process, but maintain the maximum yield benefit, so going from that trial last year, which gave us a few clues, we're looking at different row spacings in greater detail."

For each of the tyne configurations, there will be a straight tyne treatment, and a treatment with wings on tynes.

We're still working towards exact numbers, but the theory behind this is that fewer tynes, with wings, will be more economical than more tynes, with no wings. - MICHAEL MOODIE

"Our expectation is that without wings, we will always get the maximum yield benefit on narrower row spacings, but we want to see how wide can we go with wings attached, and still achieve that maximum benefit," Mr Moodie said.

He said while adding a wing meant extra force was required to pull the ripper, there was still potential for a saving in fuel costs.

"We're still working towards exact numbers, but the theory behind this is that fewer tynes, with wings, will be more economical than more tynes, with no wings," he said. "In a previous trial, we found that wings doubled the area loosened by 50 per cent, but the power penalty was 24pc.

"So instead of saying how many tynes we can get down to, you could say there is the potential to increase the efficiency of ripping by 26pc.

"That's assuming loosening that extra soil has an impact on the crop, and our initial estimates on draft force are right."

Deep ripping was completed in mid-April, with a barley crop to be sown onto the plot in the coming weeks.

ADOPTION NOT YET MAINSTREAM IN SA

WINGS on deep ripping tynes are not necessarily a new discovery, but their use is far from widespread in Australia.

University of SA research fellow Chris Saunders, who had input into the wing design in the Mallee Sustainable Farming trial being carried out, said wings had been used in North America and Europe before, but adoption in Australia was limited.

While the deep ripper used in the MSF trial is a custom-made Tilco model, Dr Saunders said some Agrowplow deep rippers had small wings integrated onto the side of the tyne tip.

"The Agrowplow wings are much narrower, whether we've gone too wide or not, we don't have a comparison for that," he said.

"But obviously the wider you go, increases the width that the tyne loosens soil, but there are draft force penalties from doing that."

Dr Saunders said the plates - made from steel - were easy enough to add to tynes, and were able to be bolted onto the tyne using the holes often used to secure inclusion plates.

He said the potential to use wings and inclusion plates together was also a possible future research direction.

"By adding inclusion plates, you have a draft penalty, but if you loosen more soil in front of the tyne and inclusion plate, the penalty of adding the inclusion plates might be less, so inclusion ripping would potentially become a more efficient process," he said.