THE rich agricultural and military history of the tiny Adelaide Plains town of Owen has come to life thanks to a stunning artwork emblazoned on the local silos. 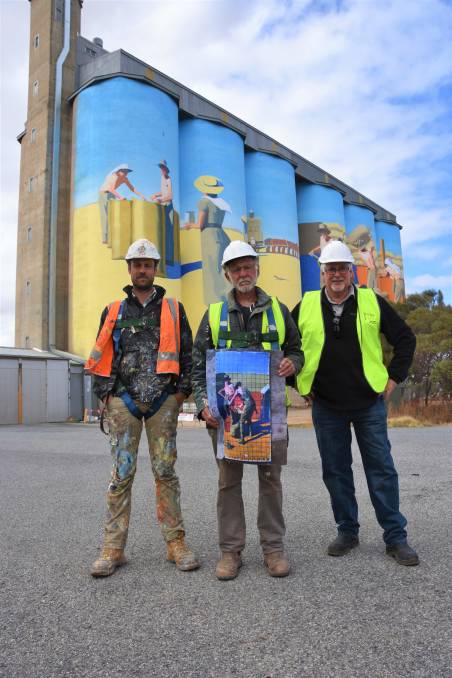 THE rich agricultural and military history of the tiny Adelaide Plains town of Owen has come to life thanks to a stunning artwork emblazoned on the local silos.

An idea years in the making, Riverton artist Robert 'Alf' Hannaford initially painted a concept design on poly pipes - to mimic the curvature of the silos - and NSW artist Cam Scale has spent the past six weeks scaling the artwork onto the 1728 square metre canvas under Alf's watchful eye.

"The scene is harvest around Owen in 1914 and men loading wheat bags onto the dray being pulled by a team of draught horses," Mr Hannaford explained.

"The next silo is the following year and we're in Gallipoli. There is one chap who should be recognisable as the same man who was loading wheat bags and a year later is throwing sand into a sand bag in the trenches at Gallipoli."

Fittingly completed near ANZAC Day, Owen Community Centre Silo Art Committee member Nick Smyth said the art titled 'Wheat bags to sand bags' was a nod to the region's agricultural and military history, as well as a tribute to the servicemen and women from the region who made the ultimate sacrifice in World War 1.

"We surveyed the town and interestingly enough the top two responses of what people wanted to see on the silos were agriculture and an ANZAC theme," Mr Smyth said.

Mr Smyth, who has visited Gallipoli twice, said the project's concept was born from a visual display he and other locals organised in 2015.

"We did a visual display of Gallipoli on the town's other silos one night in 2015," he said.

"We thought we'd have 50 people come along and 250 turned up. Out of that, we thought there was a lot of interest in the community about Owen's military history.

"That was the genesis of the project and a couple of years later sitting in the pub we decided to revisit the idea of painting the silos.

"It was suggested that these particular silos would be the best option because the full face of them faces the road as opposed to the others which are on a bit of an angle.

"In December 2018, the town voted to proceed with the concept and a committee of interested community members was formed that night."

While the project has had to overcome various hurdles along the way - from funding to COVID-related delays - it is indicative of the passionate group of locals who want to see the town prosper.

The eight-person Silo Art committee have spent the past two years raising funds by running community events, approaching local companies, applying for federal funding under the Drought Communities Program and rattling the fundraising tin whenever they could.

We're on the Silo Art trail now and we're only an hour from Adelaide so we want people to look at this artwork and town as a good destination for a Sunday drive," Mr Smyth said.

"Hopefully they'll stop and have lunch, a coffee, a beer at the pub and when we get more people visiting we can start to think about what we can do to make their visit memorable.

"It's an impetus for stimulus within the town."

Spending up to ten hours a day up on the cherry picker bringing Alf Hannaford's artwork to life was NSW artist Cam Scale.

Scaling up a small painting to a 1728 square metre canvas would be daunting for most but it's all in a day's work for Cam, who said the first step was placing a grid pattern on the small design and applying it to the silo to give himself reference points.

"For the first couple of weeks it's about getting up there and plotting those points and then you work in your mark up lines, then fill in areas between that," he said.

"My job is to block most of it in and once we've gotten to a stage where we've covered the entire surface, Alf comes back over and re-aligns, renders and perfects where it all sits."

Up to 300 litres of paint has been painstakingly sprayed, stroked and dabbed onto the silos since mid-March, with only a couple of days lost to weather and mechanical hold-ups.

"The weather has been remarkably good," Cam said.

"I've had some projects where we've lost weeks to weather. Wind is the problem moreso than rain. The wet surface is annoying but once wind gets over 45 kilometres an hour you can't operate."

Joining Cam on the cherry picker, particularly as the artwork entered its latter stages, Mr Hannaford said his original concept had been brilliantly captured - he said to look for some distinctive animals including a black falcon, sand goanna and his dog Rushkin.

"I went to Gallipoli a few years ago and that is where a lot of my inspiration came from," he said.

"The artwork is basically about shape and colour to be seen from a distance. Inevitably, one cannot go into minute detail so it's a relatively flat, schematic pattern.

"I wanted it to represent the strong light that exists here (on the Adelaide Plains) and in Gallipoli in mid-summer, which is very similar."