Advanced Performance Suffolks partners have decided to hang up their boots

IT was the end of an era for the Advanced Performance Suffolks (APS) Suffolk and White Suffolk flocks when they went under the hammer in a two-day dispersal sale on AuctionsPlus recently.

The APS flock, which has been running at the Dorman family's, Westdale property, was formed in 1984 in response to a one-off opportunity to import Suffolk sheep from the USA under an eight year trial 'Scrapie Assurance Quarantine Program'.

After initially importing two Suffolk rams and four Suffolk ewes, principals, Stan Dorman (WA), Ian Turner (South Australia) and Gerald Archer (Tasmania) successfully added genetics from a further four USA sires (2003 to 2006), plus semen from one Texel and two Suffolk rams and embryos from Suffolk and Texel ewes from the UK in 2004.

The greatest motivation for the syndicate was to accommodate a need to expand the genetic base of Australia's meat sheep industry, especially at a time when the Australian prime lamb industry was rapidly expanding through exports to many countries.

The group was extremely fortunate to get access to some of the very best and highest performing genetics from both the USA and UK and these were well represented in the bloodlines of the sheep on offer in the sale.

Its import programs from the USA and UK allowed it to produce "blends" of these two widely differing bloodlines and types.

The sale, which was brought about by the partners deciding to hang up their boots and retire, saw 221 White Suffolk and 267 Suffolks go on offer over two days and they sold to a top of $3500 for a mature Suffolk ewe, while the White Suffolk prices peaked at $2050 for a ewe lamb.

On the first day (White Suffolks) there were 58 registered bidders logged into the AuctionsPlus platform from New South Wales, Victoria, WA, South Australia, Queensland and Tasmania and nine of these were active online placing 180 bids resulting in 59 lots being sold online during the sale to buyers based in Victoria, South Australia and WA.

The second day of selling (Suffolks) saw registered buyer numbers logged on to AuctionsPlus increase to 60 and these came from Victoria, NSW, WA, South Australia, Queensland and Tasmania. Prices over the two day sale peaked at $3500 for this 2017-drop ewe, which was scanned in lamb to be carrying twins. The ewe was purchased by Nicholas Markham, Beaudesert, Queensland.

Through the duration of the sale 22 of them were successful, placing 1123 online bids resulting in 176 lots being sold online during the auction to buyers based in NSW, Victoria, Queensland, South Australia and WA.

Elders WA stud stock manager Tim Spicer said the Suffolk side of the catalogue produced a successful result with solid prices and a reasonable clearance.

"In the main the Suffolk ewes which were passed in were pregnancy scanned empty, but I suspect when they are re-tested they will be pregnant and will sell," Mr Spicer said.

"As for the White Suffolk side of the catalogue, we knew it was going to be a bit tougher as we didn't have as many enquiries on them.

"While we struggled to sell them during the sale 21 were sold straight after the sale which helped improve the clearance figures."

The first day of selling saw the White Suffolk flock up for grabs and in this catalogue there were 137 mature ewes, 62 ewe lambs, 20 ram lambs and two stud sires offered.

However with subdued buying enquiry only 37 per cent of the offering sold both at auction and post sale for an average of $515.

In the mature ewe offering the top price was $1200 paid by the Squiers family's Shirlee Downs stud, Quairading, for a 2017-drop ewe, scanned not detectable in lamb.

They are different genetics from what is out there, so we are looking forward to seeing how they go. - CHRIS SQUIERS

Shirlee Downs co-principal Chris Squiers said they decided to operate in the sale as they were keen to get their hands on some different bloodlines and genetics for their stud.

"When we started our White Suffolk stud in 2018 we purchased some ewes from APS so were keen to get some more ewes to add to what we purchased then," Mr Squiers said.

"They are different genetics from what is out there, so we are looking forward to seeing how they go.

"I had a good look at the pedigrees and selected the ewes from there. They go back to a number of the flock's best sires."

Along with securing the top-priced mature ewe from the offering the Squiers family purchased another seven mature ewes ranging from 2016 to 2018 drop for between $400 and $800 plus seven ewe lambs from $400 to $1250 which was paid for a twin born ewe lamb by A170617ET that is a descendent on the dam side of USA sires The Ticket and Cloud.

All up the Squiers family finished with 15 ewes at an average of $670 from the sale.

Another WA White Suffolk stud to buy was the Fairclough family's Stockdale stud, York, purchasing eight ewes (six mature ewes and two ewe lambs) to a top of $600 and an average of $525.

Laurie Fairclough said they decided to buy in the sale to get hold of some different bloodlines to infuse into their White Suffolk stud.

"We haven't had any genetics from APS before but I went to the open day and liked what I saw, so I picked out a few ewes to bid on," Mr Fairclough.

The biggest buyers out of the White Suffolk offering were Jason and Elyse Clothier, Wandillup, who purchased 18 ewe lambs to a $700 top and an average of $428 and Clint, Emily, Husley and Reef Ridley, Ridley Pastoral, Condobolin, New South Wales, who secured 18 mature ewes all at $400.

Mr Clothier said they saw the sale as an opportunity to purchase some good outcross genetics that have been around for a while.

"The ewes would be a good foundation base for our stud flock," he said.

"Initially we will be breeding rams to use in our own commercial prime lamb operation, running 1000 composite ewes and grow it from there and market rams," Mr Clothier.

The Suffolk offering on the second day saw greater interest from buyers located right across Australia and as a result 73pc of the offering, which consisted of 171 mature ewes, 69 ewe lambs, 19 ram lambs and eight stud sires, sold at an average of $726 and to a top of $3500 for a mature aged ewe.

All the Suffolk rams and ram lambs that were catalogued sold in the sale or straight afterwards.

The $3500 top-priced ewe was lot 143, A170679ET and it is now headed to Queensland after being purchased by Nicholas Markham, Beaudesert.

The 2017-drop ewe is sired by A100509 and pregnancy tested in lamb with twins to imported UK sire, Westend Panache P27.

Mr Markham said he was keen to purchase the ewe because of its English heritage and because it was joined to an English ram. 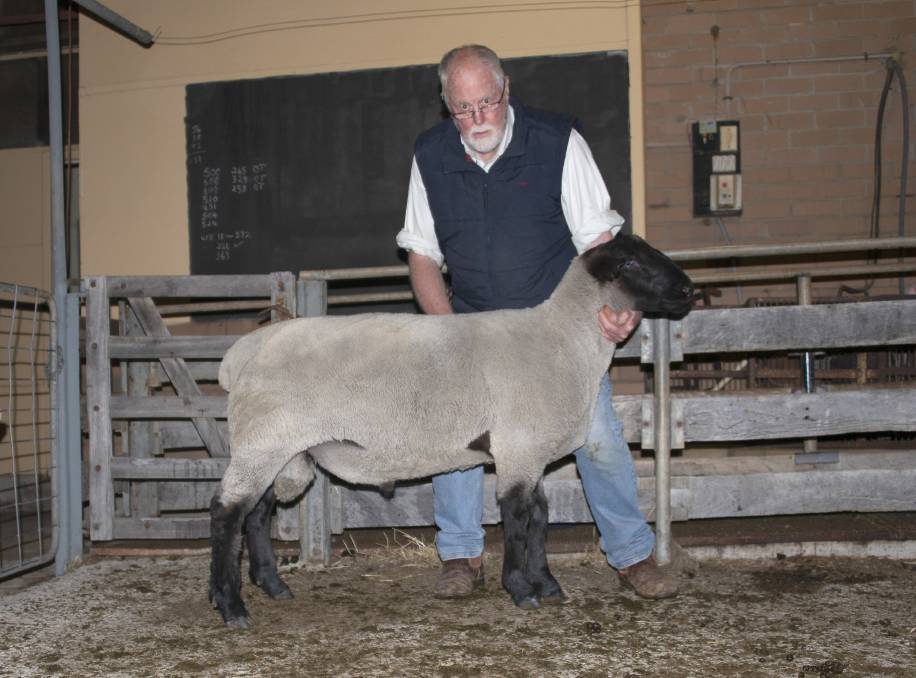 "We have bought indirectly from the bloodline in the past, many years ago," Mr Markham said.

"We are running a small stud of 60 ewes and we like this particular style of sheep."

The ewe was one of nine ewes and ewe lambs purchased at an average of $1011 by Mr Markham.

Along with this ewe Mr Good purchased another eight ewes to finish with nine at an average of $1656 plus 10 ram lambs for between $500 and $1000, for commercial use.

Kay Cole said they looked at the sale offering as they were looking for some new genetics.

In 1992 we AI'd with some American genetics that had just become available and using the purebred American bloodline and the three quarter American line we got incredible results with great structure, good bone and growth," Ms Cole said.

"We then blended these into our flock till we had what we believed to be super prime lamb sires with balance, strength of top-line, hindquarter, growth and meat while maintaining our constitution to thrive in Australian Eastern Wheatbelt conditions.

"So with that in mind, we will blend this ram with some of our flock because he is new genes and a blend himself.

"The gene pool in Australia is small for the Suffolk breed so we purchased this ram for his mix of American and Scottish blood which from experience should blend well together.

"With each of these genes nearly at different ends of the scale hopefully, we will have something in the middle and gain from both gene pools.

"This ram lamb is structurally sound, has good bone and correct breed attributes and we are looking forward to seeing what our blends bring into the future for our stud.

I purchased some sheep from the Glencraig dispersal a number of years ago, which were similar in genetics and they did very well so I was keen to get some more. - ELLI McDONALD

Ms McDonald also secured nine mature ewes and three ewe lambs from the offering to a top of $2250 and an average of $721.

She was also keen to secure some sheep from the sale as she had similar genetics before in her stud.

"I purchased some sheep from the Glencraig dispersal a number of years ago, which were similar in genetics and they did very well so I was keen to get some more," Ms McDonald said.

"I was really chasing the UK bloodlines as they are hard to get hold of."

After purchasing a draft of White Suffolk ewes, the Ridley family was also a major buyer in the Suffolk sale as well, purchasing 22 mature ewes and 21 ewe lambs to a top of $550 and an average of $449.

Clint Ridley said they were mainly chasing the Suffolks, but ended up also purchasing some White Suffolks which had black heads as they would suit their operation as well.

"We run a small Suffolk stud to breed rams for our own use which we use over our 4000 Merino ewes," Mr Ridley said.

"You don't see too many Suffolk dispersals, so we thought it was a very good opportunity to buy some good ewes to add to our flock and the pricing was very reasonable as well.

"We believe they will fit into our operation very well."

The story Prices peak at $3500 for dispersal sale first appeared on Farm Weekly.