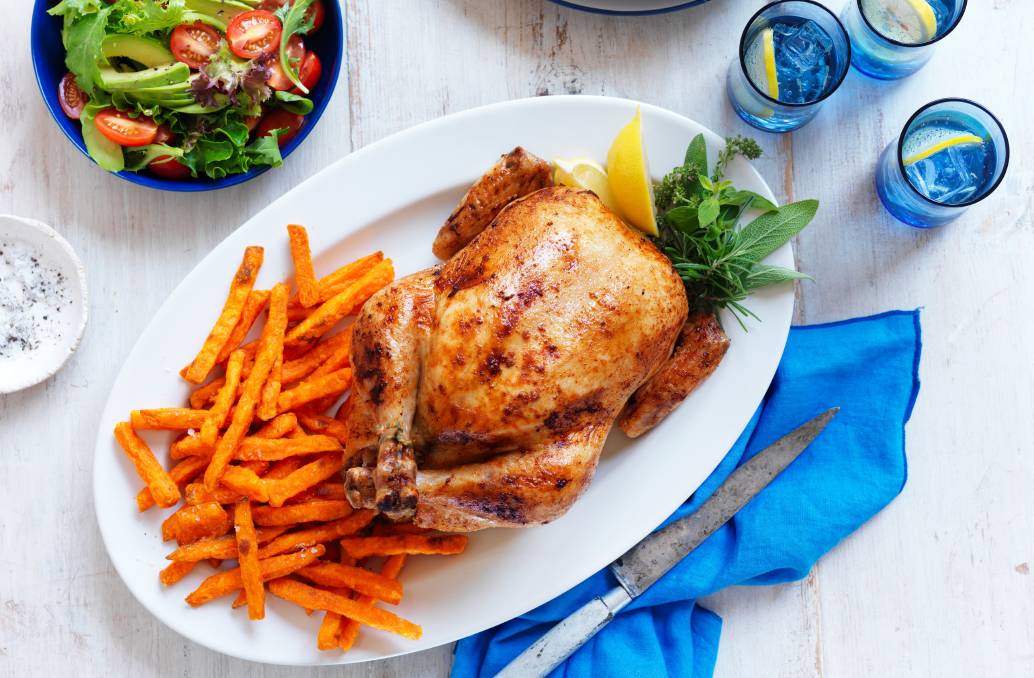 SERVE IT UP: Chicken consumption increased during the past year, and so too did production, despite COVID hurdles. IMAGE: Baiada

Australians will eat 46kg of chicken per person this year.

CHICKEN remains the most consumed meat in Australia and even the big hurdles from COVID incursions and workforce caps last year didn't put a dent in the upward trend of increased production the industry has maintained for more than half a century.

The latest statistics from government economists show that chicken meat has improved its position slightly on previous year figures in terms of most consumed protein.

The Australian Bureau of Agricultural and Resource Economics and Sciences March estimates have Australians chomping their way through an incredible 46.4 kilograms of chicken meat per person this financial year.

That represents nearly half of all meat consumed and compares to beef's 19.8kg per person, pig meat's 27kg and sheepmeat's 5.5kg.

That figure has grown each year since the mid 1960s when 57,000t was produced. Back then 52 million chickens were grown, compared to today's 678m.

She said the industry had put a huge amount of effort over the past year into making sure supply chains were minimally impacted by the pandemic, despite chicken producing companies having to significantly adjust how they operated to maintain a COVID-safe workplace, and in the case of Victorian industry, managing some significant disruptions.

The popularity of chicken meat was broadly thanks to it's unique combination of quality, versatility, broad appeal, nutritional value, affordability and environmental sustainability, she said.

"But interestingly, while the popularity of chicken remains strong, recent research has found that so do some long-held myths and misconceptions about Australia's chicken meat industry," Dr Kite said.

"We are hoping that, by better understanding how chicken is produced, Australians can continue to enjoy their chicken and feel great about doing so."

The research, from AgriFutures Australia, shows misperceptions about the conditions in which chickens are raised, and the use of antibiotics and hormones.

Similar research was conducted in 2008, and the most recent report shows that consumer belief in these myths still remains, even after a decade.

As many as 40 per cent of consumers incorrectly believe that hormones and steroids can be used.

Around 12pc of survey respondents said that antibiotics are used to increase the growth rate of meat chickens. This is despite the introduction of an industry-wide policy 15 years ago of no use of antibiotics for growth promotion.

Conversely, only 18pc of consumers surveyed correctly believe that meat chickens are raised without cages.

"In Australia, meat chickens are not raised in cages and the use of hormones and steroids was banned decades ago," Dr Kite said.

"Our rigorous Australian standards restrict antibiotic use only to treat unwell chickens or prevent infections if there is a high risk of disease. Also, strict withholding periods exist to ensure that there are no antibiotics present at the time of processing."

The research also showed more than two-thirds of Australian households serve chicken meat at least twice a week and more consumers indicated increasing, rather than decreasing, their consumption of chicken meat in the past 12 months.

Meanwhile, growers are pushing for government action following the release of a report from the Australian Competition and Consumer Commission just before Christmas on perishable agriculture markets.

Michael Moore, executive officer at the Australian Chicken Growers' Council, said growers had serious concerns about the strategic directions that Australia's major chicken processors had taken over the past few years.

He explained chicken was unique because farmers do not at any stage own the livestock, which belong to the processor companies. The grower provides farms and accepts a fee from the processor for husbandry of the birds from one day of age until they reach market weight.

In its submission to the inquiry, the ACGC said a number of processors had either gone out of business or been acquired, with the result being the supermarket duopoly being effectively repeated at a processor level in the chicken meat sector.

Ingham Enterprises and Baiada Poultry are responsible for around 70 per cent of Australia's chicken.

This had resulted in a great deal of market power being placed in two sets of hands, according to ACGC.

Mr Moore said chicken growers hoped the ACCC report would result in the tightening of unfair contract terms to restore bargaining power balance but so far the wheels were turning slowly.

Start the day with all the big news in agriculture! Sign up below to receive our daily Stock Journal newsletter.