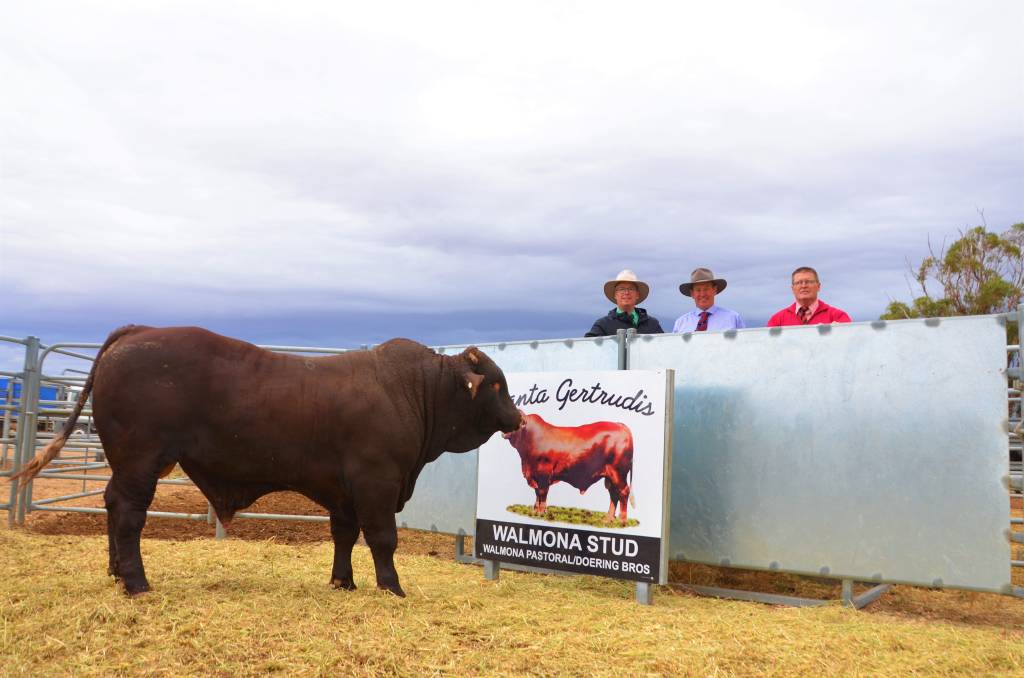 "CONSISTENT" genetic progress and rainfall in the northern parts of the country undoubtedly helped the sixth on-property Walmona Santa Gertrudis Invitational sale at Neales Flat to an $11,500 top price, as station operators begin to regain their confidence after prolonged drought conditions.

The 772-kilogram, 19-month-old bull was sired by Waco Morris M192. It had a 1.25kg daily weight gain and a 35-centimetre scrotal circumference.

Walmona stud principal Michael Doering was pleased with the sale's clearance and despite fewer station clients operating, the recent rain had provided confidence.

"We were going to retain the second-highest price bull but we really wanted to offer the highest quality and most even line we could to attract as many buyers.

"I hoped a few more stations operated but many have already bought cows in calf instead of needing bulls this year."

The second-highest price bull, Walmona Baron (P) WAL19MQ43, was also from Walmona stud and made $10,500, selling to Nangaringa's Dick Fogden.

Not originally expecting to purchase a bull, Mr Fogden, Loxton, made the final bid on Walmona Baron to enter the family's stud.

"It has a very good top line and is docile. It is a good boned bull that is neat in the sheath," he said.

The bull will be used over stud females in three months.

Elders stud stock's Tony Wetherall said the past few years had been tough for the studs because of drought conditions and it was encouraging to gain a positive result this year.

"The quality was high with consistent genetics. The performance of the bulls was clear," he said.

"Offering younger bulls attracts buyers, too. It allows time for them to acclimatise a lot of young bulls ready to go out - a lot of people want to take them home and acclimatise, and then join, so it offers longevity."

The sale was conducted by Nutrien Ag Solutions Beaton Agencies Kapunda and Elders Roseworthy with Mr Wetherall as auctioneer.