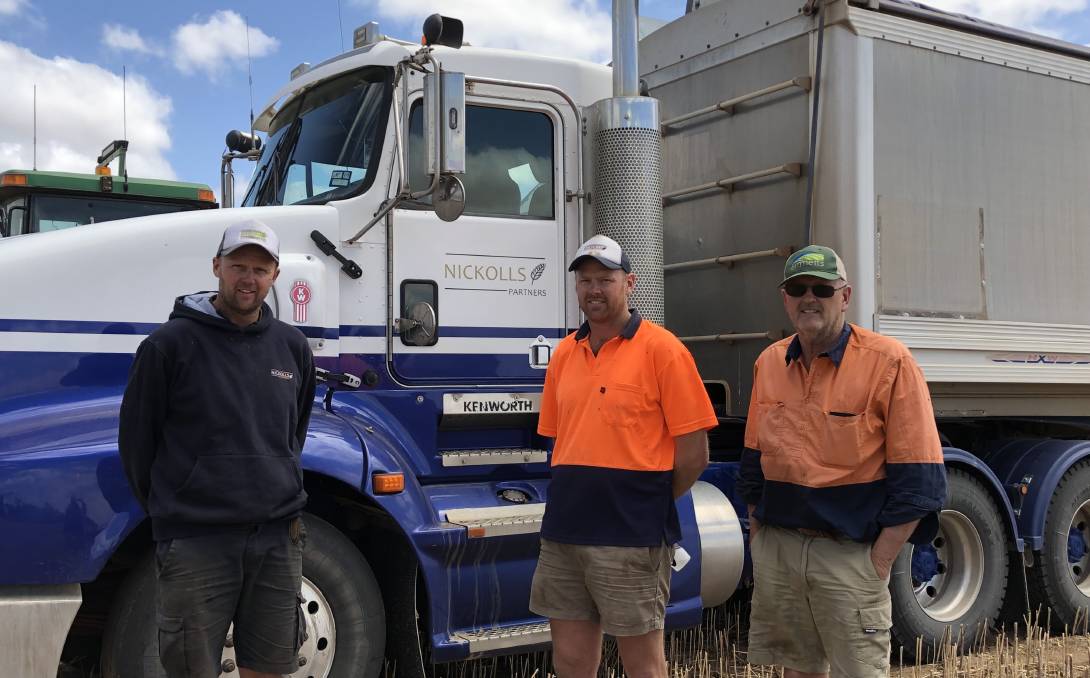 NEXT STEP: Wade, Chad and Jeff Nickolls, Pinnaroo, have been steadily adding to their precision agriculture arsenal across a number of years.

FOR the Nickolls family at Pinnaroo, the primary use of variable rate technology is not about reducing inputs but directing them to where they will have the biggest benefit.

FOR the Nickolls family at Pinnaroo, the primary use of variable rate technology is not about reducing inputs but directing them to where they will have the biggest benefit.

Wade Nickolls, who farms with brother Chad, wife Danielle and father Jeff, said they switched to a no-till knife point system on their 7000-hectare dryland cropping operation in 2002 - a major game-changer.

"(No-till) is probably the biggest change in the Mallee system, being able to keep (topsoil) there and know what you've got, but precision agriculture is probably the next biggest thing," Wade said.

Speaking at the Society of Precision Agriculture Australia expo at Loxton last week, he said they were working with a huge variance in their soils, with as much as three or four different soil types present in a single paddock.

He said their soils were generally about 40 per cent heavy loam, 50pc sandy loam and 10pc non-wetting soils.

He said the heavy loam could be the most challenging, as they often did not have enough moisture to manage it properly.

He estimates as much as 10-12pc of their gross income is spent on fertiliser inputs, predominantly phosphorus and nitrogen.

"We try to stick with that as well as we can," he said.

Wade said most of their soils were quite response to phosphorus, but they have had to change their way of thinking.

"We would look at a paddock and want it all to be lush and green but that just doesn't work in the Mallee," he said.

"We had to go to a way of thinking that 'these areas made money, spend the money there'.

"We're not necessarily cutting back fertiliser inputs, but reassigning them to the areas where they have most impact."

In previous years, they have used EM38 mapping, but Wade said they got the most benefits from looking at yield maps.

"They show exactly what we've got and where its come from," he said.

Variable rate seeding has been in use on the property since 2008, and they have been experimenting with rates in that time.

"We soon learnt some sands, no matter what you put on, are not going to grow more grain and be more profitable," he said.

Instead, while previously they might have aimed to grow 120 lentil plants per square metre, with different varieties, better fungicides and earlier sowing, sometimes aiming for just 60 plants/sqm could produce a good outcome.

"It may not apply to high rainfall areas but in our environment we could get it down to that and still grow the exact same yield as double the rate," he said.

One of the latest adoptions in the Nickolls operation has been protein mapping, first used last harvest.

Wade said they were still working out all its applications but one goal was to monitor nitrogen levels.

He said in a low rainfall area - with an average annual rainfall of 330 millimetres and growing season rainfall of 250mm - N was "the hardest thing to get a handle on".

Wade said they have found up-front applications of N were very important.

"We are always out before seeding, soil testing and ground testing to see what we've got," he said. "We're trying to maintain levels and keep ahead of the game so we're not going to mine it."

Wade said they also put N-rich strips through the paddock to see what impact that had.

The adoption of precision agriculture has been a gradual journey.

"Being a low-rainfall farmer, we couldn't just adopt everything in one day," he said. "Over the years we've had a crack at a few things - some of the things haven't worked out well, some have paid off in one season."

Since starting yield mapping in 2003, they have added autosteer, RTK inter-row seeding, Weed-it for spot spraying weeds through to fully-automated seeding.

Wade said there can be a lot of data with precision agriculture and he advised printing off maps in the early days and making notes to try and absorb some of the information.

But after more than a decade, as he learnt more about the farm, he said the biggest benefit he found was in looking back at recent yield maps.