The record-breaking sire kicked off a highly successful sale with the 95 bulls on offer averaging $12,380.

It has taken 35 years for the previous record of $120,000, set by Inverary Dominator D56, to be broken but the pundits had bet on Injermira's star sire to be the one to do it.

The $160,000 bull, Injemira Redford J006 Q287, was bought by a syndicate made up of ABS - Global Australia, South Australian stud Ardno and Vielun Pastoral Company, Mudgee.

Injemira Beef Genetics has sold a bull for $160,000, a new Australian Hereford record. The sire was bought by ABS, Ardno Herefords and VP Herefords. It’s the first time the record as been broken in 35 years. pic.twitter.com/dE5nfiStw2

The team of buyers was eventually able to outbid Jarrah Genetics, Rockhampton who competed strongly for the chance to take home what is set to be one of Australia's most renowned sires.

As Redford J006 Q287's sale was highly anticipated by the crowd it was sold first despite his Lot number of 51.

Following the knock of the hammer on $160,000, Injemira stud principal Marc Greening addressed the crowd saying he was overwhelmed by the result.

"It's probably something I will never do again in my lifetime," he said. Mr Greening said he knew at weaning that he had found a very special bull.

"I must admit I did send a photo of him as a weaner to ABS and said I think I've found you a bull, but I didn't expect that price today," he said.

"But this bull was just faultless in every way, he's in the top one per cent on all his data and he has the phenotype to go with it."

The record-smasher was already one of six Australian bulls to enter the 'Super Sires' program in 2021. 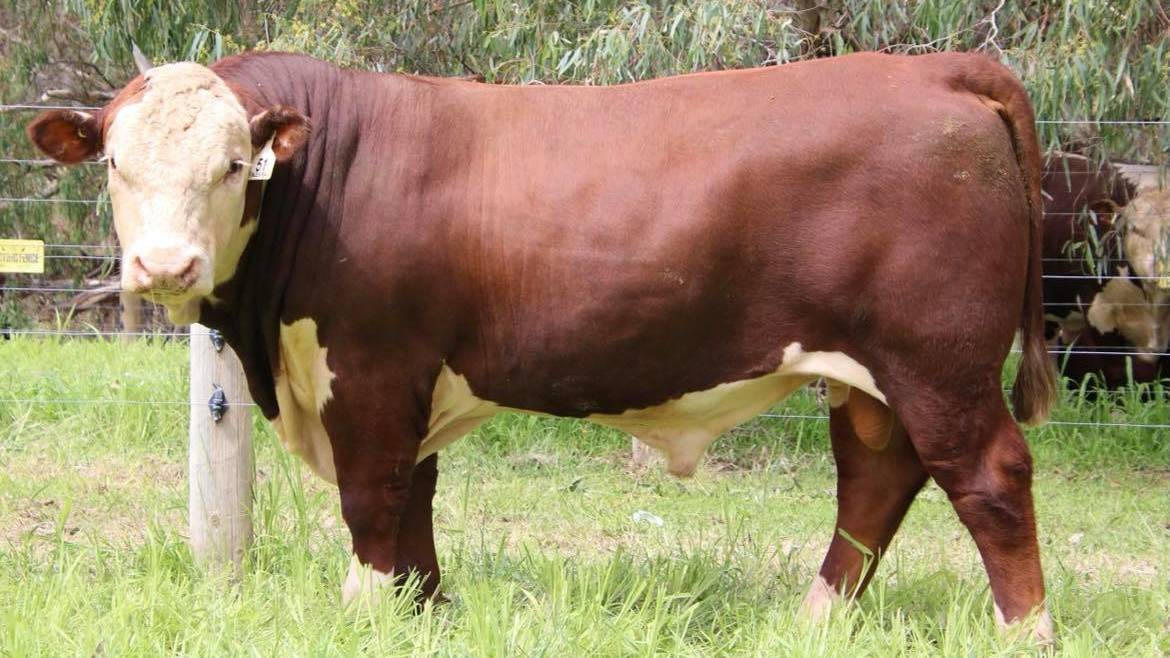 ABS beef product manager Bill Cornell said his semen would immediately be collected and they already had penciled in semen orders for the UK, Europe, Latin America and South America.

"I think he's got the potential to be the most widely used poll Hereford from Australia both overseas and domestically, that's why we bought him," he said.

Christine Comley, Ardno Herefords, Mount Gambier was another part of the syndicate and Mrs Comley said the bull will take their stud to the next level.

"Previously we have only been breeding bulls for our own in herd use but we are now looking to offer commercial bulls to producers in our region, as well as fast tracking the transition of our commercial herd from horned to polled," Mrs Comley said.

She bought six more bulls on the day, including one after the auction, for an average of $9033.

The final buyer of the $160,000 bull was Sam and Ali Broinowski of Vielun Pastoral Company, Mudgee, NSW.

Mr Broinowski said they had sold bulls many years ago and were now reinvigorating their Hereford stud and have started an Angus stud based on Millah Murrah genetics. The company is planning on holding their first bull sale in August.

"We're chasing really balanced genetics, a balance between genotype, phenotype and a balance within the traits, but the big thing with this bull is his structure is faultless," Mr Broinowski said.

The sale was conducted by Elders and Nutrien with Paul Dooley as auctioneer.