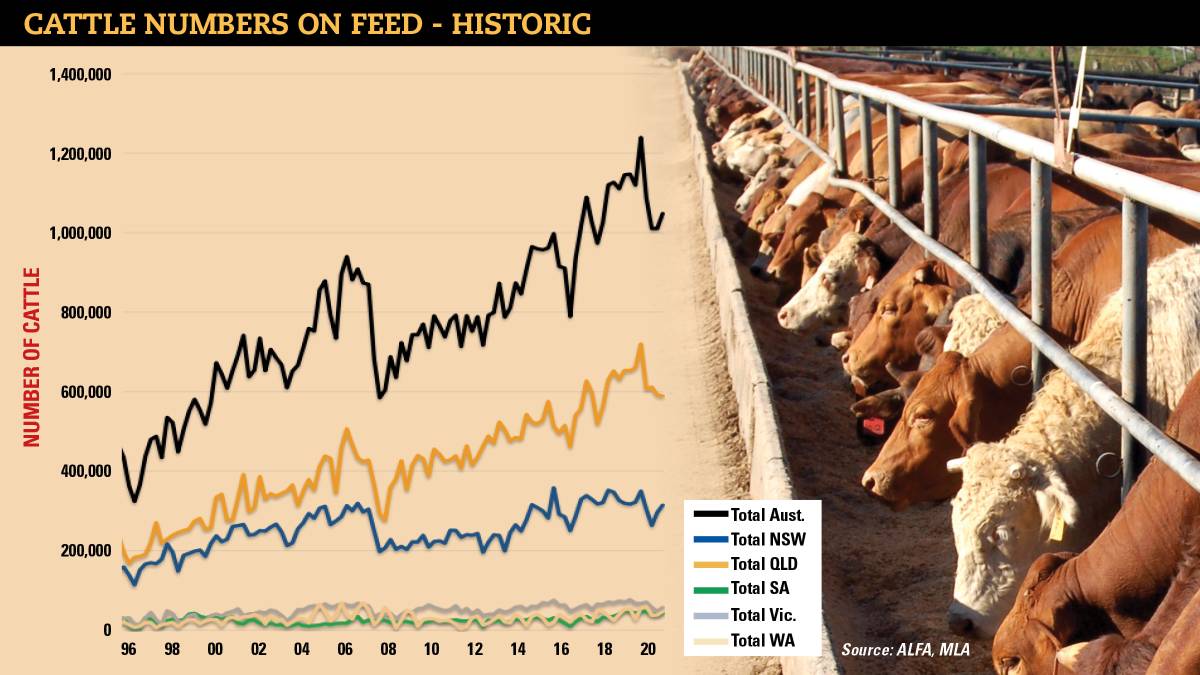 LOTFEEDERS are making themselves increasingly known in the cattle market as the reality of how tight supply will be this season sinks in.

Despite contending with an unexpected strong rally in grain prices this year courtesy of global demand dynamics, and a young cattle market that won't budge from record territory, feedlot operators with contractual export relationships weighing on their minds appear to now be shifting into a higher gear in terms of sourcing.

Reports from Victorian saleyards in the past week are that feedlot buyers from far afield drove the market to exceptional levels.

Agents reported a super strong line-up of feedlot buyers from northern NSW down to South Australia, including the likes of Rangers Valley, Hopkins River, TFI and Ray White.

Analysts and agents believe that feedlot buyer fervour is likely to continue now, and spread into other states, given spare feedlot capacity.

The latest industry figures, released last week by the Australian Lot Feeders' Association and Meat & Livestock Australia, show numbers on feed increased by 38,000 head to just under 1.05m in the final quarter of 2020.

That puts cattle on feed numbers above 1m head for three consecutive years.

Still, the current number of cattle on feed represents a national utilisation of 72.5 per cent, a stark contrast from the 89.8pc seen at the end of December in 2019, according to Thomas Elder Markets' analyst Matt Dalgleish.

It's a sign of the cemented role of the sector in Australia's beef industry and a good indication feedlot buyers will now be very active sourcing cattle, despite the competition from grassed-up restockers.

All states except Queensland recorded increased numbers on feed in the last quarter and Queensland's only fell by a tiny 0.5pc - a solid achievement against a backdrop of challenges ranging from COVID-19 and a global recession to a severe tightening of cattle supply, according to ALFA president Bryce Camm.

Grain-fed export prices held their own during the pandemic turbulence.

The problematic Chinese market, where the tariff safeguard on Australian beef was triggered and political tensions were felt, was largely offset by increased demand from the likes of Japan and South Korea.

MLA analysts report grain-fed beef exports grew by 21pc to 82,783 tonnes shipped weight in the final quarter despite the Australian dollar appreciating against the local currencies of all key export markets. Japan remained the largest destination.

Those dynamics bode well for ongoing growth in feedlot sector, despite the challenges 2021 is serving up.

Mr Dalgleish said the past two decades had seen a steady increase in the proportion of grain-fed cattle as a percentage of total annual slaughter, moving from 25pc in the early 2000s to 40pc last year.

He said climate variability and the potential for more regular and prolonged periods of drought would continue to encourage cattle into feedlots.

"Being able to reliably supply key export destinations with premium grain-fed Aussie beef will likely push the cattle sector to take more and more control over their production systems, so the chance that grain-fed beef turnoff as a proportion of total slaughter heads towards 45-50pc in the coming decade is fairly high," he said.