Nampara stud was one of SA Angus Week's star performers with a massive $4240 lift in average at its on-property sale at Lucindale on Tuesday afternoon. 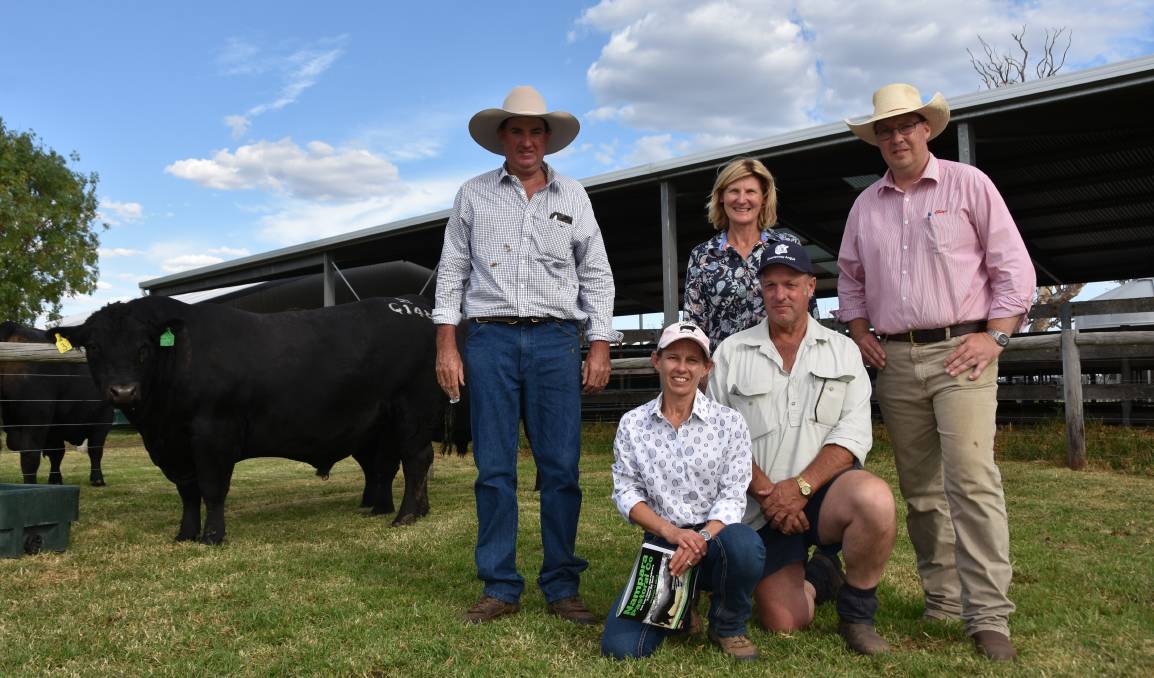 Nampara stud was one of SA Angus Week's star performers with a massive $4240 lift in average at its on-property sale at Lucindale on Tuesday afternoon.

Stud principals Stuart and Natalie Hann sold an extra 16 bulls compared to 2020, with all 74 bulls averaging a sensational $12,817.

This included the $40,000 sale topper, the highest price paid for any bull during SA Angus Week.

The sale got off to a flying start with the three highest priced bulls all in the first four lots.

Lot 2, Nampara Capitalist Q13, described by the Hanns as one of the best heifer bulls they had ever bred, sold for $32,000.

The 942kg bull had an eye muscle area scan of 124 square centimetres.

Their Elders agent Laryn Gogel said they were impressed with the bull's calving ease figure in the top 5 per cent of TransTasman Angus Evaluation and huge eye muscle figure of +10.4- in the top 4pc of the breed but also the bull's eye appeal.

"Phenotypically he was one out of the box with such a strong mid section and great big eye muscle and so deep and soft," Mr Gogel said.

"Chris in particular was looking for a safe bull - he has punch but also calving ease and is a curve bender with those growth figures ."

The first son Nampara has offered from WA bull Coonamble Junior, the April 2019-drop had plenty of presence weighing 976kg with an EMA of 135cm2.

It was in the top 15pc for carcase weight and top 7pc for net feed intake.

As the bidding slowed at $37,000 Trevor and Teresa Hall, Quarterway Angus, Scottsdale, Tas, threw in the winning bid for Junior Q148.

"We weren't planning to pay quite that much but when it came down to it he was what we were looking for- he will fit in well in our herd," Mr Hall said.

"Two years ago we bought a bull here that has done well for us leaving cattle with good feet and balanced numbers."

Quarterway have been breeding Angus stud cattle for about 65 years and sell about 100 bulls a year, including 60 in an on-property auction each March, as well as running a large scale commercial herd.

The Hanns also thought a lot of Junior using him to back up some stud cows and retaining semen in the bull for in herd use.

"For us it is so pleasing to get the butt end on him without having the heavyweight shoulders to go with it," he said.

"We are finding it hard to find bulls like that to use."

The bull was also out of an 11 year old female.

The closure of the SA-Vic border created a few headaches for the Hanns prior to the sale but in the end those Vic buyers who were outside the 70km cross border community bubble or unable to secure an essential traveller permit turned to AuctionsPlus.

Eleven bulls sold online to three different buyers through the platform but there was an incredible 131 buyers logged on to AuctionsPlus sale and another 116 viewers following the sale.

The 55 other registered bidders also raised their hands high including TFI Rural who bought four bulls to $18,000 and averaging $14,750 for their picks.

All of these bulls were used over commercial heifers which Nampara Pastoral Company sell each year in Mortlake, Vic and Naracoorte and Mount Gambier.

Mr and Mrs Hann were thrilled with the result which they said was well beyond their expectations.

"The efforts we have put in are paying off, we are culling harder and trying to get lines more even," Mr Hann said.

Mr Milne said the favourable season and fantastic weaner prices had enticed buyers to extend their budgets to secure the best possible bulls they could.

They (the Hanns) are commercial cattle people and know what it is like to sell cattle into all markets 365 days of the year. - ROSS MILNE, Elders stud stock

They were especially looking for those with good weight for age which they found plenty of at Nampara.

"They are a good Angus type with meat and muscle, good temperament and are easy doing and sound," he said.

"They (the Hanns) are commercial cattle people and know what it is like to sell cattle into all markets 365 days of the year."