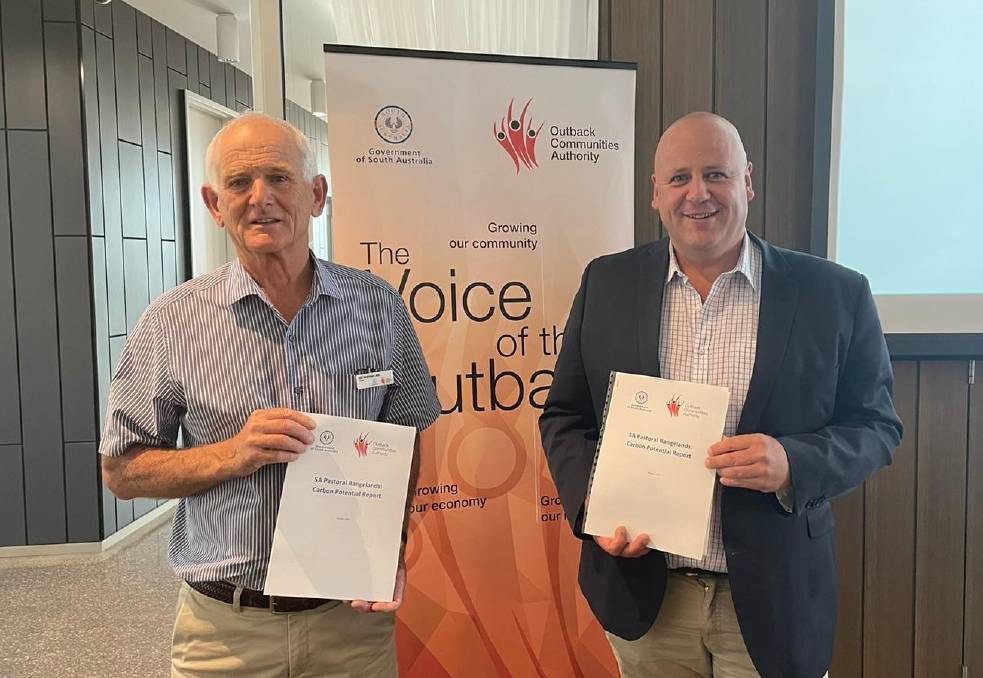 CARBON farming has the potential to bring as much as $84 million in value to the SA pastoral region each year, according to a new report released at a carbon farming forum held in Port Augusta late last week.

It came through federal government's Drought Communities Program, with the Outback Communities Authority using the $1m grant to fund the report and forum.

OCA chair Bill McIntosh said the idea to look into carbon farming came during the recent drought, as pastoralists were looking for options for diversification.

He said there had been a lot of interest in the topic, with people keen to learn about the opportunities, as well as the risks.

The report's analysis shows there are about 34 million hectares in the SA pastoral zone suitable to use the Human Induced Regeneration scheme - the best scheme for these landscapes.

SA rangelands presently make up less than 1 per cent of the national HIR scheme.

Of the roughly 300 operating HIR projects nationally, the majority are in western NSW, south-west Qld and the southern rangelands of WA, with just three registered in SA rangelands - none of which have generated an Australian Carbon Credit Unit.

But based on the 34mha estimate, the report suggests if just 10pc of the eligible areas took part, it would generate $28m a year for the region, while if 30pc participated, it could be worth as much as $84m.

This figure is based on a long-term average price of $20 per tonne of carbon dioxide equivalent. The present price of the Australian Carbon Credit Unit - also based on tCO2e - is about $18.50 and has been steadily increasing in recent months after a slight plateau during the early period of the COVID-19 lockdown.

Forum speaker and chief executive officer of WA-based Select Carbon Dean Revel said carbon farming had made great strides in a little over a decade.

"It's gone from a possibility to something quite well developed and a highly-regulated industry - contrary to what people might think," he said.

Dr Revel said carbon could be considered a commodity, with similarities to conventional commodities, such as it being a product with a market, and something that is verifiable.

You are eligible to earn a carbon credit because your management made it possible for that plant to grow. - DEAN REVEL

While traditionally some of the biggest buyers have been governments, that has changed with more and more businesses entering the market, either voluntarily or through a legislative obligation.

Dr Revel said unlike conventional commodities, even once it was sold, carbon remained where it was produced as part of the living biological system.

"You are producing both a financial asset and a natural asset," he said.

Report co-author and RegenCo CEO Tim Moore said the benefits of HIR were widespread, such as improved carbon in soil and better grass growth, meaning better livestock feed, with the potential for extra funds from selling carbon credits just "the cream" on top.

"A good carbon project should make you money with a carbon price of zero," he said.

Regional Australia 'should not pay bill' for carbon target

CSIRO tool to support farmers to learn about carbon markets

While there were a number of ways to generate carbon credits, including soil carbon sequestration, carbon forestry and emission avoidance, such as through savanna fire management, reduced livestock numbers or manure management, HIR is considered the best option for the SA rangelands.

It involves allowing the growth of already germinating plants, which might otherwise be cleared, to reach the height of two metres, with canopies to cover 20pc of the landscape, something deemed "forest cover".

"We're not talking about wall to wall thickets or encroachment of woody weeds, more of an open woodland," Dr Revel said.

Assessment is carried out by satellites and on-ground.

Dr Revel said the practice must include management changes, such as installing fences, or changing livestock movements, and could not include any existing "forest" trees.

"You are eligible to earn a carbon credit because your management made it possible for that plant to grow," he said.

Dr Revel said while strides were being made with other methods, at this stage soil sequestration measuring methods would be too costly for rangeland environments.

But he said there was the potential that as other methods improved, they could be "stacked" alongside the HIR scheme.

Dr Revel said one estimate - which would vary depending on the landscape, management techniques and price of ACCU - showed it could bring an extra $85,000 a year into pastoral businesses, although there were also expenses involved. Report co-author and Cape York Natural Resource Management CEO John Gavin said SA was "a little bit late to the party", although this also meant more certainty in the prospects.

"The new thing is the level of detail - when it started in other jurisdictions, there were a lot of unknowns, but we're critically in a different policy space," he said.

But he said anyone considering a carbon project should make sure they accessed independent legal and financial advice, as well as making sure any companies they dealt with were a signatory to the code of practice.

He said in the case of fire, credits earned until that point were safe, but the site was unable to earn more credits until it had returned to the same state as before the fire.

Primary Industries and Regional Development Minister David Basham said some of the issues holding back the take-up of carbon farming in the pastoral zone were legislative.

While most carbon farming projects are required to last for 100 years, or at least 25 years, the existing Pastoral Land Management and Conservation Act 1989 caps lease lengths at 42 years.

He said as part of the planned updating of the Pastoral Act, leases would be extended to 100 years, which would allow the flexibility required for pastoralists to take advantage of the diversification offered by carbon farming.

Mr Basham said carbon farming had the potential to introduce more jobs into the area, while still allowing livestock to continue in the region.

"We need a clear strategy for the approval process and work is well under way in that regard," he said.

"This will allow SA to realise the great value of the pastoral rangelands while continuing the good management of the land."