For more than 35 years Duck Island has been managing a composite herd with high fertility and meat quality. 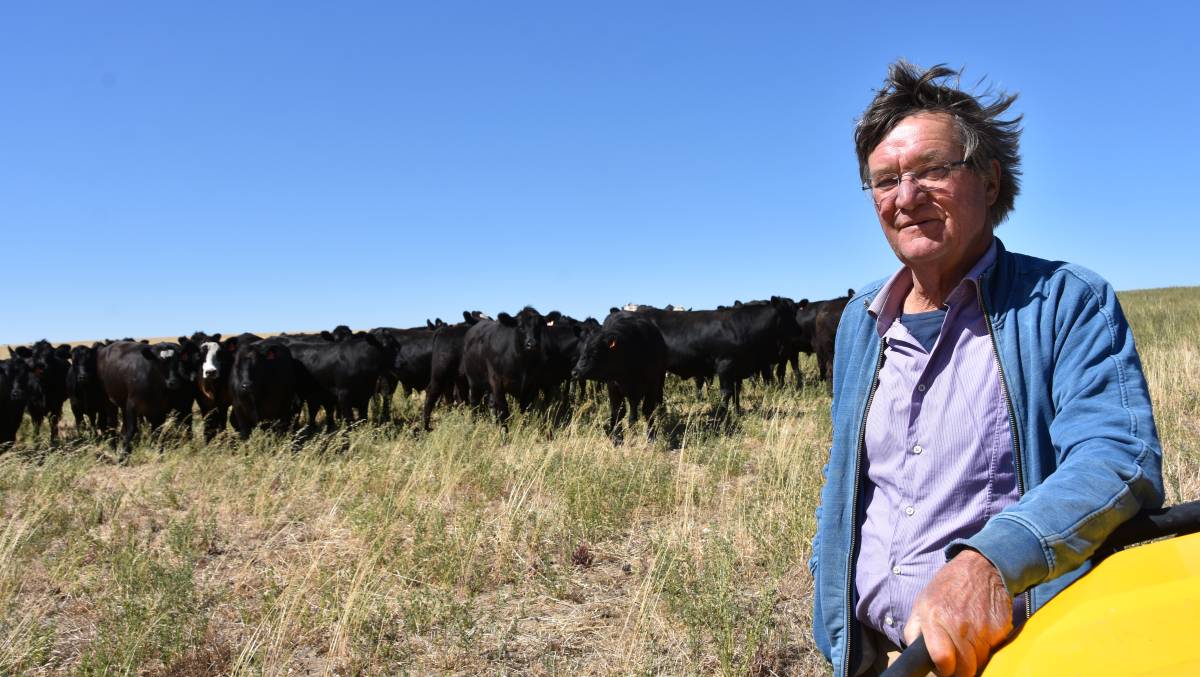 Keith beef producer James Darling has never been one to follow the pack in his approach to cattle breeding or farming - and it is paying off.

In the paddock, their steers are achieving up to three kilograms a day weight gains during spring and 1.7kg-2kg/day when feed dries off.

It is more than 35 years since Mr Darling decided to move from a purebred herd to developing Duck Island Composites, but they are still among only a few composite herds in the state.

"Most cattle breeders are slavish to their breeds and are, by nature, conservative," he said. "It is a big step to move from purebred to a crossbred or composite system, but we couldn't ignore the results we were seeing.

"We started out with a Poll Hereford herd and then put Simmental bulls over them and then Angus over their heifers, the calves were fantastic."

Mr Darling says the majority of Duck Island Composites are 50 per cent Angus, 35-43pc Simmental and the remainder Poll Hereford. They are moving closer to a 50:50 Angus and Simmental animal.

"We are looking to sit down the Simmental tail (head), promote the fat cover and square butt shape of the Angus, increase frame and milking ability of the Simmental (the milking breed of Europe), and selecting females whose growth and balance express these traits," he said.

"Temperament is number one and then structure, I can't stand seeing a bad structured animal."

Half of the herd are autumn calving (March-April) and the other half spring calving (October-November), which Mr Darling says spreads the workload evenly throughout the year for manager Stuart Rivaz and farm workers Tony Evans and Riley Braybrook.

Two drops of calves provide them with a good cash flow throughout the year and also more flexible options in managing the land.

In a good season, nearly all of steers are sold as EU steers on-hooks at 16-22 months of age between 640kg and 780kg liveweight.

Last winter with the exceptional prices being offered, they sold some steers a few months younger, averaging $2340 for the draft.

"We hadn't seen $7.20/kg (carcaseweight) as a price ever before so that was a big incentive for us not to hang on to them for too long," he said.

In the past decade there have only been two bulls added to Duck Island's herd, with most genetic diversity instead coming from their twice-yearly heifer artificial insemination programs.

Every heifer is AIed, with this totalling 170 in the spring joining.

Three weeks later they are backed up by single-sire mating herds for 56 days. This is the same joining period as the mature cows.

Prior to each AI program, Mr Darling selects four to five semen sires, mainly North American bulls, to use.

This data also forms the basis for the selection of 25-30 bulls twice a year for use in their herd or sold to clients.

"We don't rely on EBVs (estimated breeding values) but make our decisions based on actual performance," he said.

"Coat colour is important to our bull buyers. The vast majority of Duck Island Composites carry two black (coat) genes. We breed black cattle because that is where the market is."

In the past year, increased numbers of Duck Island's heifers have been retained to grow the herd since the purchase of Black Range in 2019, but Mr Darling says they are nearing optimal breeding female numbers.

"Our philosophy is to make the most money from the least number of animals, which is diametrically opposed to the push for high stocking rates (by the industry)," he said. "One of the key elements of the business is not being too greedy - to have the discipline to manage within the sustainable limits of the land."

Mr Darling is hoping the balance they have found between agricultural production and good environmental stewardship will enable the next generation to tell this story in marketing the properties' beef to consumers into the future.

For more than four decades they have planted many corridors of native trees and managed more than 3200 hectares of high conservation native vegetation.

Mr Darling is particularly proud of how they have successfully renovated previously saline flats on Duck Island, establishing annual ryegrass, balansa clover, strawberry clover and even lucerne, along with the tall wheat grass and puccinellia.

He says the key to sustainable farming is keeping cover on the ground through all seasons.

"The planet is a fragile creature and we are temporary custodians of it. Unless we manage it properly, that fragility will increase to our detriment," he said.