The Blackford blaze has left a trail of destruction, but among the hardest hit was Hillcrest Pastoral Company, which had four of its properties at Avenue Range and Lucindale in the line of fire. 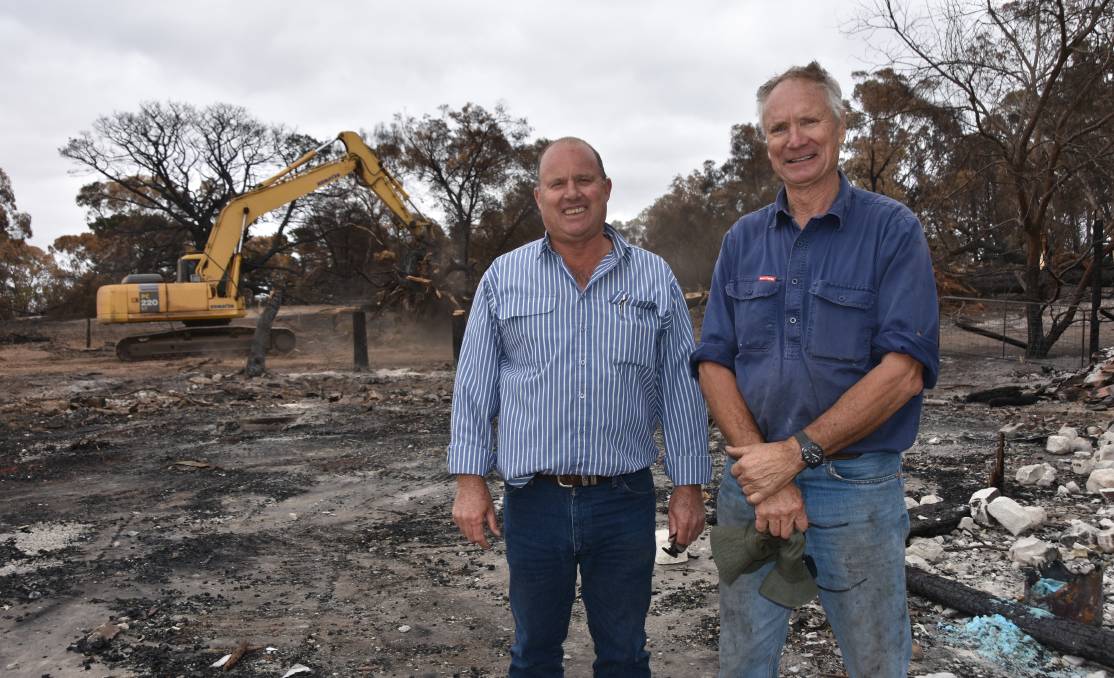 Last week's Blackford blaze has left a trail of devastation with the fire scar more than 14,000 hectares, but among the hardest hit was Hillcrest Pastoral Company.

Hugh and Clare Bainger were unlucky to have four of their properties at Avenue Range and Lucindale in the line of fire.

About 2600ha they own is in the fire scar; from six paddocks on the back of Conkar Ridge to Ardune which has been almost wiped out, to Conkar Plains closer to Lucindale, where there is only 120ha unburnt.

RELATED: Rate of spread of Blackford fire was "off the scale"; Ross

As the fire approached on Monday last week, Mr Bainger was in a tea tree swamp paddock on Hillcrest where he was trying to use a farm fire unit.

He thought he may be able to "interfere" with the fire and direct it further south, but with the high speed of the fire he was forced to retreat.

"I was doing 30km/hour in the ute and I couldn't keep up with it, it kept going behind me," he said.

He began watering his home down at Hillcrest to prepare for the fire front with a hose mounted reel he had fortuitously installed just days earlier.

Soon after he heard a siren as the aerial bomber dumped a load of fire retardant on the roof of the house.

When there was a wall of flames approaching he knew it was time to get in an underground bunker where he remained for 15 minutes, emerging to find 80 per cent of Hillcrest's paddocks blackened but the house intact.

Mr Bainger says Thomas Elder Consulting ag management consultant Bruce Creek and his wife Libby, who has worked for Hillcrest's business for many years, have been a godsend in coordinating the recovery and checking livestock.

He also praised the efforts of his managers on the affected properties; Malcolm Gill, Shane McGurk and Ron Bennier.

With 4500 bales of hay gone up in smoke, Mr Creek says they are on the hunt for agistment for their surviving stock, and are particularly keen to find somewhere to run 400 European Union-accredited heifer weaners for a few months.

They also lost 2900 bales of straw which were baled from the crops on Ardune.

Mr Creek thanked the army of locals who had come to humanely dispose of burnt stock, as well as the generosity shown by those donating hay and helping clean up.

He said it would be a difficult few months ahead for many in the district.

"The burnt ground isn't going to disappear until July. That is going to be the hardest part mentally for everyone - to see it every day," he said.

"The first two or three weeks we'll see the biggest progress cleaning up but then the hard slog begins resurrecting fences and a lot of confinement feeding."

PIRSA says it is still undertaking an impact assessment on the Blackford fire ground but the livestock losses, as of Monday January 18, are 7192 sheep and 235 cattle.