Nearly 70 trucks, plus utes and trailers, carrying more than 3000 bales of hay made their way to fire-ravaged Lucindale on the weekend in the Mount Gambier Hay Run. 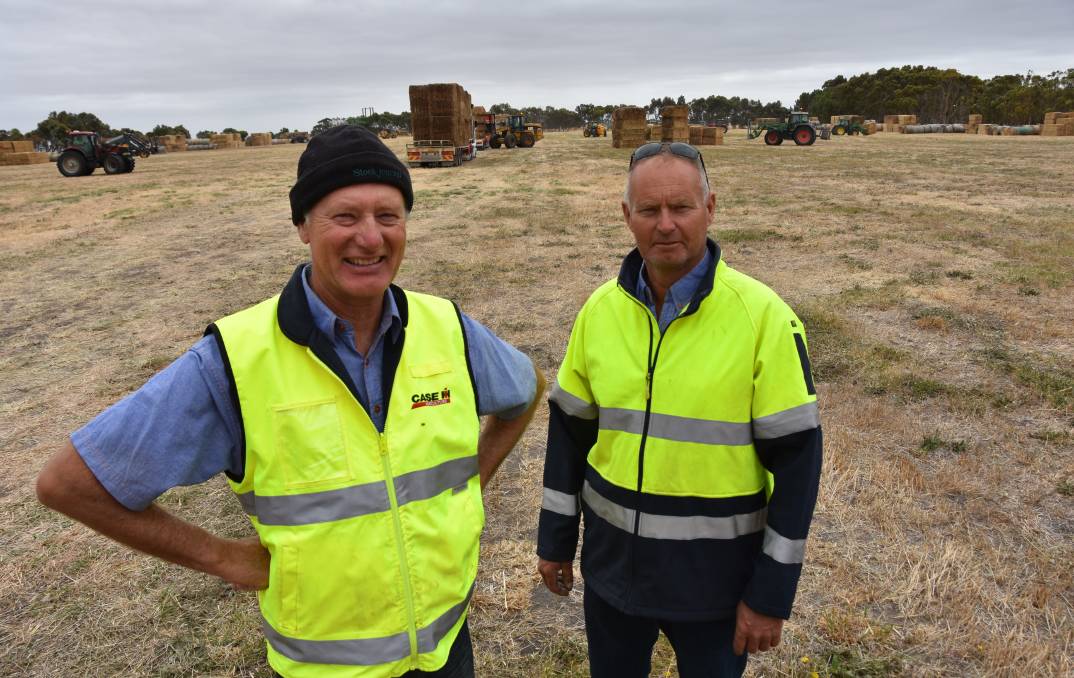 The Lucindale and Avenue Range communities have endured a hellish week with the Blackford blaze leaving a more than 14,000 hectare scar on the landscape and with it high livestock and infrastructure losses.

But just a few days after the fire, humanity gained the upper hand with one of the state's largest ever hay runs rolling into town on Saturday with more than 3000 bales of donated hay.

The convoy of nearly 70 trucks, plus a few utes and trailers, came from as far afield as the Eyre Peninsula and the Vic Wimmera.

The truck drivers who volunteered their time were greeted by cheers and thank you signs from locals who lined the main street.

The trucks filed through town to Yakka Park, the South East Field Days site, on the western side of Lucindale, which has become the fodder depot for the fire recovery.

From there the hay was unloaded by the Lucindale Lions Club members and other local volunteers-many who have already had a big week fighting the blaze and mopping up afterwards.

Previous Hay Runs which he helped organise from Mount Gambier to Keilira and Kangaroo Island last year took at least a week to come together.

"Everyone has just jumped on board, I've had no sleep but it doesn't matter when you get here and see this," he said.

Mr Smith said he was motivated to assist SA farmers in need as they were always there for the country supplying food.

"No offence to city people but milk is not from a carton at Coles, this is where it starts," he said.

"If we don't have these cattle and sheep farmers that have been affected we have nothing."

Horsham farmer Sam McGennisken, who was among a convoy of 12 trucks from the Vic Wimmera, said when he was contacted by Mr Smith it was a "matter of how many trucks do you want and where are we going".

"We've been in trouble before and needed help and really appreciated it when we have got it," he said.

"When people are down we want to help get them back on their feet and get them going as quick as we can."

He said the hay delivered on Saturday , plus another 10 loads which rolled in on Thursday and Friday, would not only provide fodder for the 70 affected properties who needed it for their surviving stock, but also lift the spirit of the whole community.

"It is a lifter, you just have a bit more faith after what we have experienced," he said.

He said the Lions Club had been quiet with the cancellation of the 2020 and 2021 South East Field Days due to COVID-19 so taking on the project of the fodder depot would also give its members a strong purpose to come together for.

"Since Ash Wednesday (1983) we have really dodged a bullet up until the Keilira fires last year. We've had some great seasons and some great feed so it is going to be inevitable that one day this happened," he said.