The massive clean-up effort following Monday's frighteningly fast-moving Blackford grassfire has begun, as graziers count the cost of the blaze that engulfed more than 14,000 hectares in the South East. 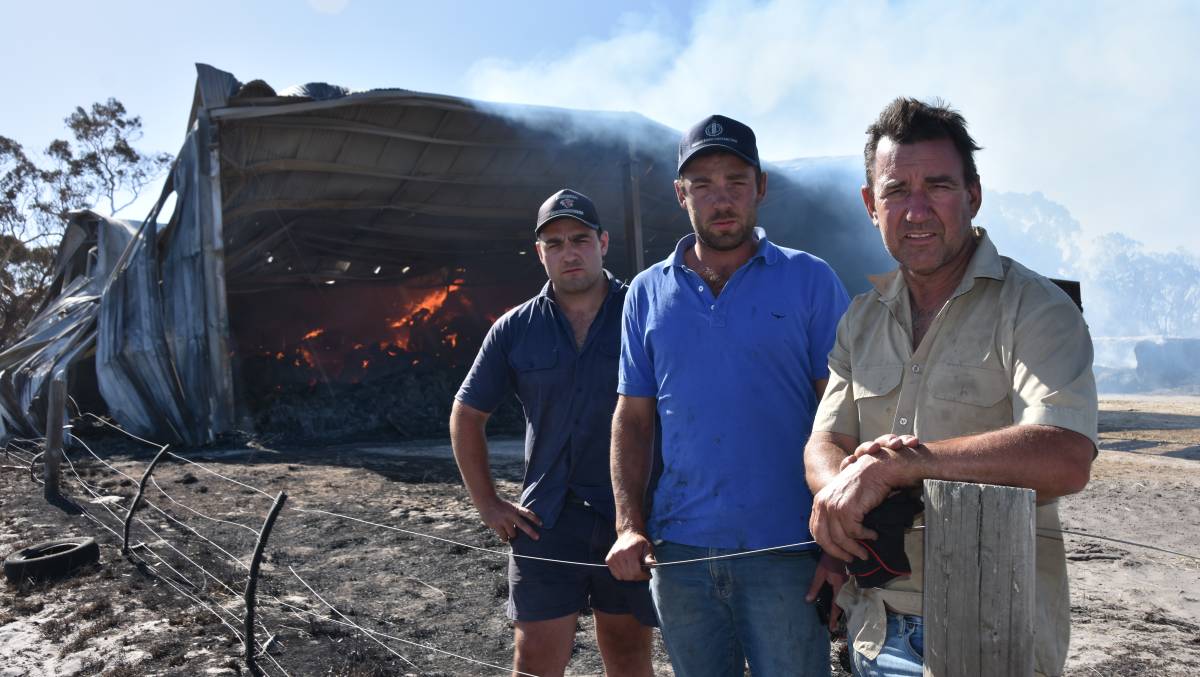 The massive clean-up effort following Monday's frighteningly fast-moving Blackford grassfire has begun, as graziers count the cost of the blaze that engulfed more than 14,000 hectares in the South East.

Having started in a paddock near the south-eastern end of Mount Scott Conservation Park, SA Police have listed the cause of the blaze as "undetermined but non-suspicious".

The fire moved in a south-easterly direction, with large parts of Blackford, Avenue Range and Lucindale affected, and was brought under control at about 9pm on Monday, following ongoing firefighting efforts and a drop in wind speed and temperature. It was officially contained shortly after 11:30am on Tuesday morning.

The SA Country Fire Service has reported the area burnt by fire to be 14,073ha, with about 70 properties affected.

As of Wednesday morning, confirmed livestock losses sat at 6174 sheep and 11 cattle, PIRSA said, with the number expected to increase as Rapid Damage Assessment teams move further through the fire scar in the coming days.

At least three structures have been confirmed as lost or substantially damaged, and while PIRSA was unable to comment on specifics of hay and silage losses, Lucindale CFS Group Deputy Officer Ian Jenke said losses would be "huge".

"I don't think anyone knows exact numbers yet, but there were burnt stacks of hay and silage everywhere when I was driving around on Tuesday," he said.

Mr Jenke said a number of factors contributed to the blaze's ferocity.

"We had a good winter in 2020, and so there was lots of dry feed around, coupled with the hot day and the wind constantly shifting, it made it all undefendable in a way, you couldn't fight it," he said.

Mr Jenke was particularly proud of the overall firefighting effort, which he said stopped the fire from covering an even larger area.

"The firefighting effort was supreme, the aerial side of it was fantastic, they saved numerous houses and the farm firefighting units were brilliant too, they worked together extremely well and the number on the ground was amazing," he said.

The blaze was battled by 40 CFS firetrucks, 200 firefighters and 101 aerial water drops, as well as numerous FFUs.

The Victorian Country Fire Authority also sent resources to assist, including four fire trucks and a command vehicle, while One Forty One Plantations assisted with two fire trucks and two water tankers.

CFS strike teams were on the ground on Wednesday, extinguishing hotspots, and Mr Jenke said the teams would remain in the area for as long as required.

With the initial Watch and Act warning message having covered an area stretching almost to the Vic border, as a result of the uncontrolled and fast-moving nature of the blaze, Naracoorte and Lucindale Council mayor Erika Vickery said it was extremely lucky the fire was not even worse.

"The wind was going in a south-westerly direction, then turned west, turning the fire on itself a bit - if the wind hadn't changed, it could have been a different story," she said.

"There have been a lot of things we've been talking about in regards to long-term recovery, we just need to settle ourselves and make some decisions, and then start working on it all."

In a demonstration of community spirit, Mount Gambier Hay Run in conjunction with the Lucindale Lions Club is putting together a convoy of trucks to deliver donated fodder and fencing equipment to the South East Field Day site at Lucindale on Saturday.

Last year, the volunteers delivered 70 loads to nearby Keilira fire victims and organiser Adam Smith says this task is "a bit emotional" already knowing some of those affected.

"You know what they went through last year and now there are a few having to do the same thing this year," he said.

Within hours they had 30 trucks lined up from as far afield as Tumby Bay and Warracknabeal in Vic and many more are expected.

Mr Smith said farmers were the "backbone of the country" and he and his team of volunteers were only too happy to "roll up their sleeves" and help the Blackford, Avenue Range and Lucindale fire-affected farmers get back on their feet.

"I know farmers don't like to accept help or charity but it is Australia supporting them and what they do," he said.

"When farmers are going well the country is going well."

The Higgins family found an apocalyptic scene when they returned to their property, Patanga, at Avenue Range on Monday night with blackened trees at their front gate, the understorey of their scrub reduced to ashes and even little remaining of the Christmas display they erected for the local community competition.

They believe an aerial bomber dropped a load of water just in the nick of time to save their home, but everything around it is charred, even the pot plants on the verandah.

Keith Higgins says he couldn't be prouder of his sons James and Grant in how they prepared the property for the fiery onslaught, while he and his wife Karena raced home from Murray Bridge.

"When James and Grant left here they couldn't get out the driveway so they had to go out the back cross country and get over a drain, when they left here it was all alight so they did an amazing job," he said.

They are also hugely grateful to their agent, Miller Whan & John Kingston's Mike Newton, who moved livestock before the fire to ensure none of their 500 Shorthorn cattle and 300 sheep were lost.

"We have one cow that has a bit of udder burn that we may have to put down but that's it at this stage," Keith said.

He says it is daunting knowing where to start the clean-up though, with 80 per cent of their 600ha property burnt along with this year's fodder - 400 bales of hay and 600 bales of silage - as well as two tractors and feed cart which were in the hay shed for weaning, but he is confident the fire ravaged community will rally together.

The Higgins family have already been overwhelmed by the community support with numerous offers of agistment and two B-double loads of hay arriving within hours from Michael and James Weckert at Bordertown. Keith and Karena's daughter Shannon Butler and her husband Rod have also been a huge help in the immediate clean up.

"We'll get it all sorted out and the stock off the place and then go from there," he said.

"Manual labour for fencing is the thing we'll need most and with manual labour comes support and friendship."