Having started out as a livestock agent in his mid-teens, Nutrien Strathalbyn's highly-respected Richard Snoswell is retiring, 47 years later. 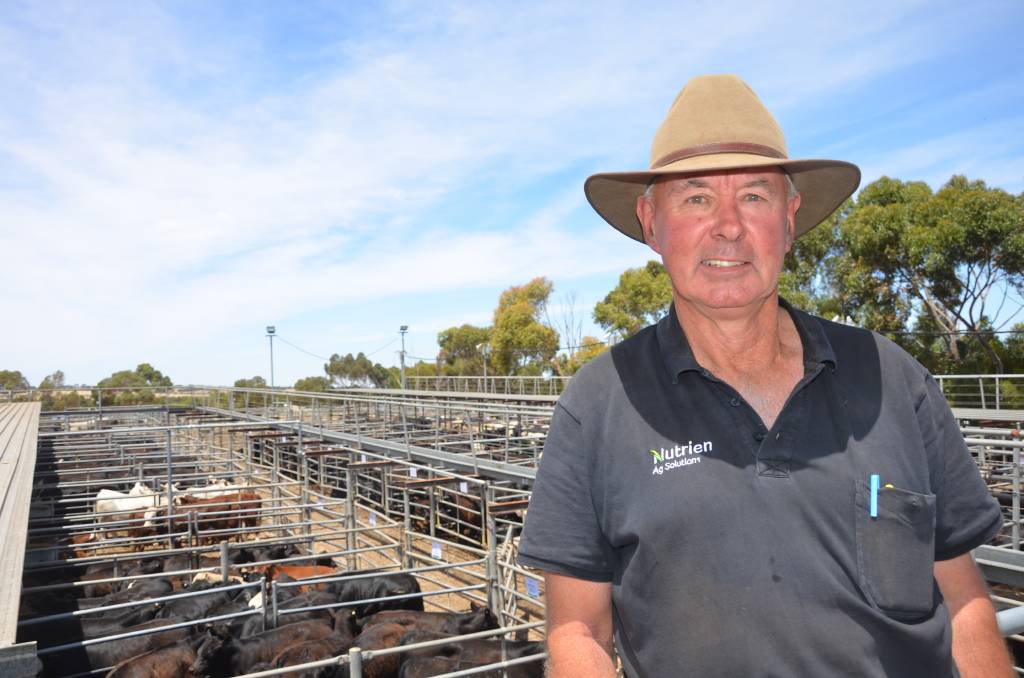 After nearly 50 years in the livestock agency game, and having never taken any more than a two-week holiday at once, Nutrien Strathalbyn's Richard Snoswell has decided to hang up the boots.

Having grown up on a 400-hectare mixed farm in Keith, Richard first started as a stock agent for the local Bennett and Fisher branch, when he was 16 years old.

"The interview process back then was pretty much nothing, my interview went for about five minutes and I got told I had the job basically straightaway," he said.

Richard well and truly hit the ground running, with his first day on the job being an 18-hour day at the Keith saleyards.

"It was a market day, and I started at 6am and got home at midnight - it was quite the initiation into the stock agency field, but I didn't get put off with that long first day, so I stuck with it," he said.

"I didn't think much of the long hours, I thought 'this is what it's all about', and it was great."

Richard remained at the Keith branch for nearly three years, before moving to the Streaky Bay branch.

I haven't really regretted any move that I've had, it all gives you a bit of experience. Some places were better than others but it's all part of the journey. - RICHARD SNOSWELL

"When you're young and single, you know that (moving) is going to happen, it's always part of the deal," he said.

"In the first 20 years of work, you never got offered a shift, you got a phone call telling you you were shifting, and it all happened within a fortnight."

After working at Streaky Bay for three years, Richard was transferred to Tintinara, followed by stints in Nhill, Vic, Kadina, Coonalpyn, Burra, Jamestown, Horsham, Vic, back to Jamestown, and finally, Strathalbyn, where he has been based for the past 14 years. He took on the role of branch manager at five of the postings.

"I haven't really regretted any move that I've had, it all gives you a bit of experience. Some places were better than others but it's all part of the journey," he said.

Richard remembers his time at Nhill with particular fondness, where the business used to buy and sell up to 200,000 sheep a year.

"My boss at Nhill was Ken Dickinson, who is a bit of a stalwart in the livestock industry, he had his whole life in it and was a good mentor. He was very strict but once you got his trust he was a very good teacher and an outstanding sheep person, I really learnt a lot off him," Richard said.

"I also really loved Jamestown, there is a very good community there.

You have to be adaptable and change with the times, and that is certainly easier if you can get on with the people you work with and deal with. - RICHARD SNOSWELL

"We used to take a lot of pride in the sheep market. There haven't been as many markets there in the past few years because of the droughts up north, but back in the 1990s we used to regularly have 14 or 15 pretty big sheep sales there each year."

In the late 2000s, Richard took a brief break from the stock agency business, to manage the Cygnet Park Farms aggregation on Kangaroo Island, owned by Peter Murray and Kerry Stokes.

"A lot of people have changes in their work career, and I hadn't. I thought unless I have a go at something different I'll never know, so I took the opportunity to try something new," Richard said.

"It was OK, but it wasn't quite what I wanted, and my heart was in what I had done for a long while."

"I left Strathalbyn on very good terms - the company said if I wanted to go back to them, they would see what they could do, and they were able to put me back on the same role I was on when I had left."

Looking back on his career, Richard said the people he worked with had been a major highlight.

"You have to be adaptable and change with the times, and that is certainly easier if you can get on with the people you work with and deal with," he said.

"That applies for opposition agents too, you're working in joint saleyards and it's a whole lot easier to get on with your opposition rather than be at loggerheads with them.

It will take a while to get used to, but I think it'll be nice to stop and realise that I don't have to be anywhere today, tomorrow or next week. - RICHARD SNOSWELL

"There are a lot of opposition agents that I have a lot of respect for - we realise we are competitors, but after a market we can sit down and have a beer together."

Richard said another highlight of his career was livestock prices in recent times.

"The cattle prices we've seen in the past two years have been incredible. Wool prices have taken a hit, and grain prices are back a bit, but we've had a good season this year," he said.

"I have more confidence in sheep and lamb prices holding at existing levels over the next 12 months, but I would expect cattle prices to ease off slightly in that time."

And while Richard's official involvement in the livestock industry has come to an end, he is confident that he will maintain a vested interest in the sector for years to come.

"I am so used to having a coffee at the Strath branch at 8am each morning, talking about the day before and the day ahead, and I've told the staff here not to be surprised if I'm at the gate waiting to come in at 7.45am every now and then," he said.

But with a new caravan, an interest in golf, and a combined total of 15 grandchildren between him and wife Christine, Richard knows there will be plenty to do to keep him busy in his retirement.

"I like the fact that I'll be able to go around SA and parts of Vic, and I'll know people wherever I am, or be familiar with them," he said.

"I can drive from Adelaide to Nhill, and I reckon 90 per cent of people along the main drag, I'd know.

"It will take a while to get used to, but I think it'll be nice to stop and realise that I don't have to be anywhere today, tomorrow or next week."