LOVING LIFE: Stuart Austin and wife Trisha Cowley with their children Poppy and Harry are living the regenerative agriculture dream on Wilmot, near Ebor in northern NSW.

Regenerative agriculture stirs up plenty of debate in farming circles but the ideas behind it are hardly new.

While "regenerative agriculture" is becoming more mainstream in Australia, many farmers remain to be convinced it's anything more than another fad.

Regenerative ag means different things to different people, even among its proponents, but its overriding aims are to rehabilitate topsoils, increase biodiversity and heal ecosystems damaged by two centuries of European farming practices.

The overriding belief is that restoration of soil and landscape health, partly achieved through reduced man-made inputs such as fertilisers and chemicals, will improve yields and profitability.

Regen ag farmers use practices that have been around for years including rotational grazing which seeks to mimic nature with animals intensively grazed in small paddocks for short bursts followed by long periods of pasture recovery.

This encourages pasture density and the maintenance of plant species diversity.

The maintenance of ground cover is a key principle of regen ag (and rotational grazing) which requires stock numbers to be constantly matched to feed availability so pastures don't get chewed out.

No-till farming, which has been widely adopted across cropping regions, also fits with regenerative agriculture because it minimises topsoil disturbance.

Regenerative agriculture was given a big tick of approval in a 90-page report Farm Profitability and Biodiversity which was funded by the Federal Government's National Environmental Science Program (NESP) and released in 2018. 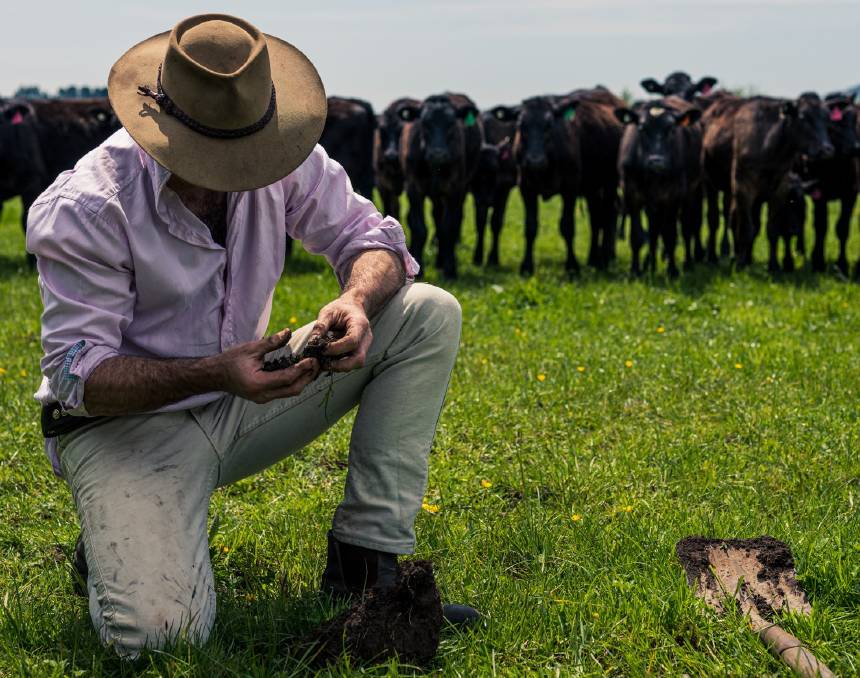 HEALTHY SOILS: Sam Trethewey checks a soil sample on his farm near Deloraine in Tasmania where regen ag methods have been adopted.

The project was headed by Sue Ogilvy from the Australian National University's Fenner School of Environment and Society.

The regenerative graziers came from the north, central and southern regions of the state and were found to be more profitable when compared with all sheep, sheep-beef and mixed farmers in similar geographic regions.

Their sense of wellbeing was also found to be higher than their conventional farming cousins.

The report's key findings were subsequently repudiated by John Francis, then a director of the NSW-based farm management consultancy Holmes Sackett (and now with Agrista). 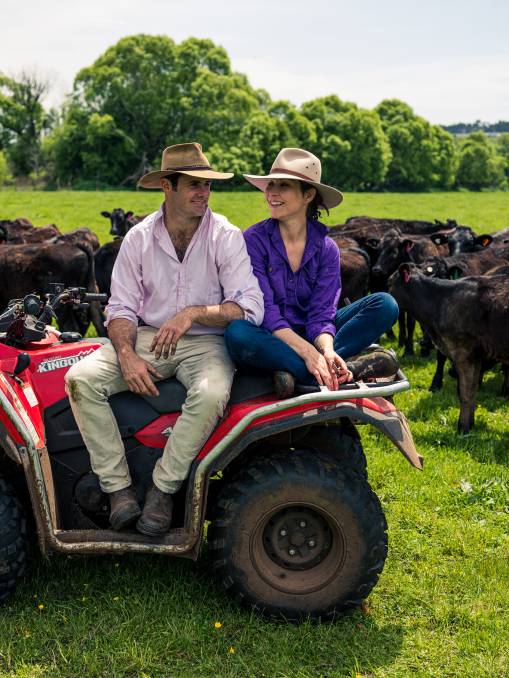 BIG ADVENTURE: Sam and Stephanie Trethewey are about to market their red Wagyu beef direct to consumers. They believe their regen ag credentials will be a good selling tool.

In his 10-page rebuttal of the NESP report, Mr Francis said analysis of 10 years of Holmes Sackett benchmarking data from 2007-16 of producers not classified as operating regenerative ag systems generated returns on assets managed of 4.22 per cent.

The group of regenerative graziers achieved only 1.66pc, he said, which equated to an average loss over the decade of $2.46 million.

Mr Francis said the NESP report had focused on the profits per dry sheep equivalent (DSE) between the two groups but had failed to quantify the differences in production and profitability.

Stuart Austin, manager of the Wilmot Cattle Company based at Ebor in northern NSW, is a keen advocate of regen ag but steers away from divisive debates about whether it's better than traditional farming.

He discussed Wilmot's switch to regen ag during a recent webinar hosted by MaiaGrazing and said the reason he spoke publicly about the practice was to make other producers aware there was another, and perhaps better, way of farming.

He said the principles of regen ag went a long way towards taking the risk out of livestock businesses where success revolved around managing grass, livestock and money.

The ongoing debate during the recent long drought had been whether to feed cattle or destock.

"If you start feeding cattle, there is no end in sight," he said.

Mr Austin believed constant financial risk and pressure was the cause of a lot of mental health issues among farmers.

He has also been open about his own past battles with mental health issues.

Another speaker on the MaiaGrazing webinar, Stephanie Trethewey, a Tasmanian red Wagyu beef producer and former television journalist, said regen ag was a "ground up" movement whose principles and practices were based on the "old way of doing things".

She and husband, Sam, have bought a farm near Deloraine where they have established the Tasmanian Agricultural Company and are about to market their beef direct to consumers.

Ms Trethewey said sustainable production was no longer enough and had coined the phrase "beyond sustainable" to describe their philosophy on beef production and holistic property management.

She said while everyone might have different opinions about regen ag, she and her husband believed in the system.

The Tretheweys don't use pesticides, plant a large mix of pasture and crop species (to mimic a more natural ecosystem) which are managed through time-controlled rotational grazing.

"Regen ag comes back to soil health. It's a niche but it will grow," she said.

The story Is 'regen ag' a fad or the future of farming? first appeared on Farm Online.