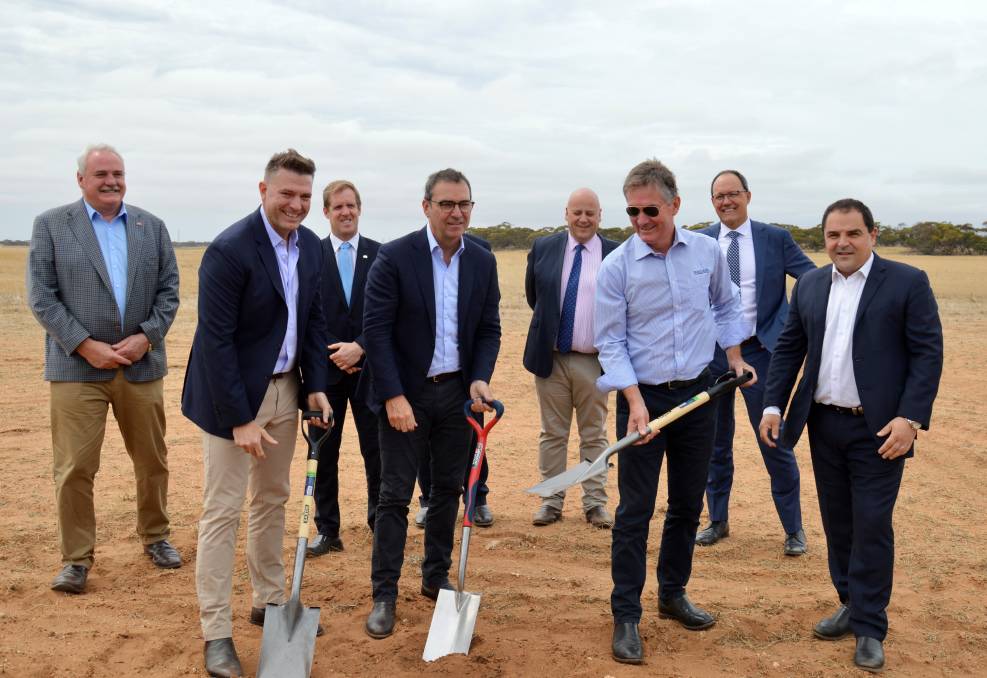 WORK has begun on the rebuild of the Thomas Foods International processing plant at Murray Bridge.

WORK has begun on the rebuild of the Thomas Foods International processing plant at Murray Bridge.

The official sod turning event marked the start of building works on the greenfield site that will be transformed into a world-class meat processing facility.

TFI chief executive Darren Thomas was joined by SA Premier Steven Marshall, along with other state, federal and local community leaders, at the event held less than three years after the devastating Murray Bridge plant fire.

Mr Thomas said the property approximately 10 kilometres outside of the town centre was the ideal location for the new flagship facility of Australia's largest 100 per cent family-owned meat processing company.

"Our company made a commitment on day one of the fire to rebuild," he said.

"We said we'd come back bigger, better and stronger.

"Since then, we've focused on fulfilling that promise.

"We've faced droughts and a global pandemic along the way but we've persevered and maintained a positive outlook."

An artists impression of the aerial view of the completed project.

Mr Thomas said their goal was for the new site to be "the most advanced multi-species meat processing facility of its kind in Australia, if not the world".

"It will service our global operations for decades to come," he said.

But he said the significant investment - the largest in the company's history - was only possible with support from staff, suppliers, customers, political leaders and the local community.

"Today is an exciting and humbling occasion," he said.

"We can't wait to see it all begin to take shape."

Mr Marshall said this was a huge step towards creating more jobs for South Australians as well as strengthening SA's meat exports, which will have a significant impact on the state's economy.

"In addition to the massive influx of jobs for the state - the estimated gross production impact of developing an expanded new plant on a Greenfield site will increase gross state product by an estimated $1.05 billion over the first 10 years of its operation," he said.

"The new plant will ultimately grow our meat exports into the future, which is a crucial pillar of SA's food, wine and agribusiness sector."

Infrastructure and Transport Minister Corey Wingard said the government was proud to contribute to public roadworks leading to the new facility.

He said they had worked closely with the Rural City of Murray Bridge and the Commonwealth to complete the link road between Mannum Road and the new plant.

"The new $14 million access road will help facilitate TFI's massive private investment in our state which will support our economy and local jobs," he said.

Last month SA's largest private commercial contractor and one of Australia's largest privately-owned builders, BADGE, was appointed to undertake the design and construction of Stage One of this highly anticipated project.

Stage one includes development of the company's beef processing facilities, to hold an initial capacity of up to 600 head a day.

Construction and commissioning of Stage One is expected to be completed across the next two years.

The exact timing of the subsequent stages of the development is yet to be determined but will include the addition of smallstock (sheep and lambs) processing facilities and further expansion of the beef facilities in order to take the plant's total processing capacity to 1200 head of beef and 15,000 head of smallstock a day.

In total, the project is expected to create more than 2000 jobs, once fully operational, with an estimated 500 required for the initial stage of production.