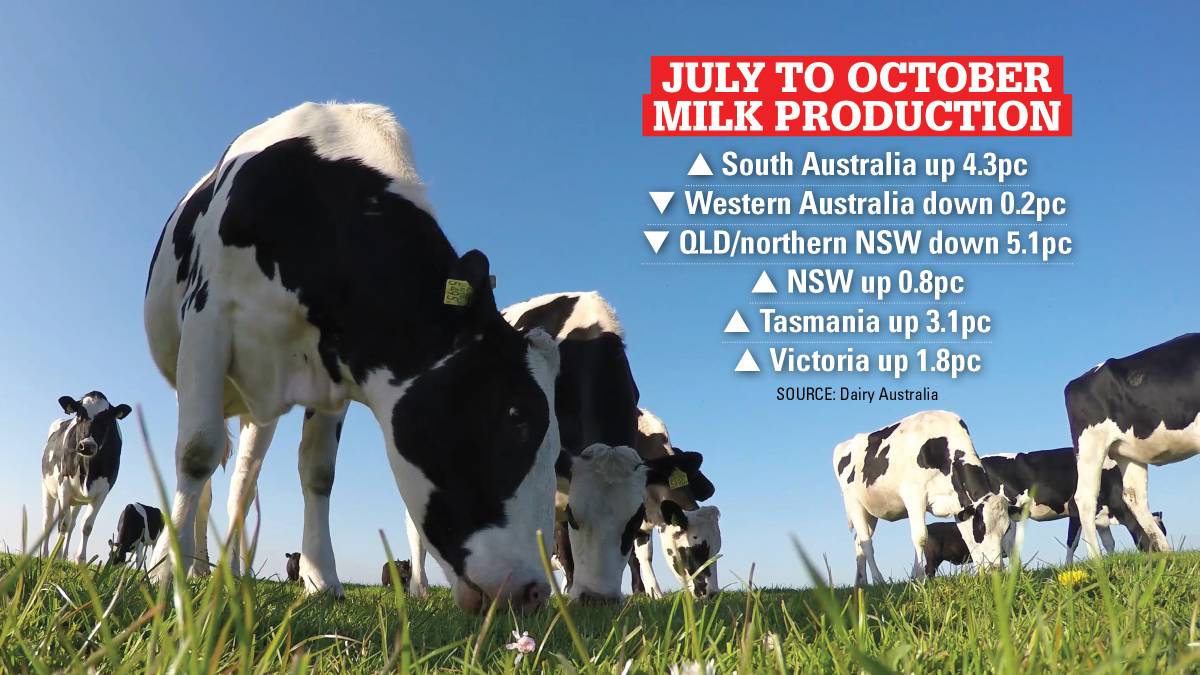 The turning tide is yet to deliver significant lifts in milk production, with constraints such as labour, debt reduction and uneasiness about pandemic uncertainties and relations with China holding back growth.

National milk production will likely lift in the 2020/21 season, for the first time in three years, but at the moment it is tracking towards the bottom end of Dairy Australia's forecast range of 1 to 3 per cent growth.

December's Situation and Outlook from the big dairy services body shows production growth has been greatest in South Australia, western Victoria and Tasmania but is still in the negative range for most other regions.

Still, industry analysts are saying this season will be one of the best for the dairy sector in many years and while good rainfall is key to that, elevated retail sales is contributing in no small measure.

The report describes how the easing of COVID-19 restrictions has "unleashed months of pent-up consumer demand" and seen food service sales rebound since spring.

Sales of milk and butter grew 4.6 and 8.7 per cent respectively in the year-to-November. Consumers have, however, shifted to buying larger pack sizes, usually priced at a discount.

"Australian dairy is fresh, it is nutritious and it is a product that we are all very proud of," he said.

If the plan was successful, it would result in substantial re-investment on-farm, he said.

Prominent milk producer and former MLC Rob Brokenshire, who with wife Mandy and son Nick milks 400 Jerseys at Mt Compass on the Fleurieu Peninsula, said there had been a concerted effort by state government and industry groups to grow the industry.

The development of a five-year dairy plan had instilled in both farmers and processors a sense of collaboration and optimism for the future of their industry, he said.

"There is also more confidence among producers now because we have access to a broader range of processors," Mr Brokenshire said.

"New players, like Beston Foods, have entered the marketplace, along with boutique dairy processors, and other processors have been expanding.

"This year, processors coming out of blocks early with farmgate price rises put pressure on others and alerted farmers there will be demand for milk and good competition for it."

Farmgate milk prices have been rising for the past two years in SA, to the tune of around 20pc.

Mr Brokenshire said energy costs were still on the rise but 2020 had delivered a significant reduction in grain and hay prices. Hay has dropped by more than 50pc and barley is back $60 a tonne.

"SA has always been in a really good position to expand its dairy sector because of access to plentiful and affordable hay and grain but we've needed other things to align and now they are starting to," Mr Brokenshire said.

"The message to the wider dairy industry is we have to be working collaboratively. If the whole chain pulls together, we get the best result and that's where SA is going now."

In Victoria, production has lifted the most in the western areas, followed by Gippsland.

But farm exits are still a significant challenge. DA's report says preliminary data is showing around 11pc of dairy farmers in Victoria chose not to renew their licence for the 2020/21 season. This compares to the long term trend of 4pc and is even higher than the rate of exits in 2018/19.

While exits can represent both consolidations and the removal of productive capacity, DA says that figure will no doubt put an upper limit on milk production growth for this and future seasons.

A key battle this season for many milk producers, along with farmers across agriculture, is labour.

With closed national borders, the pool of international workers, both skilled and casual 'working holiday' staff, has dried up, the DA report said.

"Unfortunately, we don't see that changing any time soon," he said.

"But ADF has had some policy wins over the past couple of years in this area. We lobbied the federal government to change the Dairy Industry Labour Agreement to allow skilled migrants working on dairy farms to apply for permanent residency."

Strong Chinese demand has underpinned the global dairy scene this year and for the first time since 2014, milk production in the four largest dairy exporting regions increased for more than four months in a row, the DA report said.

The time could be ripe to shift our gaze to Indonesia, Victorian-based global meat and dairy supplier Ausfine Foods International says.

Speaking in a DA podcast, Ausfine's operations director Garry Embleton said Indonesia had always been a market for Australian dairy but the emergence of China, combined with some of the difficulties of doing business in Jakarta, had made it a lower priority for exporters who had a choice.

He said his company made a conscious choice.around seven years ago, "not to join the China pile-on" and look more to Indonesia.

It's a market with plenty of potential - nearly 300m people, a growing middle class and an increasing appetite for western-style food.

"While Australia has ignored this market, the Europeans and Americans have gone in in a big way," Mr Embleton said.

Skim milk powder was the biggest product by volume going into Indonesia but cheese was a big growth item, Mr Embleton said.

Australia could certainly compete on quality and specification grounds and price competition was no better or worse than any other part of South East Asia, he said.

The story Stars aligning for dairy but it's not flowing through to more milk yet first appeared on Farm Online.