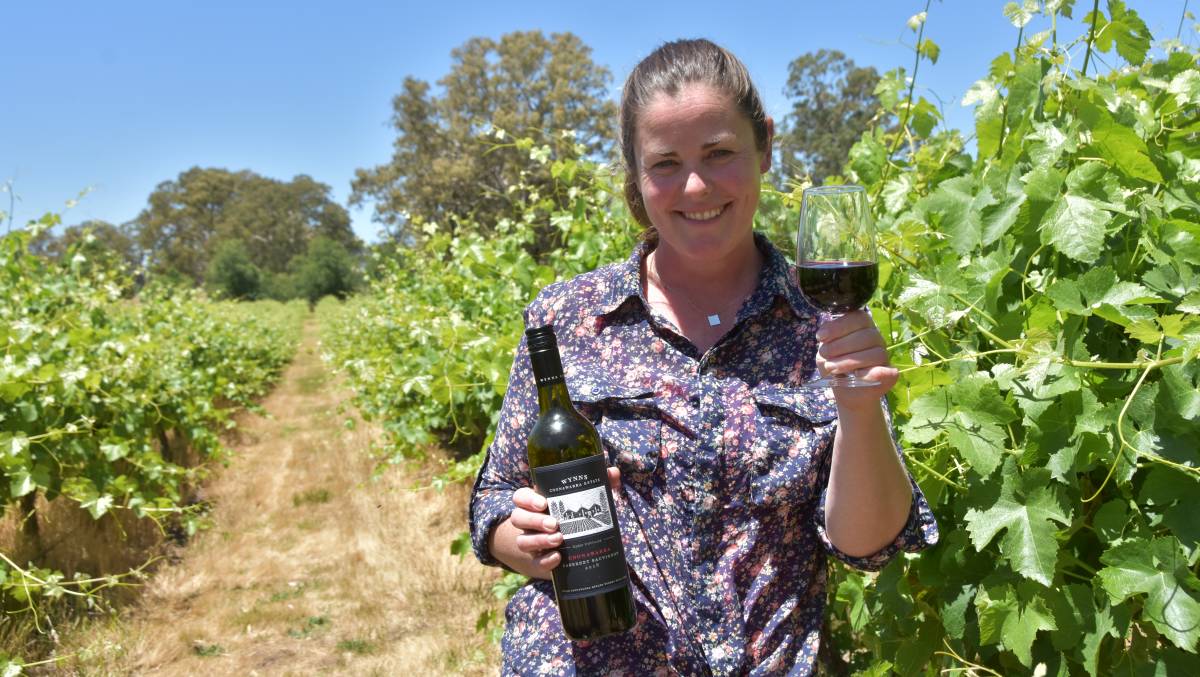 Coonawarra viticulturist Catherine Kidman often likens her role to that of a conductor in an orchestra needing to bring together many elements in harmony to make a good quality vintage.

Coonawarra viticulturist Catherine Kidman often likens her role to that of a conductor in an orchestra needing to bring together many elements in harmony to make a good quality vintage.

But if not for stumbling across a Bachelor of Viticulture course advertised while she was in year 12, she may have gone further with her classical music training or completed an arts degree.

Some 20 years later she is thankful for that serendipitous moment.

She loves spending her days walking up and down rows of vineyards checking for signs from Mother Nature about the vines' health or utilising the latest technology to monitor them.

Her scientific approach to grow grapes more sustainably has seen her recognised this year with two major awards - Gourmet Traveller's Viticulturist of the Year, as well as the same accolade in last month's Australian Women in Wine awards.

"It was a big shock but it is nice to know that some of the research that we are doing at Wynns Coonawarra is being recognised," she said.

"It is a lovely testament to the Wynns team really, who are growing exceptional fruit and making world class wine and I'm very humbled to play my part in this."

Catherine hopes she can encourage other young people, particularly women, to consider viticulture as a career and says she is proof it is achievable from a non-agricultural background.

"Don't be pigeon-holed by what you think viticulture is," she said. "There is a huge opportunity and it is really satisfying to work in the environment and feel like you are contributing to a more sustainable future."

Growing up in the Vic Dandenong Ranges, she says she was always interested in flowers and plants, but in year 12 wasn't really sure what path to choose being from a strong music and humanities background.

Her career direction was cemented when she began a Bachelor of Viticulture at La Trobe University.

"I remember my sister saying to me at the time that I had seen the course, 'You do know what viticulture is, you are working with wine and plants', to my reply 'Yes and it sounds like fun!'"

I was really drawn to that whole uncharted territory that research offers, exploring new concepts to try to understand the complexities of vines and vineyards. - CATHERINE KIDMAN, Wynns viticulturist

Catherine says she had to work hard at university but loved the logic of science, along with the wine tasting subjects.

She completed her honours at the CSIRO's Merbein Research Centre near Mildura, Vic.

"I was really drawn to that whole uncharted territory that research offers, exploring new concepts to try to understand the complexities of vines and vineyards," she said.

Her honours research involved seeing if plant hormones, namely auxins and gibberellins, could "rescue" Arabidopsis thaliana plants with reduced seed set which have similar genes to those in the flowering and fruitset of grapevines.

After graduating in 2004, she moved to the Limestone Coast, working as a viticultural agronomist.

In 2007, she took up a role in Adelaide with the Phylloxera Board (now Vine Health Australia), which included understanding the characteristics of vine rootstocks, including their drought tolerance.

"In 2008 we were just coming off the Millennium Drought and I remember driving up to the Barossa and being in a room when the then-Water Minister Karlene Maywald would regularly announce the cuts to the Murray-Darling Basin," she said.

"Growers would be listening and then say, 'How are we going to do this?'"

Out of this the Phylloxera Board began a trial at the Nuriootpa Research Centre to determine just how drought-tolerant the available rootstocks were and what physiological effects this would have on the vines in the short and medium term.

Realising it was a far bigger project, she began a PhD on the topic with SARDI research scientist Mike McCarthy and the University of Adelaide's Peter Dry and Cassandra Collins as her supervisors, revisiting the topic of flowering and fruitset as affect by both rootstocks and drought.

At the time, rootstock studies were largely based on European and United States experiences, but the project was able to identify that certain rootstocks species were fairing better than others when faced with reduced water supply under Australian conditions.

The drought trial setup is still in existence at the Nuriootpa Research Station.

In 2010, after completing her tenure with the Phylloxera Board, Catherine moved back to Coonawarra to finish writing up her PhD, and was contracted by Wynns to monitor the water status of their vines through summer.

About a year later she joined the Wynns team, which oversees about 500 hectares of vines, including the oldest cabernet sauvignon block in Coonawarra.

She says she has been fortunate the team all have a shared vision to find ways to reduce water use without compromising fruit quality.

Catherine has maintained her links with the University of Adelaide, supervising masters and PhD candidates in viticulture and winemaking and regularly working with researchers, including Vinay Pagay, who has invented infrared cameras that sit in the vineyard canopy constantly logging the canopy temperature throughout the season.

"Soil moisture is an integral tool and we will probably always use it, but there is also a lag phase associated with soil moisture monitoring and with vines we need to catch them before they go into a state of stress, so we need real-time tools that actually ask the vine how thirsty it is today," she said.

"This is especially the case with Cabernet Sauvignon, it seems to have a memory so if it gets into that zone of stress it is hard to recover and you can quite dramatically change the fruit flavours in the resultant wines-, ultimately, we want to use the irrigation so the wine reflects the terroir and vintage it is made from."