GROWN just a stone's throw from Minlaton brewery Watsacowie, malting barley from the Glazbrook family is going from paddock to pint glass in an aim to showcase a local product made from local ingredients. 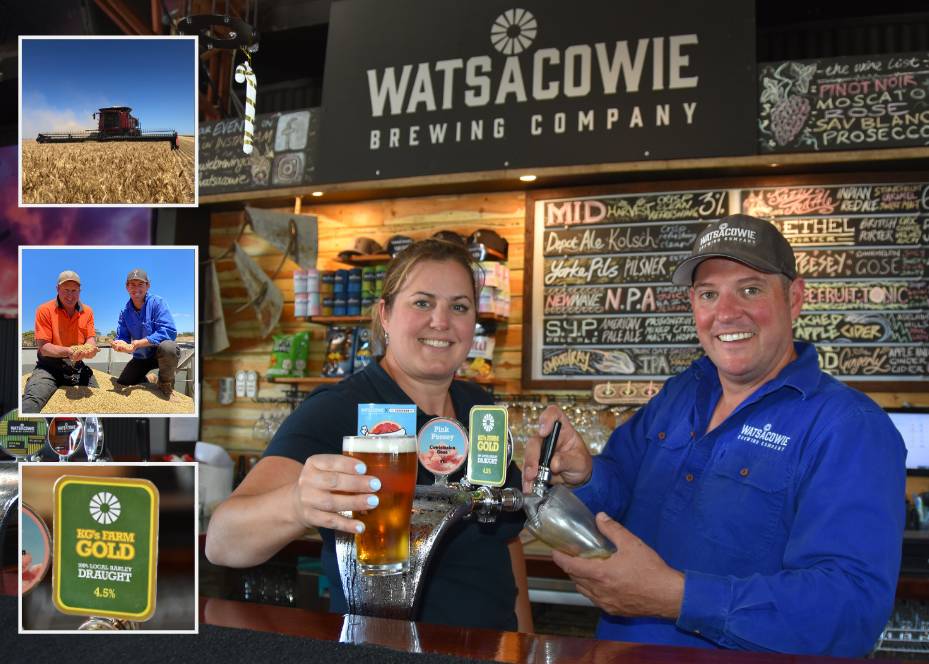 GROWN just a stone's throw from Minlaton brewery Watsacowie, malting barley from the Glazbrook family is going from paddock to pint glass in an aim to showcase a local product made from local ingredients.

The entrepreneurial pair of brewery owners Brendan and Roxanne Phasey and enthusiastic farming families on the Yorke Peninsula are teaming up to offer customers Farmers Gold, a beer brewed from 100 per cent local barley.

While the brewery, opened three years ago, is booming in popularity and already offered a wide range of ales from inventive head brewer Drew Coleman, the Phaseys said they wanted the providence of having a local product on tap.

"This area is known colloquially as the barley capital of the world because there is really good malting barley produced here," Mr Phasey said.

"No-one could really tell us why no one had ever made a single origin single malt beer from the Yorke Peninsula before and it seemed like a logical thing to do.

"From a brand perspective, we wanted to have that providence as well. It was important to us that we could have a product that showcases the local cereal."

The first family to showcase their barley in beer form was the Glazbrooks, who have deep roots in Minlaton.

They crop 1100 hectares of owned and leased land around the Peninsula's agricultural hub, growing a three-year rotation of lentils, wheat and barley.

"We bought where we are in the 1940s and the land where the brewery is was actually part of our farm once upon a time."

The first line of KG's Farm Gold was a big hit across the Peninsula, with locals lapping up the staple draught flavour which sold out in a matter of weeks.

It was named after Mr Glazbrook's late grandfather Kenneth, a well-liked and well-known personality in the district, a hard-working farmer and a goal umpiring stalwart for the local football club.

Mr Glazbrook said the idea for Farmers Gold was first discussed, fittingly, with a brew in hand.

"Minlaton and the Southern Yorke Peninsula is well-known for its high-protein malting barley and locals have been known to refer to it as the malting barley capital of the world."

"We pick out what we think is going to be the paddock with the best protein and that's what goes to the brewery."

A small batch of barley from their 2019 harvest was sent off to Barossa Valley Craft Malt for malsting, then returned to Watsacowie earlier this year for brewing.

The Glazbrooks have just finished harvesting and another batch of barley is on its way to the malster for the second run of the beer, expected inMay 2021.

It will be available on tap at the brewery, various YP hotels and potentially in cans and bottleshops once Watsacowie receives delivery of a new canning line.

Mr Phasey said another Minlaton farming family, the Litsters, have also agreed to jump on board the initiative, which requires about two tonnes of barley a year currently.

"We're lucky enough to have a group of local farmers who liked to be involved and are willing to put a little bit of malt away for us each year," he said.

"The guys that provide the malt to us are regular customers and have supported us from the start so they feel like they've got a bit of ownership of this beer as well."

A self-described passionate beer drinker and home brewer, Mr Phasey was working in IT before he and Roxanne were inspired by fellow brewers. They then decided to make the move to Minlaton to be closer to family and give professional brewing a go.

The brewery has proved immensely popular with locals and tourists alike, offering 12 beers and stouts in its core range and up to five seasonal varieties.

"We try to make a beer for every taste from very mild, approachable styles all the way up to something a bit wacky," Mr Phasey said.

"In the future we're looking at making a wholly local beer - we're currently using Australian hops but they're from outside the region."