The state's weaner sellers can expect to enjoy some record paydays in coming weeks, as interstate buyers go head-to-head with locals for the first time in several years to secure calves. 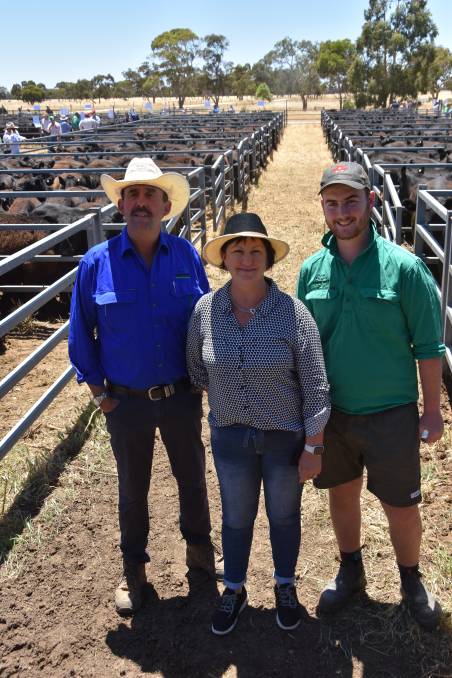 BIG BIDS: Amherst's Ian, Louise and Patrick Johnson at the circuit weaner sale, where their yearling steers sold to $2070.

The state's weaner sellers can expect to enjoy some record paydays in coming weeks, as interstate buyers go head-to-head with locals for the first time in several years to secure calves.

At the first Strathalbyn sale in months on Friday, steers topped at $1750 and on Monday at the Amherst circuit weaner sale at Willalooka, 2565 steers and heifers averaged $1616, grossing an outstanding $4.146 million.

Spence Dix & Co director and auctioneer Jono Spence said it was an unbelievable result at Amherst.

"Fortune favours the brave and there was plenty of bravery shown by buyers there."

More than 5000 steers, including many European Union-accredited calves, will go under the hammer at Naracoorte today (Thursday), followed by 1500 heifers tomorrow (Friday) in the first of its weaner sales.

Naracoorte combined agents chairman Will Nolan said vendors were likely to pocket $200 to $350 a head more than 2019, with both higher price/kg rates and more weight in calves.

He expected strong orders from NSW and Vic for the first time in a few years, but said locals with plentiful feed would also be strong.

"They can justify spending around $1000 less than they received for their previous year's purchases, so if they sold bullocks for $2500, spending $1500 to $1600 for replacements is not out of the question," he said.

Mr Nolan said the only downward pressure may come if the Naracoorte prime cattle market, which was cheaper on Tuesday, continued to fall in December.

Mount Gambier is also expecting a big yarding of up to 4000 head for its next store sale, including some top quality weaner drafts.

"North of us has been in drought for two to three years and there have been a lot of females sold off, but now they want to rebuild. We are already seeing heifers making the same money as steers, which we haven't seen before," he said.

Elders Strathalbyn branch manager Danny Reynolds said last week's store sale produced "prices never before seen" at the yards but cautioned these prices may start to recede in the next few weeks.

But he said the market was being driven by restocker demand.

"People coming out of the drought have oodles of feed but no stock and are wanting cattle to fatten up and sell in next six to 12 months," he said.

Due to the good season on the Fleurieu Peninsula Mr Reynolds said weaners would be "as good as we've ever seen" and much heavier than normal.