Nearly 5000 hectares of land was burnt in the fires that tore through the Upper South East on Thursday last week, in what many locals have described as the biggest and most ferocious fire they have ever seen in the area. 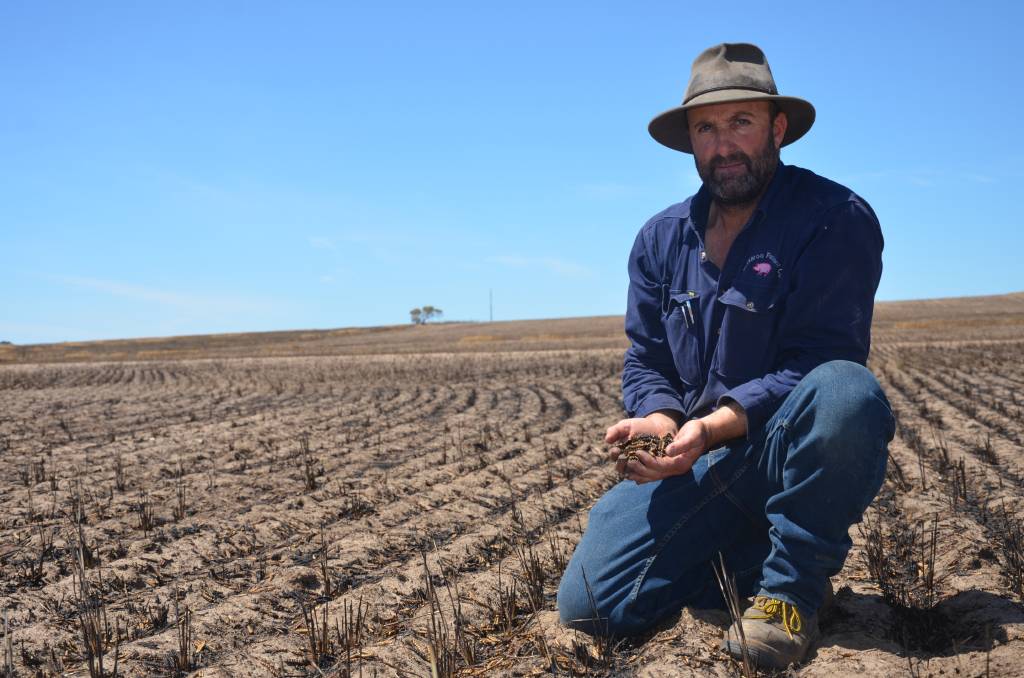 Nearly 5000 hectares of land was burnt in the fires that tore through the Upper South East on Thursday last week, in what many locals have described as the biggest and most ferocious fire they have ever seen in the area.

The fire started shortly after 2pm on November 19, breaking out on the north-east side of Ki Ki. It moved in an easterly direction, racing through 4865ha of pasture and cropping area, before being largely contained near Jabuk by 7pm.

A SA Power Networks spokesman said while the fire was suspected to have started close to electricity infrastructure, the specific cause required further investigation, which was under way.

Nearly 15 property owners were affected by the blaze, while PIRSA have reported at least 250 sheep to have perished in the fire. Two sheds and one vehicle were also lost, but fortunately all homes were saved.

"It was a massive effort to fight the fire, at one point there were six or seven farmers under direct attack," he said.

"When the fire started, there was a north-westerly wind, but then a south-westerly came through, which split the fire front into four or five fingers and we had to try to go back and save what was behind us.

"Some have said the fire was moving faster than the 2015 Pinery fire. It was just horrendous."

Nearly 100 CFS firefighters assisted in bringing the fire under control, which involved 15 tankers, three bulk water carriers and 48 water drops by the CFS fleet, dropping more than 110,000 litres. Numerous farm firefighting units were also on the scene mopping up around the fire edges.

A number of farmers were injured in the fire, with a few ending up in hospital.

The standing crops gave the fire plenty of fuel, couple that with the windy conditions, it was very hard to try to get in front of the fire to control it. - NATHANIEL LLOYD

Mr Simmons said CFS brigades and firefighting support came from as far as Port Augusta, with strike teams on watch across the weekend following the fire.

"Four rounds of strike teams meant locals were effectively relieved until Sunday, I am extremely grateful for all those people, who took the pressure off locals," he said.

Cooke Plains Nutrien Ag Solutions agronomist Nathaniel Lloyd said the majority of crops in the firing line had not yet been harvested, allowing the fire to rapidly increase in ferocity.

"The standing crops gave the fire plenty of fuel, couple that with the windy conditions, it was very hard to try to get in front of the fire to control it," he said.

Ki Ki and Coomandook farmer Matthew Ballard was one of the first to be hit by the fire front and said the size and fierceness of the fire was "unbelievable".

"We had about 400 tonnes of barley in grain bags from last year's harvest that have been damaged by the fire, but hopefully we can recover some of that. We're waiting for assessors to see what the go is there," he said.

Mr Ballard had initially intended to start harvest late last week, and after being delayed by the fire, now intends to start within the coming days.

"In a way we were lucky, we didn't have any machinery out in the paddocks," he said.

He was particularly grateful for the CFS airfleet, who helped to save building infrastructure.

So many people were willing to leave their own area on a hot and windy day, and they came such a long way and brought so much energy, I was so grateful for them coming. - LESTER CATTLE

Netherton farmers Lester and Kay Cattle said the rallying from the community to fight the fire had been "phenomenal".

"Fighting the fire was a bit like going to war, everyone had accepted the challenge of supporting each other," he said.

"So many people were willing to leave their own area on a hot and windy day, and they came such a long way and brought so much energy, I was so grateful for them coming."

More than 95 per cent of the Cattles' 1600ha property Desert Fringe was burnt, as well as 15pc of their 1800ha home property Summercorn.

Of his 500 Merino lambs, 140 perished, while another 90 are under close veterinary attention.

"We had the lambs in the safest spot in a hay stubble paddock, under a watchful eye at all times, but when the wind changed, personal safety became an issue and we had to sacrifice the sheep," he said.

"The whole district is very fire conscious and had bushfire action plans in place, hay had been cut ready for export, but it just all went up in flames.

"The whole district also lost power, which was a big problem when we were trying to pump water."

The heat is really starting to build again, with temperatures very likely to exceed 40 degrees for much of the state on Friday and Saturday. - HILARY WILSON

"At the same time, most people who were fire-affected have got various properties which are spread out, and therefore weren't completely burnt out - many were able to move stock to areas outside the fire scar," he said.

The Department of Primary Industries and Regions has appointed a recovery facilitator to work with the local council and Landscape Boards to identify recovery needs. This includes wellbeing support, soil stabilisation advice and confinement feeding information.

Farmers are urged to be on high bushfire alert again this week, with a heatwave expected in the coming days, according to Bureau of Meteorology's Hilary Wilson.

"The heat is really starting to build again, with temperatures very likely to exceed 40 degrees for much of the state on Friday and Saturday," she said.

Willalooka's Amherst circuit weaner cattle sale, originally scheduled for tomorrow, has been postponed to Monday due to the heat.