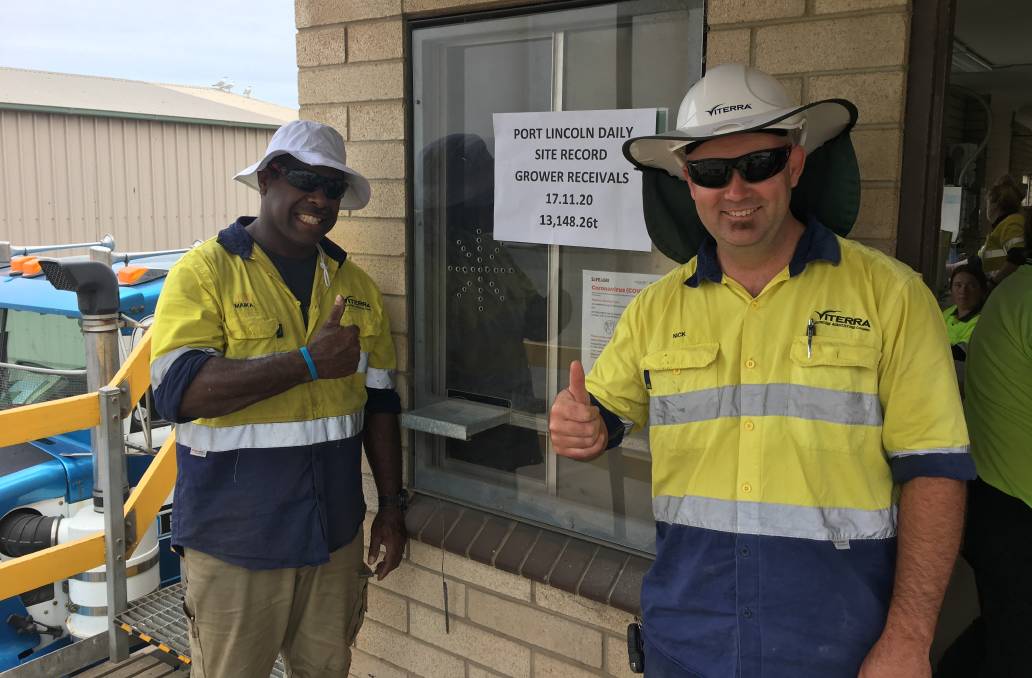 There's been a heavy focus on the NSW harvest and the massive turnaround there but there are also site records being smashed in SA.

LAST week's COVID-19 scare in South Australia did not impact the harvest, with Viterra, the state's leading grain bulk handler, reporting that many sites smashed their single day records.

The national focus has been on the bumper NSW crop but Viterra's numbers show South Australia is also enjoying a solid year of grain production.

As harvest ramped up on the back of warmer weather Viterra took a whopping 1.2 million tonnes for the week, taking total receivals over 2.6m tonnes.

Viterra operations manager Michael Hill said Wednesday, November 18 was the busiest day of a busiest week with more than 200,000 tonnes hitting the network.

The Eyre Peninsula was a standout with the busy port site at Port Lincoln smashing its daily record twice.

The previously record for the most tonnes delivered in a day at Port Lincoln was 12,889 tonnes during the record 2016/17 harvest.

But it was not just Viterra's SA network kicking goals.

Its site at Werrimull, in Victoria's Millewa in the far north-west of the state, also broke its daily receival record twice with 4,636 tonnes and 5,061 tonnes delivered on Tuesday and Wednesday.

The previous daily record for the site was also during the record 2016/17 harvest with 4,537 tonnes delivered.

This result is extra for pleasing for growers in the region, who have endured consecutive years of severe drought through 18-19 and 19-20. Trucks roll up to Viterra's site at Wudinna, on the Eyre Peninsula.

Mr Hill said it had been a year of records with Lock, in the central EP, also setting new marks earlier in the harvest.

He said he was thrilled with how the harvest was progressing, especially as both employees and carters are having to manage an extra layer of complexity with COVID-19 protocols.

"Our supply chain has adapted and continued to operate through COVID-19 restrictions and it's very pleasing to see the efforts and support of growers, carriers and employees during this time," he said.

Mr Hill said part of the ability to break records had been flexible opening hours.

With the warmer conditions, ideal for harvesting, many sites extended their opening hours.

The warmer weather has given growers the opportunity to have a good run of harvesting and with this, Viterra has extended our opening hours.