LATE rain has been a double-edged sword for pulse crops across the state, encouraging late growth but also causing disease issues in various areas. 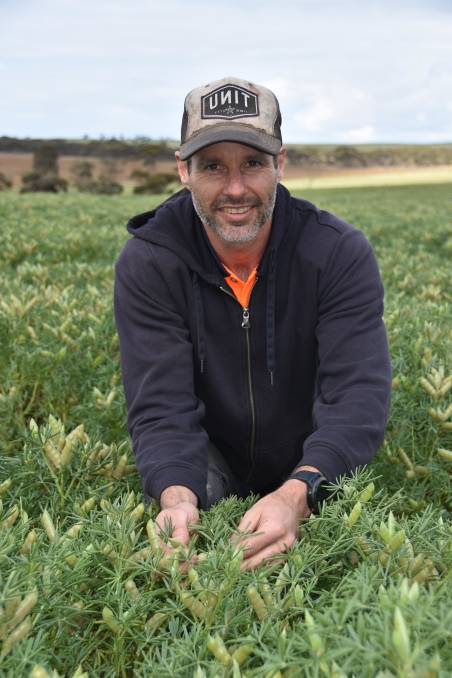 LATE rain has been a double-edged sword for pulse crops across the state, encouraging late growth but also causing disease issues in various areas.

"Pulses do most of their growing on the back end of the season, so they didn't stress out much in that dry winter period," he said.

"They can switch between vegetative and flowering stages, so they can still put on a reasonable amount of growth and pod development late in the piece."

Mr Holmes said pulse crops on the southern Yorke and Eyre peninsulas had a particularly good season, while northern areas of both regions had struggled.

Mallee growers were enjoying their best pulse-growing year since 2016.

In terms of disease, Mr Holmes said ascochyta was apparent in some lentil paddocks, which had the potential to lead to seed staining and a subsequent quality dip.

"The ascochyta problem will be paddock-dependent and only a problem in high-intensity lentil growing regions, where there is inoculum sitting round in the soil," he said.

Late-season frosts were also expected to cause some quality issues, mainly in high frost-prone regions, such as the Mid North and Upper North, with seed coat staining and wrinkling also a potential problem if rain continues to fall through harvest.

Prices are looking firm to better, with lentils fetching about $700 a tonne, chickpeas $620/t and peas and beans both at about $400/t.

Vetch leapt out of the ground early on, and I have seen some wonderful lupins and chickpeas too. I haven't seen a dud legume crop anywhere. - RICHARD SAUNDERS

Any price changes to beans would likely be dependent on demand from Egypt, which is the primary market, but Mr Holmes did not expect to see any "catastrophic price drop".

In good news for lentil growers, Mr Holmes said import tariffs to India - a major lentil market - had been reduced, down to 10 per cent until at least December 31.

Rural Directions agronomist Richard Saunders, Loxton, said most legumes in his area were "looking good", in terms of both yield and quality.

"Vetch leapt out of the ground early on, and I have seen some wonderful lupins and chickpeas too. I haven't seen a dud legume crop anywhere," he said.

Mr Saunders said grain legumes in his area usually averaged 0.6t a hectare, but this year, he expected bean yields to be 1.5-2t/ha, while lupins would likely surpass 1.5t/ha, with lentils and chickpeas expected to average 1.5t/ha.

Wynarka's Simon Martin grows a number of legumes in a 2250ha cropping operation with father Tony and cousin Sam Martin, including lupins, chickpeas and vetch.

Simon said they were considering turfing the chickpeas after this year and replacing them with faba beans, as they were not performing on their rockier country.

The lupins, however, were some of the best they had ever grown.

"We can often have germination challenges on the non-wetting sands, but not this year," he said.

The Martins started harvest in early November on barley then canola. They expect to be harvesting the lupins by the end of this month.

On the EP, Rural Traders agronomist Marty Lovegrove, Cleve, said there had been an "unprecedented" area sown to faba beans, driven by good prices last year.

But a lack of rainfall meant pulse yields overall would likely be at or below average.

"Those who grow beans are generally in more reliable parts of our district, up in the Gum Flat area in the Cleve hills, where they've had a better run with the season," he said.