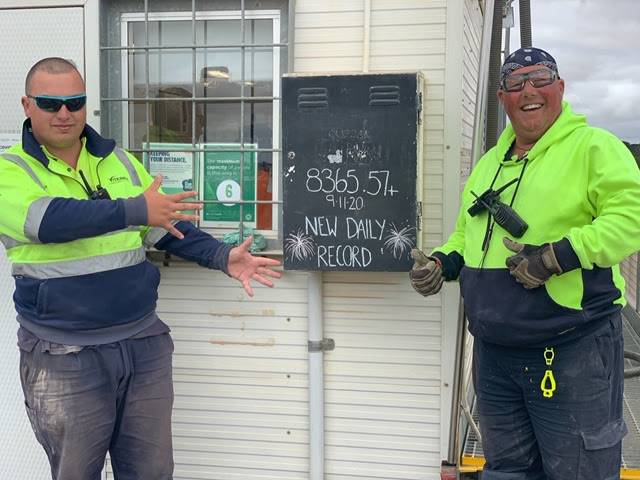 HARVEST is ramping up across the state, with a Viterra site on the Eyre Peninsula breaking its daily receival record and the company taking more than 680,000 tonnes into its sites last week.

HARVEST is ramping up across the state, with a Viterra site on the Eyre Peninsula breaking its daily receival record and the company taking more than 680,000 tonnes into its sites last week.

Viterra's Lock site had 8365t delivered on November 9, with the previous record of 7926t during the 2016/17 record harvest smashed.

Local grower Lindsay Matthews delivered the load that broke the record from his Koomaview property, east of Kyancutta, on behalf of his family business run with son Wesley and his wife Karen.

The load of wheat was then upgraded through dynamic binning.

Viterra received more than 680,000t into its sites last week, taking its total receivals for the harvest to more than 1.3 million tonnes.

Monday last week was the busiest day of the season, with deliveries into sites reaching nearly 180,000t.

"Our employees are an asset to our business and it is a credit to them for managing the busiest receival day on record, particularly early on into harvest," he said.

"It's been fantastic to see the level of support we've had from growers and carriers, and we congratulate them on breaking the record and their efforts at site which have helped operations run smoothly.

"We have been working hard to ensure growers are being turned around as quickly as possible so they can get their crops off.

"We've received great feedback on our flexible opening hours which we've extended until late when they've needed it.

"Backed by our large workforce, we're able to quickly adapt to growers' changing needs and run double shifts to remain open, while ensuring the safety of our employees, grower customers and communities."

"We received nearly 260,000 tonnes last week with the majority of activity in the region on the Yorke Peninsula and Mid North," he said.

"Our Gladstone and Booleroo Centre sites picked up, with barley making up the majority of deliveries. Meanwhile, in the north of the region wheat deliveries are increasing as barley slows.

"In the Eastern region, ten sites are now receiving grain after our Keith site welcomed its first load for the season on Tuesday with a load of barley."

Viterra Eastern Region operations manager Jo Klitscher said the weather slowed deliveries into the site for the rest of the week.

"Cold and wet weather in the South East of the region has pushed back the start of harvest," she said.

"Growers are hoping the weather will improve so they can get things going.

"The weather was better for other areas in the region and we saw deliveries into sites such as Tailem Bend ramp up last week.

"We are seeing strong deliveries of lentils into sites and are commencing outturns to ensure there is space for growers to deliver."