SA's shearer workforce is on the decline, making up just 14 per cent of the nation's total, so when COVID-19 restrictions put a halt on interstate and overseas shearers arriving during the peak season, some sheep producers were left in limbo. 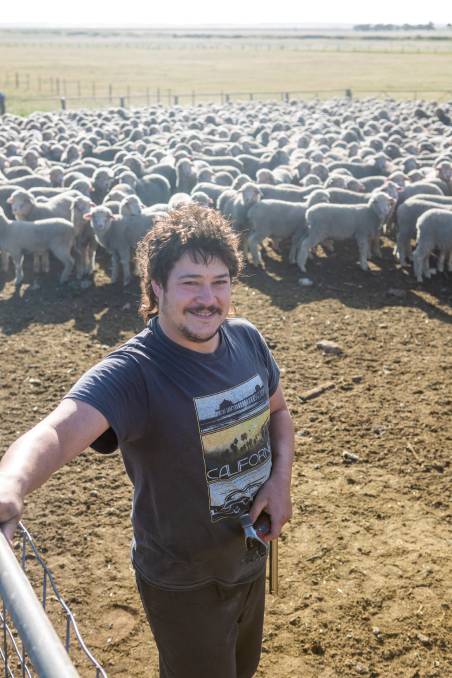 SE SWITCH: New Zealand shearer Aaron Bell moved to Willalooka two years ago and was thankful he did not have to worry about getting through "red tape" to get to Australia for this year's shearing season.

SA's shearer workforce is on the decline, making up just 14 per cent of the nation's total, so when COVID-19 restrictions put a halt on interstate and overseas shearers arriving during the peak season, some sheep producers were left in limbo.

Many producers rely heavily on New Zealand and eastern states shearers to get sheep shorn before the start of harvest or flystrike season but with limited shearers available, programs have been delayed by up to a month.

Shearing Contractors Association of Australia secretary Jason Letchford said the shortage was the "worst" in his lifetime.

"The stories we are hearing about shortages and sheep not being shorn are worse than we envisioned," he said.

Mr Letchford said many sheep would be shorn "very late".

"The main concern at the moment is not just having such a deficit in shearer numbers, but also the commercial value of the wool is in jeopardy," he said.

Mr Letchford said flystrike and grass seed-impacted fleeces would be a reality this season.

"The shortage will come at a significant cost for farm enterprises," he said.

"In the South East, they employ a significant amount of NZ shearers - those guys will be vulnerable with having such a late start to shearing."

Greenpatch farmer Mark Modra began counting the costs of a late start and made plans to sell about 800 lambs after being told there would be a six-week wait until lambs could be shorn.

"By the time the shearers would arrive we would be looking at damaged fleeces from grass seeds and flystrike - as well as interrupt harvest dramatically," he said.

But concerned that lamb prices were too low, Mr Modra re-evaluated a potential sell-off after not being willing to take another hit to the bottom line.

"We usually shear lambs at weaning in September/October but now I am going to use a backline treatment and hold onto them until the end of harvest," he said.

"It is a gamble and fleeces will most likely have quality issues."

But, retired and young Eyre Peninsula shearers have helped to fill the shortage across the region, according to Elders district wool manager Claire Loveridge.

"New Zealand and Qld shearers did not arrive and it has put most farmers back by three to four weeks," she said.

"So the contractors are just not able to fill the shortages, but it is not all doom and gloom."

Ms Loveridge said considering the statewide issue, the EP was lucky to have a local base of shearers to get the job done.

"We got away with it lightly," she said.

ABOUT 500 New Zealand shearers usually arrive in Australia each year, but since COVID-19 halted international travel, the pressure on local shearing teams to fill the gap has been unprecedented.

"When shearers were finally given the green light to come to Australia for the season, even if they wanted to, there were no flights for six weeks and flights were only to Sydney," he said.

"The initial plan was to fly into NSW and work for two weeks and then come into SA without needing to quarantine."

But, Mr Letchford said SA's season had been pushed back too far because flight delays meant NZ shearers had not arrived.

"By the time the shearers would have arrived, they would not have been able to stay for the entire season because it was knocking into the peak shearing period in NZ," he said.

NZ shearer Aaron Bell has travelled to the South East since 2013 and decided to move to SA permanently two years ago.

"In the past I would come here to shear for SE farmers and then go to the United Kingdom to shear," he said.

"But, COVID-19 restrictions have meant shearer numbers are down across the whole world because of it.

"The work in SA would have generally dried up by now but because of a lack of shearers, I have work until May next year."