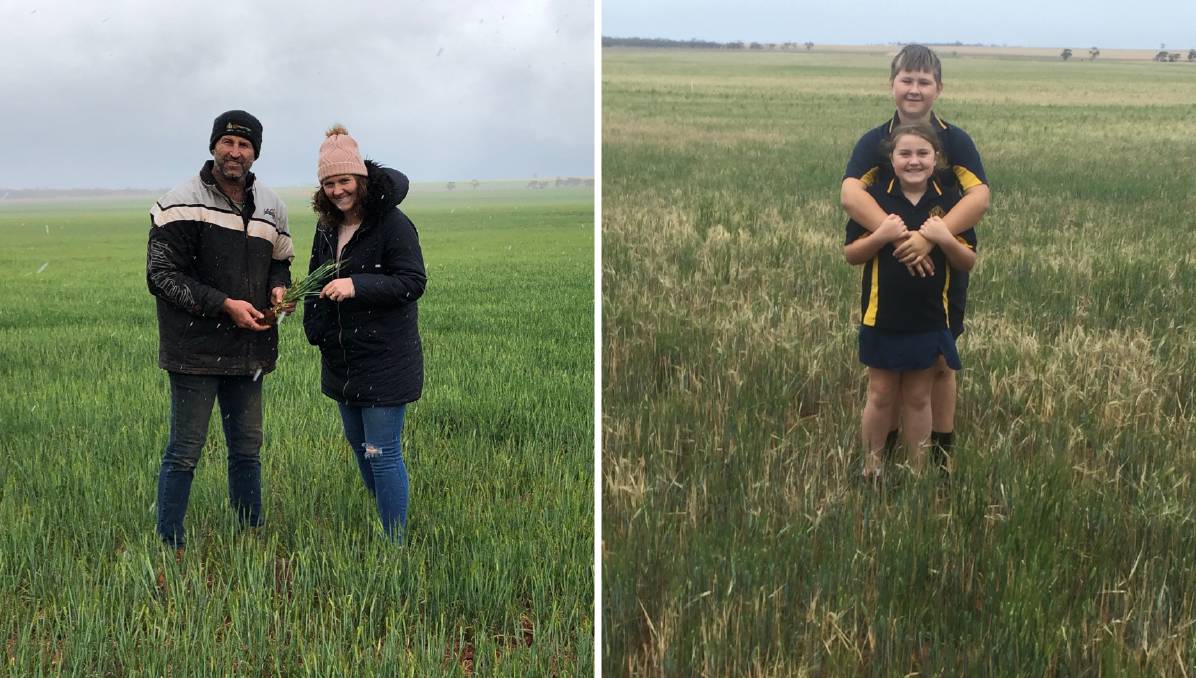 REGENERATIVE RESEARCH: (Left) Brett and Ellen Zibell, Buckleboo, in their regenerative agriculture trial plot of barley in August. (Right) James and Esther Zibell in the same plot in early November.

TWO bouts of timely rain have helped boost the fortunes of the first year of a four-year regenerative agriculture trial on upper Eyre Peninsula, along with other crops on-farm.

TWO bouts of timely rain have helped boost the fortunes of the first year of a four-year regenerative agriculture trial on upper Eyre Peninsula, along with other crops on-farm.

Buckleboo farmers Brett and Ellen Zibell, who farm a collective 7500 hectares with Brett's brother Mark and his wife Lisa, are one-quarter of the way through a "full-paddock trial", looking to lift their soil carbon, which is being run with the support of EP Landscapes SA.

The 37ha barley crop was sown on April 16, and is expected to be harvested at the end of this month, and compares a number of different applications. These include the use of a Nutrisoil 'worm juice' and seed coatings.

"We have done soil carbon tests and then after the four-year trial, will see what the final result is," Ms Zibell said.

Ms Zibell said the goal of the trial was not to chase higher yields, but to improve the entire ecosystem, which should, in-turn, help their productivity.

They expected to harvest the trial in the coming weeks, which should give some preliminary comparisons on the different approaches, but the full trial results - particularly the soil carbon levels - could take several years to uncover.

Ms Zibell said the crop, and the season, had been looking very dry until August, when they finally got some regular rains.

They then had a dry September before October brought back some moisture.

"We ended up with nearly our annual average for the year (in October)," she said.

"The season has been better than we expected in July."

Harvest was delayed as a result of the wet October, with them starting early this month.

Next year, they expect the paddock will be used to grow a mixed species pasture as they strive for the tenets of reduced soil disturbance, increased plant diversity, stronger root systems and improved soil cover.

Ms Zibell believed they already covered a lot of the basics of regenerative agriculture, while still largely performing "district practice", but she wanted to ensure they had the soil in its best condition.

IT WAS the "year of the pest" for several regions on Eyre Peninsula this growing season, with a number of insects making their presence known, according to Cleve Rural Traders agronomist Geoff Rissmann.

While the dry June and July meant many growers cut back on inputs, he said there were "plenty of reasons to be checking paddocks", with heliothis in pulses, diamondback moths in canola and Russian wheat aphids causing concern.

Mr Rissmann said the season in his area had got off to a somewhat good start, with rains near seeding time, albeit off a dry summer.

"We had enough rain for even establishment for most farmers, except on the sandy soils," he said.

"Then it didn't rain at all in June and July, but decent rain in August saved everyone's bacon."

Mr Rissmann said this year had "certainly a bit more hope in harvest", with some growers likely to have "well and truly average or above" yields, while others could be below average.

He said late-sown crops had particularly benefited from October rains, even as it created a haphazard start to harvest.

Pests have also been an issue in the Cummins region, alongside the more unusual incidences of frost.

He said later-sown crops were most affected, but with little demand for hay, some growers had elected not to cut for hay and were instead waiting for harvest to see the impact.

As well as heliothis and moths, mice baiting was also up, he said.

Mr Hebner said this season had been a "mixed bag", with good rain at the start of season, but it "ran out of moisture in September".

Further east at Elliston, the situation has been a little more "standard" - albeit with some dry spots in between, WCT Elliston manager Christian Faulkner said.

He anticipates an average crop, with some variation in the district. Sudden temperature spikes in September could have an impact.

"In general, people should be happy - as long as rain doesn't spoil the harvest," he said.