Those who drink cordial generally dilute it without question, and Cleve cropper Ben Ranford, Bermondsey Park, believes the same idea should stand for fertiliser applications. 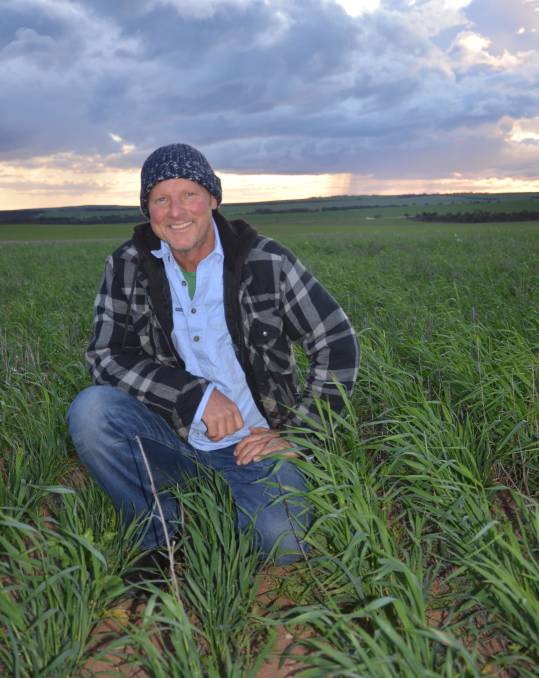 Those who drink cordial generally dilute it without question, and Cleve cropper Ben Ranford, Bermondsey Park, believes the same idea should stand for fertiliser applications.

Along with wife Kathy and workman Graeme Dolphin, Mr Ranford crops 3000 hectares of wheat, barley, canola, lentils, peas and vetch, having moved out of livestock in 2017 to focus all of his efforts on cropping and regenerative agriculture.

Mr Ranford has traditionally used high analysis granular fertilisers in the past, but now produces his own 'biofert'. Biofert is a natural fertiliser, created through a natural biological process whereby inorganic minerals are fermented using microbes in the rumen of a freshly-slaughtered cow.

Rumen would otherwise be a waste product of cattle processing.

"You're harnessing those exact microbes that turn grass into manure - you're feeding them up with molasses and milk, adding nutrients, and the microbes digest those nutrients into amino acids," Mr Ranford said.

"You end up with lower concentrations of everything, but the fertiliser is in a really plant-friendly and available form, containing all the trace elements you need."

While the nutrients produced are vital for plant health, Mr Ranford said the number one aim of biofert use was to generate good soil biological activity.

"Biofert is about feeding the biology in the soil, that biology is what is working with plant roots, and they feed off each other," he said.

"If you boost the soil biology, you don't need to worry about feeding the plant, because plant root biology and soil biology have evolved to complement each other."

If the soils are much healthier, and yields aren't compromised, then the use of biofert is already worth it. - BEN RANFORD

As well as biofert, Mr Ranford is using a MAP/sulphate of ammonia blend applied at 40 kilograms/ha, but intends to phase that out as the soil biological activity "ramps up".

"The MAP/SOA blend isn't ideal as far as soil biology goes, but I buffer it with 5 per cent powdered humate, which coats the fertiliser granules for a more stable and slower release, so it isn't leaching or force-feeding the plants," he said.

This year, the biofert was applied at seeding time, to the entire cropping program, at 20 litres/ha, with two foliar applications at the tillering and flag leaf emergence stages, at 5L/ha each.

"Those two plant stages are pretty well accepted as the two yield maximising times - you want to build yield early but also sustain potential made," he said.

Having made 70,000L of biofert for this year's crop, Mr Ranford plans to make 150,000L during summer for next year's crop, allowing him to increase the application rates to 30L/ha applied at seeding, and two foliar applications at 10L/ha each.

Fertiliser companies also offer products similar to his own biofert.

Yields have been on par with other croppers in the area in the past few seasons, but Mr Ranford said tough seasons and little soil moisture made it difficult to quantify the true yield potential of biofert use.

"If the soils are much healthier, and yields aren't compromised, then the use of biofert is already worth it," he said.

While Mr Ranford said he had been embracing regenerative agriculture practices for the past few years, he expected the practices to "take off" in the coming decade.

"In the four years I've been in the orbit of working towards it, I can already see many more companies and professionals offering more advice and products about regenerative agriculture, it's starting to gain traction," he said.

"I'll be surprised if in another ten years time, what sounds a bit out there now, will be part of the norm, and part of the standard approach if you're a farmer."

CLEVE cropper Ben Ranford did not like his soils remaining largely inactive and exposed during summer, and made the decision to sow sunflowers and millet as cover crops.

"If you grow these plants, you keep the soil cool, the roots are exuding nutrients and sugars and pumping carbon into soil. All of that is building up biology in the soil and priming the soil for when you put the winter crop in," Mr Ranford said.

"Sunflowers and millet have complementary architectures, so they intercept the sun and shade the ground beautifully together, and in the soil they complement each other too."

He sows sunflowers at two kilograms a hectare, and millet at 5kg/ha, sown together into the same paddock, working out at about $15/ha for seed. Seeding takes place the morning after the winter crop is harvested.

Most of the things you associate with going seeding full on, don't apply, you just jump on the header, and go. - BEN RANFORD

"Apparently there is a wicking effect - as soon as you harvest the crop, if there is residual moisture in the soil, it gets drawn to the surface," Mr Ranford said.

"So, if you put the seeds in the seed zone straightaway, it's more likely that if there is moisture there, you'll get the boost for seed germination."

Mr Ranford said it was "no hassle" to sow the summer crops, even during the busy harvest period.

"You can sow more than 400ha with one fill of grain, and you're going 14 kilometres an hour, it doesn't take long to do it."

"Most of the things you associate with going seeding full on, don't apply, you just jump on the header, and go.

Sunflowers and millet can also be sown if a winter crop is terminated, providing the soil temperature is at least 16 degrees Celsius. The cover crop is terminated at the end of the vegetative stage, before plants start drawing nutrients out of the soil.

"When I was sowing the cover crops for the first time in late 2017, I had no idea that that's what would stop half the farm from blowing away in 2018, when the weather was brutal and windy," he said.

So far this year, Mr Ranford has sowed 500ha of legume stubbles with sunflowers and millet, and intends to sow the remaining 700ha of legume ground.