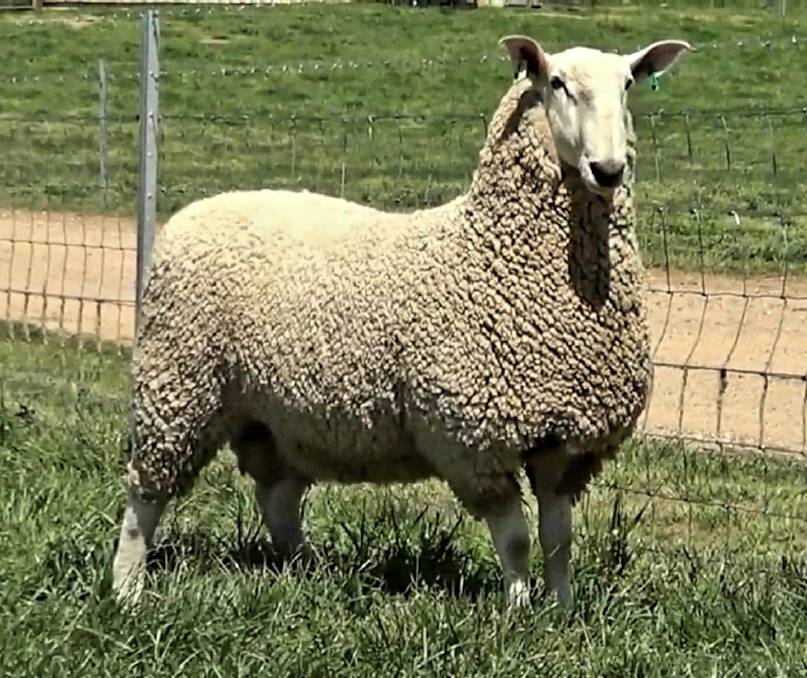 The top priced ram, before the sale

Keeping rams on their NSW property, rather than taking them to Horsham, paid dividends for the Gilmore family's, Baringa White Suffolk, Border Leicester and Australian White stud, Oberon, NSW.

Principal Ian Gilmore said Baringa was the only one of the seven studs represented at Horsham's annual Border Leicester sale that didn't have a physical presence at the auction.

But that didn't prove a disadvantage when they sold the top-priced ram for $6500.

"It was a sale with a bit of a difference, to what we normally have," Mr Gilmore said.

"I sold to two new clients, so I was thrilled with our result."

Described as a 108 kilogram medium wooled ram, it was sired by Baringa 17B040.

Mr Gilmore said he believed the buyers purchased the ram on the basis of its outstanding breed type.

"It's not an overfed ram, but structurally very, very sound with a great wool cover and presence," Mr Gilmore said.

"We have sold rams for more than that

"But, in the current market, we thought that was a very good result, given the fact people couldn't physically view our sheep."

Mr Gilmore said the rams were lighter, as he didn't think the sale was going to go ahead.

"We hadn't prepared them for a physical show and sale, which allowed us to present the rams in a more natural way, and show their 'doing' ability," he said.

"It's a very good time to be breeding Border Leicesters."

He recorded a fat measurement of 10mm and had a 35.5 micron fleece.

Most vendors sold all their rams.

"Being a live auction, it made $200-$300 more per head - all the vendors were very, very happy that they weren't taking them back home," Mr Attwell said.

"They got more at the sale, than what they would have done at home."

Mr Attwell said it was important that the sale went ahead, despite the obstacles caused by the virus.

"It's important to hold our position for 2021, so people know what we are doing," Mr Attwell said.

Rams went to properties and studs in western and northern Victoria, Gippsland, South Australia and NSW.

Have you signed up to Stock & Land's daily newsletter? Register below to make sure you are up to date with everything that's important to Victorian agriculture.