The Keith Merino Breeders offshears sale may have been entirely online but it still produced the highest price seen at any of the feature ewe sales for the season. THE Keith saleyards were empty last Friday but the bidding for some of the best Merino ewes in the area was in full swing online.

For the first time in history the Keith Merino Breeders Assocation offshears feature ewe sale moved entirely to an AuctionsPlus sale due to border restrictions and COVID-19 concerns around the inability of the crowd to maintain social distancing in the yards.

There were nearly 3400 bids by 218 registered bidders in the nearly two hour long sale.

The $342 top price was the best money paid at a SA offshears sale this season, eclipsing the $340 paid at Lameroo a fortnight earlier.

These was just a few dollars short of the $346 Keith offshears sale record set in 2018.

Mr Wallis said he had hoped to achieve $300 for their surplus stud ewes but was rapt to go beyond that and also to see them added to a self-replacing Merino flock.

He said a very good lambing in 2019 had enabled them to retain about half their ewe lambs but also gave them extra numbers in which to find a top line.

"I quoted them as the best ewes we've offered and I'll stick to that," Mr Wallis said.

"When we dispersed our commercial flock at Pinnaroo about 12 years ago, that was a complete dispersal, I would rate these way in front of them - even though they are classed out of the stud the genetics behind them is far superior."

The plain bodied ewes were breech treated at marking with liquid nitrogen which Mr Wallis said had enabled the lambs' wool to be marketed as non mulesed.

He is hopeful the Musters will shear them as a separate mob to capitalise on the non-mulesed premiums for wool.

Spence Dix & Co agent Luke Schreiber said the 73.8 kilogram sheep were the best surplus ewe hoggets he had been involved in selling.

"You don't often see ewe hoggets with that sort of weight in them. It is a very impressive line up with the frame but also the quality and way Peter and Marianne have polished them," he said.

"It would have been good to see them stand up in the saleyards, especially Keith where there are so many good sheep every year."

Glenlea Park's previous best price at the Keith sale was $308. 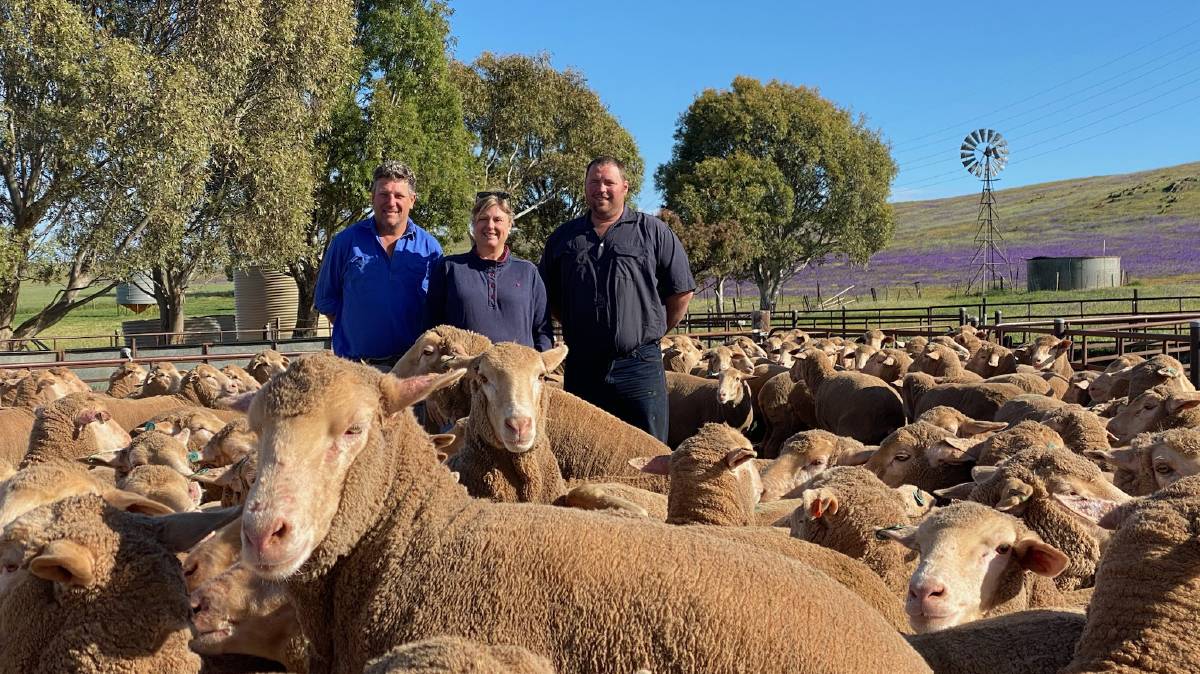 Justin and Anthea Lines, Gum Hill, Mount Bryan and Stuart Dale who manages the property where the $336 Merino ewes were run. The 267 ewes were September shorn and MN3 status.

The next best price of $336 was achieved by Justin and Anthea Lines,Gum Hill Pty Ltd, Mount Bryan, for 267 surplus stud ewes from their Gum Hill flock.

"There is a lot of effort that goes into them so it is good to be rewarded but we can only get the returns if people buying the stock get similar returns," he said.

Another consistent performer among the feature lines, Allen's Warrawee Park received $324 for 150 August shorn, Moorundie blds, as well $322 for another two lines of 200 and 250 head.

Densley Nominees, Keith, snared $228 for 265 big framed, 5.5 yo, Dalveen bld ewes which were some of the heaviest in the offering.

KMBA spokesperson Haydn Lines said most vendors achieved $20 to $30 a head more for their ewes than the 2019 sale but it was the same top quality operators who came to the fore.

"Six vendors averaged over $300 for their 1.5 year olds and in the mature aged ewes there were plenty of vendors over $200," he said.

He said while it had proven a successful sale format they hope to return to a physical auction in 2021.

Mr Schreiber said AuctionsPlus had "ironed out" the big price variation between lots and giving buyers the opportunity to switch between lots as they reached their limit on some pens.

"We didn't have those dips in the sale where you go 'they are a bit cheaper' and likewise pens that were far too dear because people thought they were going to miss out," he said.

"It was probably a fairer sale but from an auctioneer's perspective you like to be able to have that sale atmosphere to draw out the bids."