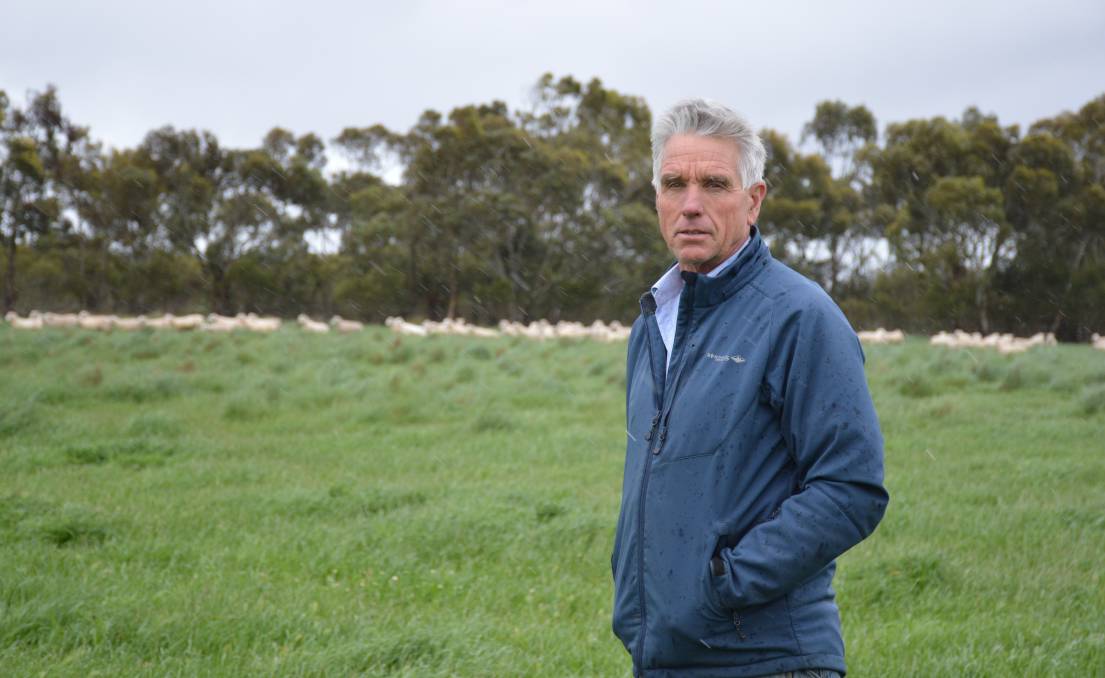 A firm grasp on costs and target markets has removed the emotion in decision-making for Patrick Ross.

A firm grasp on costs and target markets has helped remove some of the emotion in decision-making for Patrick Ross.

The Woolumbool producer, who runs 3200 ewes and 260 cows, has used a benchmarking group to help set the standard for his 1460-hectare flat water course and range country operation.

But while figures play a major part in his decision-making, he is also not afraid to try something new, experimenting with different breeds to get the best results.

Of the ewes on the property, about one-quarter are Merinos - "quality ewes at the cheapest price I can get them" - which are then joined with Ile de France rams, sourced from Vic breeder Trevor Hough, Heywood.

He has been using the Ile de France sheep for more than a decade, saying they were well-muscled sheep with clean breeches and heads and were good foragers.

The first-cross ewes are then joined with Poll Dorset rams from the Woolumbool stud for a second-cross lambs.

Mr Cross said he used to join rams in early December for a late April/May lambing, but found the earlier drop did not have any benefits in growth.

Instead, using November 15 as his deadline - all woolly lambs need to be off the property to avoid "grass-seed day" - he aims for a mid-June drop and a Boxing Day joining.

"That's when I want my peak lambing - it allows me 20 weeks to get to market," he said.

"If ewes are lambed onto green grass, it gives the lambs the best start."

Mr Ross said it was important to get nutrition right to realise the investment in genetics.

"If you are purchasing high performance rams with incredible data, and have ewes of incredibly good genetics, they can only realise their potential when they're fed right," he said.

He selects rams for medium to high growth rates - to get to market quickly - positive fat, and a top end high muscle area. He also looks at shear force, with his end customer in mind.

For the past three years, he has sold the second-cross lambs to Coles, aiming to sell at 15-16 weeks-old for an average 46-kilogram liveweight, to yield 22.5kg.

He aims for an average daily weight gain of 375 grams a day.

It's important to grow on grass, sell early and sell at weight. - PATRICK ROSS

Mr Ross said the relationship with Coles took some development, but it also needed to be maintained, which is why he was so particular about the impact of grass seeds.

"I consider myself to be a professional lamb producer, and I think in the modern day, we've got to consider ourselves professionals," he said.

"I want them to see me as a preferred supplier, so don't want to give them anything that's not perfect."

About five years ago, Mr Ross joined a benchmarking group through Holmes & Sackett, regularly meeting with representatives of 18 different-sized farms from the local area.

As well as making him very aware of his cost of production and target price, the group also helps him to assess decisions objectively.

"Benchmarking makes every enterprise owner accountable for their actions and when the numbers go up on the board, every figure is seen by everybody, with all figures critically analysed," he said.

"Hard questions are asked of individual operators and they have to be able to justify the position. When asked 'why are you forgoing this much money', over time you realise you can't be that emotional about it.

"It's important to grow on grass, sell early and sell at weight."

It was this critical thinking that has changed the way he is approaching this season.

In previous years, he has held on to 700 to 800 shorn lambs, fed them on fresh lucerne pastures, and sold them at the Christmas period on the spot market, when there is usually good demand for lamb.

But with present good demand for store stock and low returns for wool, he made the decision to sell them woolly by mid-November.

He said with the market the way it was, he could get a good price early, without the extra management costs of shearing, drenching and preferential feeding that might not be covered by the December price.

He will be able to use the feed for breeders.

He runs about 260 Angus composites, breeding a cross of Red Angus, Angus and Simmental, after experimenting to find the right mix.

For the past four years, he has been selling off-farm direct to Mid North feedlot Princess Royal.

"I do get a 10 cent (a kg) discount for red cattle, but I pick that up in the weights so it's not detrimental," he said.

Mr Cross sells the cattle at 10-11 months-old, aiming for his steers to be an average 420kg lwt and his heifers 380kg lwt.

Another area for investment is infrastructure.

In the past eight years, he has installed undercover yards and is upgrading equipment for ease of use.

He said while this might not pay off directly with income, it did have benefits in reduced stress for him and for the livestock.