While a string of tough seasons has led to below-average yields for Port Neill mixed farmer Tom Davey, he is hoping that a number of tweaks to his cropping program will show their worth come harvest. 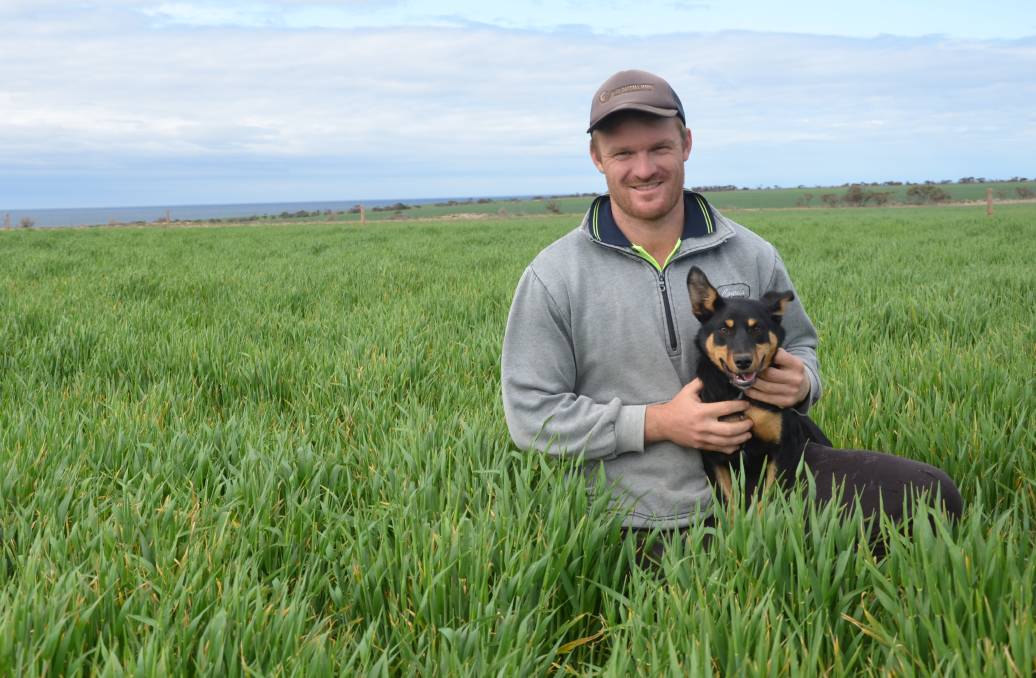 While a string of tough seasons has led to below-average yields for Port Neill mixed farmer Tom Davey, he is hoping that a number of tweaks to his cropping program will show their worth come harvest.

Along with his parents Brad and Deb, wife Hannah, and workman Kym Wurfel, Tom crops about 1800 hectares of wheat, barley and oaten hay, and 1000ha of vetch and medic pastures for his grazing program, comprising 2200 Merino ewes.

Seeding rates were increased this year, with the addition of two Atom Jet paired row openers to Tom's seeder.

"I was pretty happy with the results, it seemed to help the germination rate," he said.

"We'll add a few more (paired row boots) next year, maybe do 10 or a dozen - two you can notice a change but you can't necessarily follow it and measure the benefits."

"We only had the narrow press wheel rubber, they recommend a wider press wheel just because the grain is sitting out wider and the narrow one can push the grain into the side of the row a bit too much, but it seemed to work well."

Tom has also used a deep ripper for the first time this year, with a custom-made frame from Lienert Engineering in Kimba, to which he bolted on tynes from Tilco Ag Systems.

He ripped 240ha of his vetch and medic pastures in March at a depth ranging from 40 centimetres to 55cm, sowing a mixture of wheat and barley onto the ripped country in April, 15 degrees offset from the rip line.

"We ran a lot of inclusion plates on the ripper, trying to mix that sand up and get a better germination.

"It meant we had to go a bit slower - we had started at 6.5 kilometres an hour, but if you go too fast the topsoil remains at the top of the profile, so we slowed to 5km/hr.

"The effectiveness of the rip will vary, but there will be places where the crop will have three times the potential of unripped ground."

"When we did get the rain, it covered a lot quicker than the non-wetting soils that we hadn't ripped, that was still vulnerable (to erosion) anyway," he said.

Other recent changes have included a fertiliser switch to now use Croplift 19, to boost sulphur levels, and also the coating of cereal seed in Gaucho for the past three seasons, to protect against Russian wheat aphid. While RWA has not been a major problem for the Daveys in recent years, the insecticide is used as a preventative treatment.

"For our barley varieties, we've always cropped Fathom and Spartacus, and in the wheat, we've used Scepter and Chief, but last year we had a go with Vixen as well, just to see how it would go," Tom said.

"This is our second year using Vixen, it's supposedly the new Scepter, but it has a bit of a shorter season and it yields pretty well. We had a bit in last year and it yielded better than the Scepter."

Tom sowed 10 hectares of Vixen last year as a trial, and harvested about 1.3 tonnes/ha, compared with 1t/ha for Scepter in the same paddock.

"Historically, we've worked on a yield average for wheat of about 1.4t/ha, and so while neither of those yields are that exciting, as a percentage, it's quite the increase," Tom said.

This year, Tom has sown 100ha of Vixen, and aims to sow half of next year's wheat program with the variety.

"If it keeps going well, we'll keep pushing it," he said.

After reasonable rainfall in August, the dry start to September was followed by 20 millimetres of rain at the end of the month. Nearly 45mm of rain has fallen on Tom's property so far in October, with the late rain expected to be slightly detrimental to Vixen yields.

"It's a bit of an earlier variety - the Scepter might use this rain a bit better than what the Vixen will, but I think everything is pretty much far enough through now that it will fill the grain it's already started filling," he said.