Bidding action was hot at Koonawarra's 22nd annual sale at Angaston on Wednesday, with a genuine buying gallery helping the stud to improved top prices for the White Suffolks and Border Leicesters, while the Poll Dorset line-up also attracted good interest. 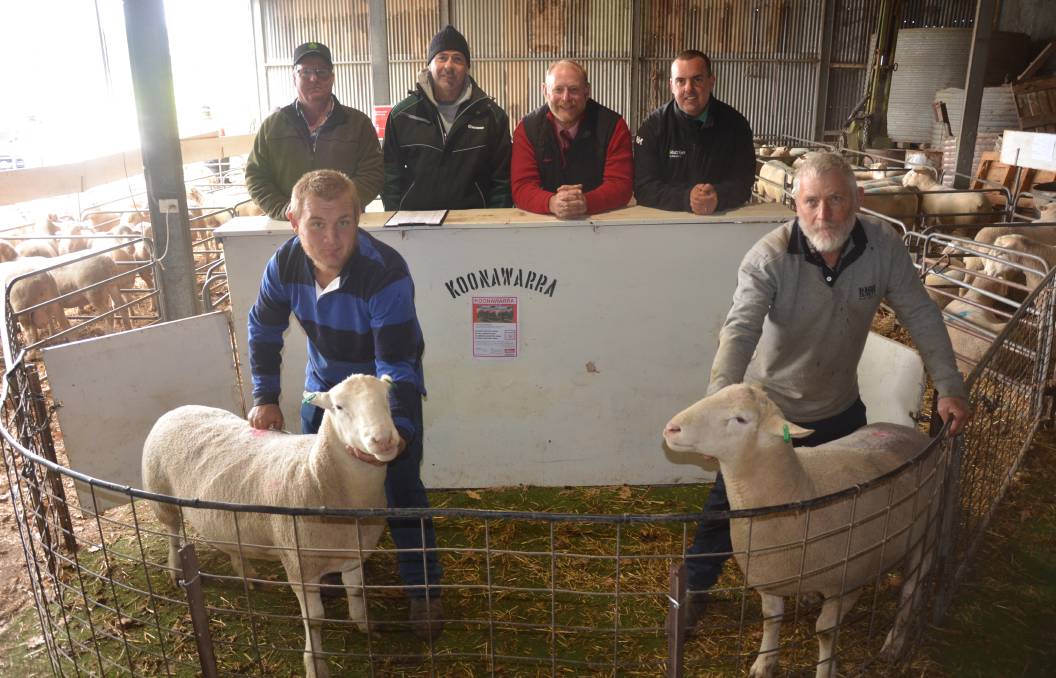 Bidding action was hot at Koonawarra's 22nd annual sale at Angaston on Wednesday, with a genuine buying gallery helping the stud to improved top prices for the White Suffolks and Border Leicesters, while the Poll Dorset line-up also attracted good interest.

A full clearance was achieved in the the Border Leicester lineup, with all 24 sires sold, topping at $2000 twice and averaging $1712 - $769 better than last year's Border Leicester average of $943.

Sired by Wingamin 171303, the ram was knocked down to Robert Tilbrook, Tilbrook Farming, Minlaton, who also bought one other White Suffolk at $2000.

Mr Tilbrook had missed the Koonawarra sale for the past three years due to shearing commitments, and admired the sire for its shape and length.

"It had a nice long smooth barrel, and was smooth over the shoulder with a clean face," he said.

The two Border Leicesters which made the breed's top price of $2000 had Border Dollar Indexes of 113.8 and 120.6, and were both bought by Eagle Park Pastoral, Lyndoch, which bought a total of six Border Leicester sires, overall averaging $1733.

The Border Leicesters in particular were very even with a good wool type, and all in all, it was a solid day. - TOM PENNA

Along with Eagle Park Pastoral, the Border Leicester offering was dominated by two other bidders - Saltbush Ag, Booborowie, which bought six to $1900, averaging $1867, and BJ&CA Oster, Dowlingville, securing five to $1800, averaging $1420.

Lots 81 and 82 made the top prices in the Poll Dorset offering, both secured by repeat client HA&KL Blenkiron, Springton.

The Blenkirons, who bought one other Poll Dorset at $800, have been clients at Koonawarra for eight years, traditionally having bought from the White Suffolk line-up.

Koonawarra stud principal Mark Grossman was happy with the Poll Dorset line-up, which was sired by Newbold 170100.

"The Poll Dorsets were an extra breed to add on, there are always a few of our clients who use Poll Dorsets, so we thought we would give those clients the option of supplying them with that breed here at Koonawarra," Mr Grossman said.

"We'll build our numbers with the Poll Dorsets overtime, this year was about letting people see the lineup of Poll Dorsets here on offer."

Thirty of the 33 registered buyers made purchases, with volume buyers including Mimited Pty Ltd, Orroroo, which secured ten White Suffolk rams to $1400, averaging $1020, and a Poll Dorset at $800, while SE Mattey and Co, Terowie, took home eight White Suffolks to $1100, averaging $925.

Southwark Pastoral, Kapunda, bought seven White Suffolks at $800, and another two at $700.

The sale was conducted by Elders and Nutrien, with Elders' Tom Penna and Nutrien's Leo Redden on the rostrum.

Mr Penna said it was a "solid sale", with good depth and thickness at the top end of the catalogue.

"Koonawarra had a sound day over three breeds, there was a lot of sting in the Border Leicesters, and the top end of the White Suffolks and Poll Dorsets, and there were bulk orders here to handle the numbers," he said.

"The Border Leicesters in particular were very even with a good wool type, and all in all, it was a solid day."