Bordertown growers find success with grazing irrigated lucerne that is then harvested for seed. 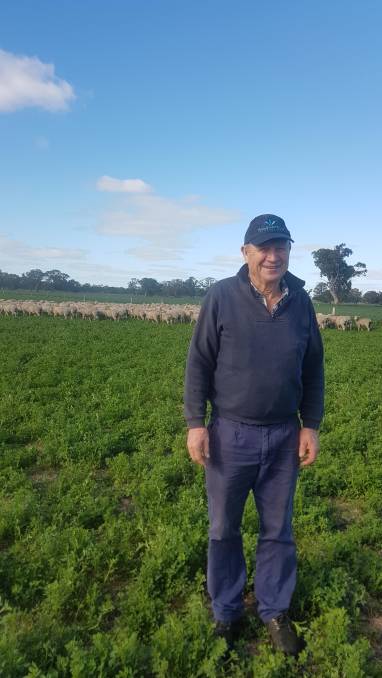 Greg and Wendy Ryan are achieving whole-farm system balance with production of prime lambs and growing lucerne for the seed market in the medium rainfall zone near Bordertown.

The couple's 405-hectare property is split into 150ha of border-check (flood) irrigation area, 40ha of land irrigated under pivots and improved dryland pastures on remaining paddocks.

Growing lucerne on the irrigated areas, the Ryan's are among the 250 seed suppliers for the national industry through the Australian Seed Authority (ASA) certification program.

As well as providing the business with a diversified income stream to help manage risks, this perennial legume crop gives them another grazing option for their sheep flock to complement dryland pastures.

The couple run about 1000 head of Merino ewes, half of which are mated to Merino sires for flock breeding replacements and the other half to Poll Dorset rams for prime lamb production.

Joining occurs in November for the Poll Dorsets, which come from Allendale stud, and a few weeks later for the pure Merinos, which are based on Andoma bloodlines.

Average conception rates are typically just over 100 per cent across the whole flock.

Mr Ryan said it was difficult to push conception and lambing rates higher than that when joining just before summer, due to seasonal limitations on feed.

But he said the system was designed so the ewes producing crossbred Poll Dorset lambs could be grazed on high value lucerne paddocks during the lambing period and throughout the winter months.

Lambing at the Ryans starts in April for these first-cross mobs, followed by the pure Merinos in May-June, in order that the first of the crossbred progeny are ready for sale during September and Merinos can be shorn before summer.

Mr Ryan said the timing worked because lucerne seed crops were usually growing well at that time of year, after being harvested the previous year, irrigated and then watered from autumn rains.

"It means the crossbred lambs born on to the lucerne areas immediately get used to grazing this really high quality feed to kick-start their early growth," he said.

"And the ewes get optimum nutrition from the perennial crop during lactation and their recovery period - without the problem of scouring.

"Mobs grazing the lucerne areas are split up and closely managed to ensure the perennial is not overgrazed, as we then harvest it later in the year for seed sale."

It is widely known that ewe energy requirements increase slowly during early pregnancy, accelerate in the final 50 days before lambing and then rise again in lactation - to peak about 25 days after lambing.

Ewes who have multiple lambs have even higher nutritional needs.

This compares favourably with perennial ryegrass, chicory and tall fescue.

Trials have shown metabolisable energy of lucerne averages 11.0MJ per kilogram of dry matter across the year and lamb growth rates of 300 grams per head per day are achievable when grazing the perennial.

Mr Ryan said he did not use the irrigated lucerne crops for the self-replacing Merino ewes, which lambed in early winter on to areas of improved dryland grass-legume pastures.

He said these ewes received supplementary feed - mostly hay - when seasonal conditions warranted the extra nutrition and it was economic to do so.

Merino wether lambs and those ewe lambs that are not chosen for future breeding are shorn once - before the summer - and sold at about 9-months-old in late January-February.

"We need to shear the Merinos before pasture grasses turn and produce seeds in the summer," Mr Ryan said.

"If we leave it too late, we risk wool contamination with grass seeds."

The Ryans sell the fastest growing Merino-Poll Dorset cross lambs in September when they hit target liveweights of about 40 kilograms, to produce an 18-22kg carcase.

Top lines often reach liveweights of about 50kg to produce a 24kg carcase.

"The aim is to hit the market early, before any late season cold snaps and to take advantage of price premiums that might be available before the traditional spring 'flush' of lamb supplies hits the market," Mr Ryan said.

To get the best productivity from their sheep and lucerne enterprises, the Ryans aim to breed fast-growing, high meat-yielding lambs.

Each year they brief their livestock agent to source Poll Dorset rams from the Allendale stud, at Bordertown, based on both visual conformation for soundness and body depth and on objective measurements from Lambplan Australian Sheep Breeding Values (ASBVs).

"We are seeking the rams that perform well in the ASBVs system for early growth, weight, eye muscle depth and the carcase plus index," Mr Ryan said.

He said because the Allendale stud was situated nearby, he knew the rams would stand up well to local conditions at joining - and sire lambs that would adjust and achieve optimal growth given the seasonal and environmental challenges in the area.

"We have been long-term clients of Alastair, Jayne, Graham and Prue Day at Allendale, and we are more than happy with the genetic direction of their Poll Dorset breeding," he said.

"Our opinion is also backed up by the stud's strong position in the key ASBV breeding traits and its success in the rings of many competitions over many years."